By Elizabeth McSheffrey | News | June 7th 2016
#285 of 1383 articles from the Special Report: Race Against Climate Change 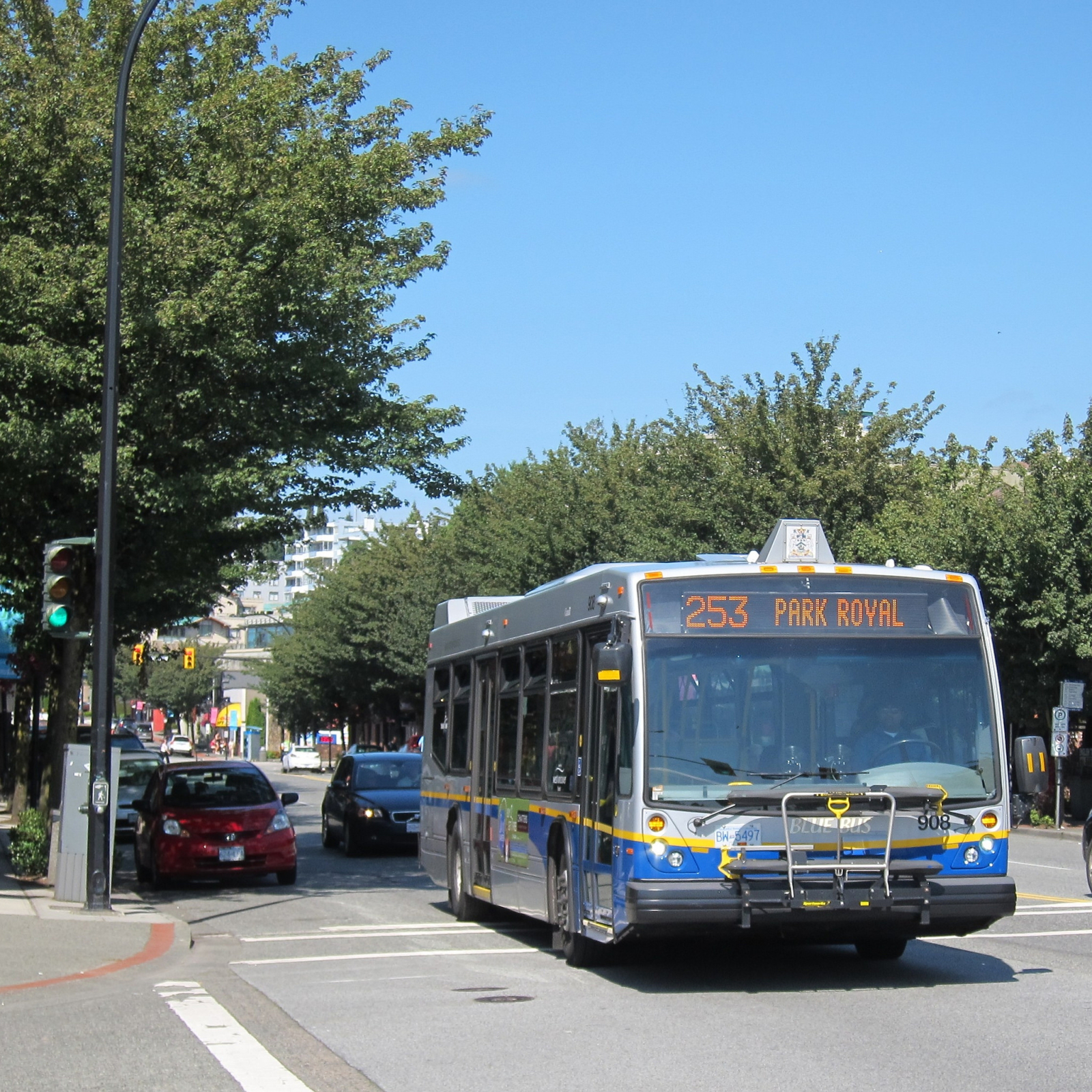 Less than two months after Vancouver was ranked as having the worst traffic congestion in all of Canada, a new report has found the B.C. government guilty of chronically underfunding public transportation and failing to meet its own transit investment targets.

And as billions of federal dollars — dedicated in the 2016 federal budget to reversing "lost productivity" in provincial public transit systems — remain up for grabs from Ottawa, the report's authors believe there has never been a better time for B.C. to reverse the trend of shortchanging transit users.

"It's not too late," said Ian Bruce, science and policy director for the David Suzuki Foundation and co-author of Breaking Gridlock: B.C.’s transit investment deficit and what can be done to fix it. "What’s really changed the game is that the federal government has stepped up to provide 50 per cent of the investment towards new public transit infrastructure in the country."

Many environmentalists and urban planners believe that a more efficient public transit system (particularly dense urban areas like Vancouver) would save users time and money, while bringing the province closer to its climate targets by making it easier to abandon personal vehicles.

In 2008, the B.C. government announced a new Provincial Transit Plan that promised $4.75 billion in provincial funds over 12 years to invest in critical public transit infrastructure, including nine high-capacity bus routes, 1,500 clean energy buses and major rail expansions for the SkyTrain, Millennium and Canada Lines. But eight years into that 12-year plan, the David Suzuki Foundation report found that only 23 per cent per cent ($1.1 billion) of the provincial contributions were actually realized.

While the B.C. Ministry of Community, Sport, and Cultural Development (responsible for the province's TransLink system) recently announced an additional $245 million over three years to fund such projects, the government is still not even close to meeting its initial promise. Critics further argue that the province's one-third funding support for the transit plan developed by Metro Vancouver's mayors is much less than what it suggested was a fair provincial share in 2008. 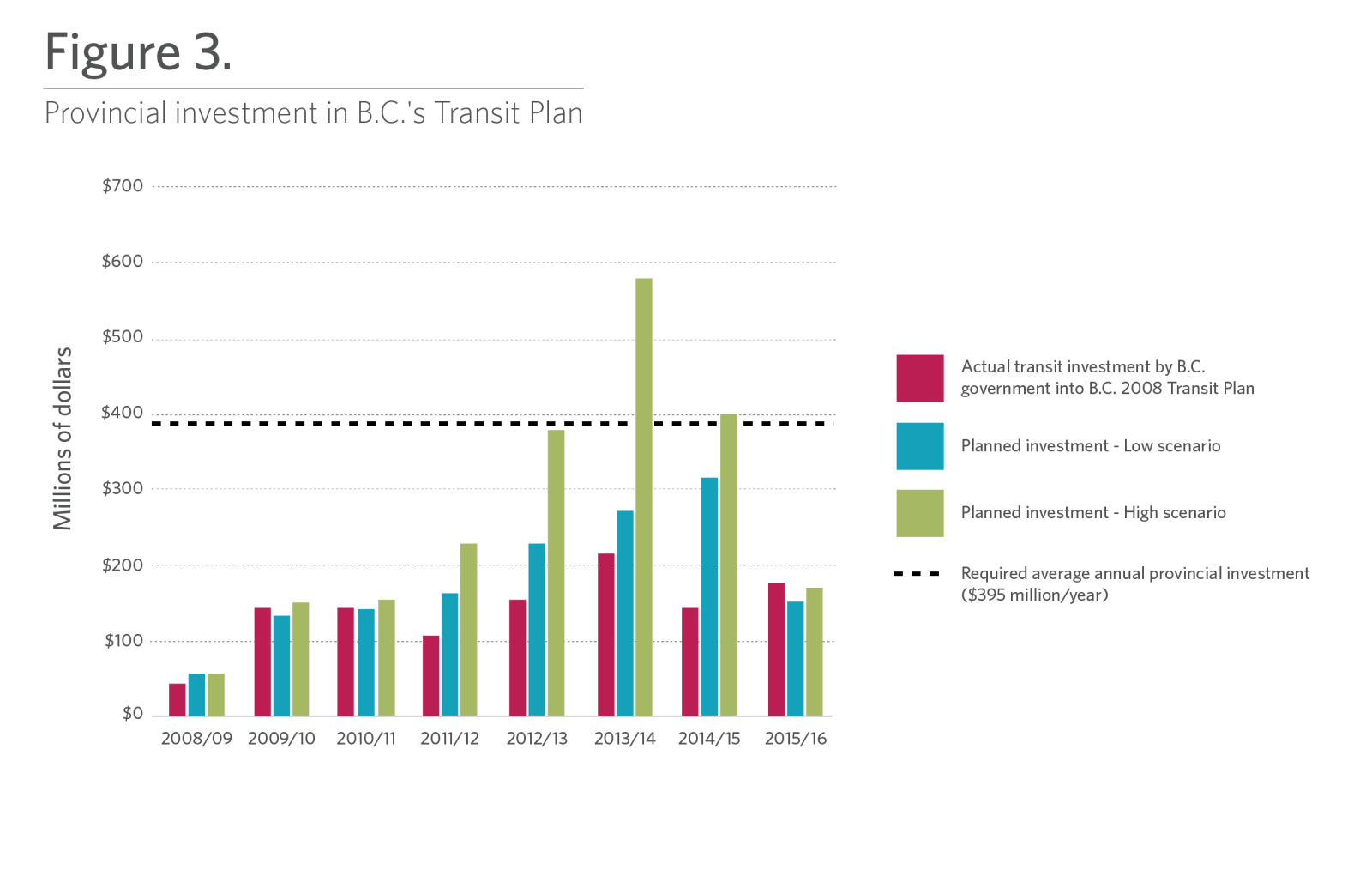 "These years of shortfall in investment have begun to threaten the gains won through previous decades of strong policy," said the report, published Monday. "The traffic congestion B.C. is experiencing today is a direct result of underfunding transit.

According to research by Clean Energy Canada and the C.D. Howe Institute, traffic congestion costs Metro Vancouver alone up to $1.2 billion per year as residents decide to stay home, skip dinner out with friends, pass on a hockey game, etc. If the B.C. government had simply adhered to the approach and funding model outlined in its 2008 plan, explained Bruce, these losses could have been avoided.

“It will only worsen if a solution isn't found," he told National Observer. “The province and the mayors need to put their political differences aside and come to the table to work out a fair funding agreement. If it had held the same position it did back when it developed its own transit plan, I think we would have a deal."

There has never been a better time than now

The report, which Bruce co-authored, suggested that if the B.C. government had committed the same level of funding it proposed in 2008, but supported it with a detailed fiscal plan, it would have already secured a portion of new federal infrastructure funds, which include $3.4 billion in transit over three years, divvied up according to each province’s share of national transit ridership.

Following an unsuccessful plebiscite on funding major transit infrastructure in Metro Vancouver in early 2015, it argued, the provincial government is primed for such an investment, having already completed a comprehensive transit plan for the region, half the funds needed to carry it out and the financial ability and legislative power to produce the remaining investment.

Despite this favourable position however, the provincial budget in February 2016 called for declining transit investment over the next three years.

"[Unfortunately] transit doesn’t seem to be on the same playing field," said Bruce. "Other infrastructure that gets approval quickly and there’s no disputes over funding. It's sort of perplexing to see the B.C. government’s position on transit from 2008 to today."

The Suzuki Foundation report proposed proportional fair-share funding for transit projects as a potential solution. That would require the federal government to provide 50 per cent of funds, while municipalities provided 10 per cent, and the provincial government providing one-third of the funding. The provincial government would then need to fund the remaining seven per cent gap by introducing laws to create new revenues, such as tolls or taxes.

When asked about the report, B.C. Minister of Community, Sport, and Cultural Development Peter Fassbender touted his government's record on public transit, explaining that its current funding model already works.

"This province has been and continues to be committed to investing in transportation because we know it helps build livable communities, affordable communities, provide housing supply and that all works together," he told reporters at an event on Monday. "I don’t think transit will ever reach everybody’s desires, but... I think we’re doing a great job when you look at other regions, but there’s more to be done and we’re prepared to be a contributor to that process.”

But it isn't only time, effort, and money at stake when it comes to transit in B.C., Metro Vancouver, and cities all over Canada — it's the carbon emissions as well. According to Matt Horne, associate regional director of the Pembina Institute in B.C. and a member of the province's expert Climate Leadership Team, efficient public transit goes a long way in reducing emissions.

“[Public] transit doesn’t solve all of that, but opportunities to give people good choices to get into transit and move people out of single occupancy vehicles make that transition to lower carbon transportation that much easier," he explained. “If you were to just take today — a person switching from a household driving a car all the time to taking transit all of the time — there’s a fairly big reduction there because most of our cars are powered by gasoline and diesel.”

It's an added benefit the Suzuki Foundation report acknowledged, along with shorter commutes, more room for green space, and improved air quality.

Though Fassbender did not indicate whether the province would adopt any of the suggestions in the report, B.C. is expected to announce a new climate leadership plan by the end of the month based on recommendations from its Climate Leadership Team. These include initiatives for transportation such as use of low-carbon fuels and investment in zero-emission vehicles.

Horne, who helped develop the recommendations, said investments in public transit go hand-in-hand with these green initiatives, and it's not a matter of picking one or the other. Getting everyone out of their cars and into buses alone wouldn't solve the problem, he explained, but neither would widespread use of electric vehicles:

“The province has a high bar it’s going to have to meet if it moves forward on the climate challenge," he said. "I think the report from the Suzuki Foundation today finds they’ve been falling short on that from a transit investment perspective. Right now, we’re still in a situation where carbon pollution is going up in the province and we need a plan that changes that."