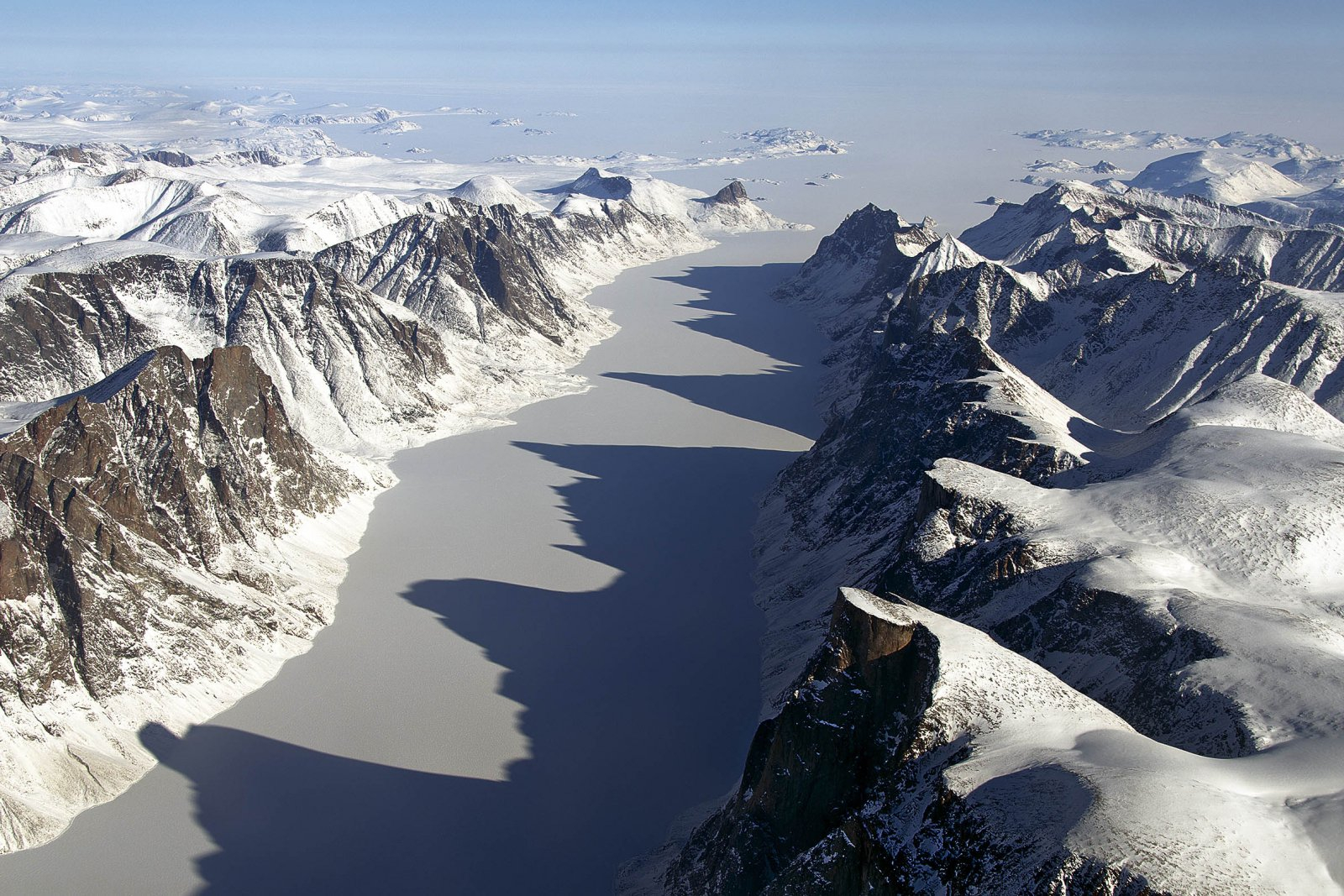 A fjord on Baffin Island looking east towards the Davis Strait, an area of shoreline that was endangered by seismic drilling for oil. Photo from Wikimedia Commons.
Previous story
Next story

One of the planet’s largest oil companies has just walked away from a large swath of oil and gas reserves in the Canadian Arctic. But it says it hasn't given up altogether on the prospects of drilling for the fossil fuels in the pristine waters of the North.

Royal Dutch Shell announced it was relinquishing 30 of its oil and gas leases around Lancaster Sound - a region of the Arctic Ocean that the government and local Inuit groups have long tried to protect as a vital habitat for threatened mammals such as narwhals, beluga whales and polar bears.

The announcement, at an oceans summit hosted in Ottawa by conservation group WWF-Canada, will allow the federal government to expand efforts to protect the region, its local communities and its threatened species.

Shell Canada, which was also facing a legal challenge launched recently by WWF-Canada to cancel the leases, said it received no compensation or tax receipts from the transfer.

The company’s president, Michael Crothers, dismissed questions asking whether the lawsuit was a major factor in Shell's decision. He explained that Shell had already been negotiating a plan to transfer the leases over to Nature Conservancy Canada, which is returning the permits to the government.

Shell is walking away from its leases at a time when energy companies are struggling in the face of slumping oil prices that are making it difficult for them to make any profits on costly and risky projects such as Arctic exploration. Some of the leases are more than 40 years old and were not being used due to an ongoing government moratorium on development.

But the negotiations were motivated by an announcement last December when the Liberal government promised to achieve a goal of protecting 10 per cent of the country's marine areas, Crothers explained.

“It’s just something that we really wanted to do together with NCC and the government and with the Inuit community,” said Crothers. “Hopefully it’s a catalyst to actually protect this really remarkable area and hopefully inspire other companies and other groups to come together to find ways to contribute to this goal of 10 per cent conservation that the government has put out for us.”

NCC said it didn't receive any compensation from Shell for handling the transfer but explained that the oil company has paid it for other conservation projects in the past.

Meantime, NCC's president and CEO, John Lounds, said he was encouraged by the announcement.

"I think we’re into a new era where we’re not putting economic interests and environmental interests at loggerheads," said Lounds. "It's time to find ways in which we can all work together to make these things happen.

David Miller, the president of WWF-Canada, also credited the Liberal government for inspiring the oil company to work with the conservation groups.

“Could you imagine having had this conversation two years ago?” he asked. “This is a testament, I think, to the government also setting a really positive tone and saying, business, environmental organizations, indigenous organizations and the government can work together in Canada’s interest. and that’s what’s happened today.”

“I would like to congratulate the parties involved in today’s announcement, but remind government that partnerships with Inuit are essential and necessary in the development of a Lancaster Sound National Marine Conservation Area," said Natan Obed, president of Inuit Tapiriit Kanatami. "This delicate ecosystem represents our natural wealth as a people. I am encouraged to see such momentum towards protecting these waters for future generations of Inuit."

Although Shell has also walked away from Arctic drilling activity in Alaska, largely attributed to excessive costs and low commodity prices, Crothers said it still saw some possibilities for new exploration in the region next to Lancaster Sound.

He said the government has estimated some of the permits in that area could hold more than two billion barrels of oil and over nine trillion cubic feet of natural gas. The company is also pursuing offshore development in Atlantic Canada.

“We look at our opportunities in the North on a case-by-case basis and we have still have that in our portfolio,” Crothers said. “In fact there is natural seepage of oil and gas into the Baffin Bay area.”

Newly-minted federal Fisheries Minister Dominic LeBlanc and Environment Minister Catherine McKenna both reiterated that the government was committed to protecting up to 10 per cent of its marine areas by 2020. LeBlanc said that Canada is now protecting about one per cent of its marine areas but its target would increase the amount of protected areas to a size that is roughly equivalent to all of Canada’s Atlantic provinces.

Shell has helped the government take an important step toward meeting its goal, McKenna added.

“We don't always see this,” she told reporters. “I am always thrilled when I see unusual partnerships. When I see environmental NGOs working together for business, because it sends a message that we’re all in this together and I think it’s just a thrilling development for Canada.”

She said the next step is to consult with Inuit communities and local governments about how to protect Lancaster Sound.

Miller, from WWF-Canada, added that Prime Minister Justin Trudeau had given his ministers an “impeccable” mandate to improve marine protection while also providing federal funding to ensure that they can deliver.

“I certainly didn't think expect, when I joined WWF Canada a couple years ago, that I’d be standing here and saying that one of Canada’s major oil companies has done the right thing. But they have,” said Miller, who was previously mayor of Toronto.

Dominic LeBlanc "humbled" to follow in the footsteps of his father, Roméo Leblanc as fisheries minister

LeBlanc, who named to be the minister of the Fisheries and Oceans Department last week, following the surprise resignation of Hunter Tootoo, also said he was embracing his new mandate as he spoke to the summit.

“I was humbled but also excited by the opportunity it presents me, and your forgive me for saying this at the beginning of my mandate … to follow footsteps of father, who held a similar job 30 years ago,” LeBlanc said, in his first major comments since taking over the new portfolio, in addition to his other responsibilities as the government house leader.

He noted that his father, Roméo LeBlanc had convinced then-prime minister Pierre Trudeau to add “oceans” to the fisheries mandate when he was sworn into that same portfolio in the 1970s.

Dominic LeBlanc said his own goal would be to continue to protect oceans, noting that they feed billions of people, support countless jobs and are a valuable source of clean energy.

“The oceans might appear to be in good health, but we know… that human activity is their greatest threat,” LeBlanc said. “Overfishing, the loss and destruction of habitat. Marine pollution, and the warming of the sea temperatures is endangering the oceans and their ecosystems… Together we must do more to protect our oceans and this is why we are here and you are here today.”

He added that the federal government understands that healthy oceans contribute to healthy people and a healthy economy, supporting trade, commerce and development.

“We think it’s critical for Canadians and for the world to hear what scientists are telling us,” LeBlanc said. “We think one of the most important things our government has done in the few months we’ve been in office is to invite scientists to speak freely and openly and publicly about the challenges facing our planet, our oceans and a whole myriad of issues that Canadians are concerned about.”

A major win for Arctic conservation

Wednesday's announcement could prove to be a major win for Arctic conservation, ending long-standing delays in efforts to protect Lancaster Sound - a home to 70,000 narwhals, 2,500 polar bears and 20 per cent of the Canadian beluga population. The region is believed to hold significant oil and gas reserves, but companies have not yet demonstrated that they can extract the resources safely.

"I think this is a great step, because it's not just setting up the marine conservation area, it's the size of the marine conservation," said McKenna. "We have a great announcement which may allow us to actually double the size. That's huge and it's a very exciting announcement. It's a huge priority for me and I'm going to be working extremely hard this fall. I know all Canadians are very excited about seeing us work together to protect our oceans."

The area is about 1.5 times the size of Prince Edward Island, the CBC reported on Wednesday.

“We are now one big step closer in a 40-year process to protect an area that’s been important to Inuit for millennia. Lancaster Sound, Tallurutiup Tariunga in Inuktitut, is one of the Arctic Ocean’s richest marine habitats – an area of stunning natural beauty and deep cultural significance. The inclusion of these lease areas helps complete what will be one of Canada’s boldest protected areas and will allow for boundaries that are consistent with community aspirations for Lancaster Sound,” said Christopher Debicki, Nunavut Projects Director, Oceans North Canada.

WWF-Canada had launched the legal battle to cancel the leases based on research done by Vandana Erin Ryder, a lawyer with Parvati.org, a non-profit organization that has been lobbying to create an international marine park in Canada's North. The research suggested that the permits may have actually expired in 1979.

But some internal documents, released in response to freedom of information requests, revealed that a Shell representative had told government officials in May 2014 meeting that the company expected to receive compensation for walking away from the leases.

The announcement comes at a time when several major oil companies had been seeking concessions from the federal government to pursue risky and costly Arctic drilling projects. A consortium of companies - Imperial Oil, ExxonMobil and BP - had asked the previous government to change a federal environmental law so that it could get an extension on their existing drilling rights without losing hundreds of millions of dollars in deposits that were paid to secure their leases.

Shell, which was also holding Arctic leases in the United States, had previously announced in 2015 that it was withdrawing from its U.S. drilling projects, despite spending more than $7 billion USD in exploration costs. At that time, it explained that it determined further exploration was not warranted.

I love what I read in the