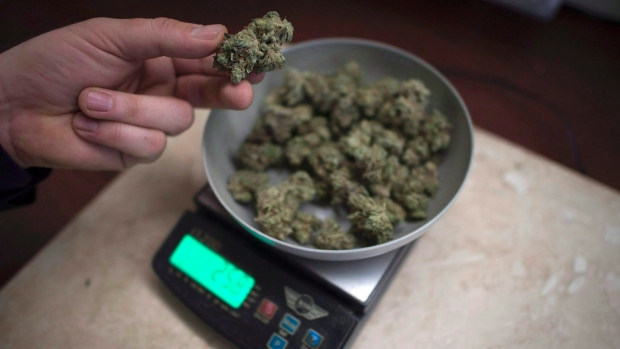 Marijuana is weighed at a Vancouver dispensary on May 2, 2015. File photo by The Canadian Press.
Previous story
Next story

The Liberal government has no plans to decriminalize marijuana before legalizing it, Attorney General Jody Wilson−Raybould said Monday.

Doing so "without ensuring the appropriate controls are in place for its safe production, distribution and access would be giving a green light to dealers and criminal organizations to continue to sell unregulated and unsafe marijuana to Canadians, especially children and youth," Wilson−Raybould told the House of Commons.

She said the Liberals would therefore not be supporting an NDP motion urging the federal government to immediately decriminalize simple possession of marijuana.

Prime Minister Justin Trudeau campaigned on a promise to legalize, regulate and restrict access to marijuana, and his government plans to introduce legislation next spring.

But New Democrat MP Murray Rankin said that could take two years to come into effect, leaving many Canadians at risk of criminal records for something the government doesn’t believe should be a crime.

Rankin said all it would take is political will, since Wilson−Raybould has the power to direct prosecutors to avoid pressing charges.

Rankin said it has created confusion among police and pot consumers alike, especially as it appears the law is applied unequally across Canada.

But Wilson−Raybould disputed the idea that the law is in limbo.

"The law is enforced and it should be obeyed," she said.

"We know it is impossible to arrest our way out of this problem," Philpott said April 20 in a speech at a special session on global drug policy as she revealed the promised legislation could come in spring 2017.

That same day, Trudeau said it would be irresponsible to decriminalize marijuana in the meantime.

"We believe in the legalization and regulation of marijuana because it protects our kids and keeps money out of the pockets of criminal organizations and street gangs," he said.

"The fact of the matter is that decriminalization ... actually gives a legal stream of income to criminal organizations. That is not what anyone wants in this country."

Trudeau acknowledged in a 2013 interview with the Huffington Post that he had smoked pot occasionally, including once after being elected as an MP.

Trudeau also revealed in that interview that his youngest brother, Michel, had been charged with marijuana possession not long before he died in a 1998 avalanche.

That influenced his choice to first support the decriminalization of marijuana, Trudeau said, which later changed to legalization after he was convinced it was the best way to keep it away from children.