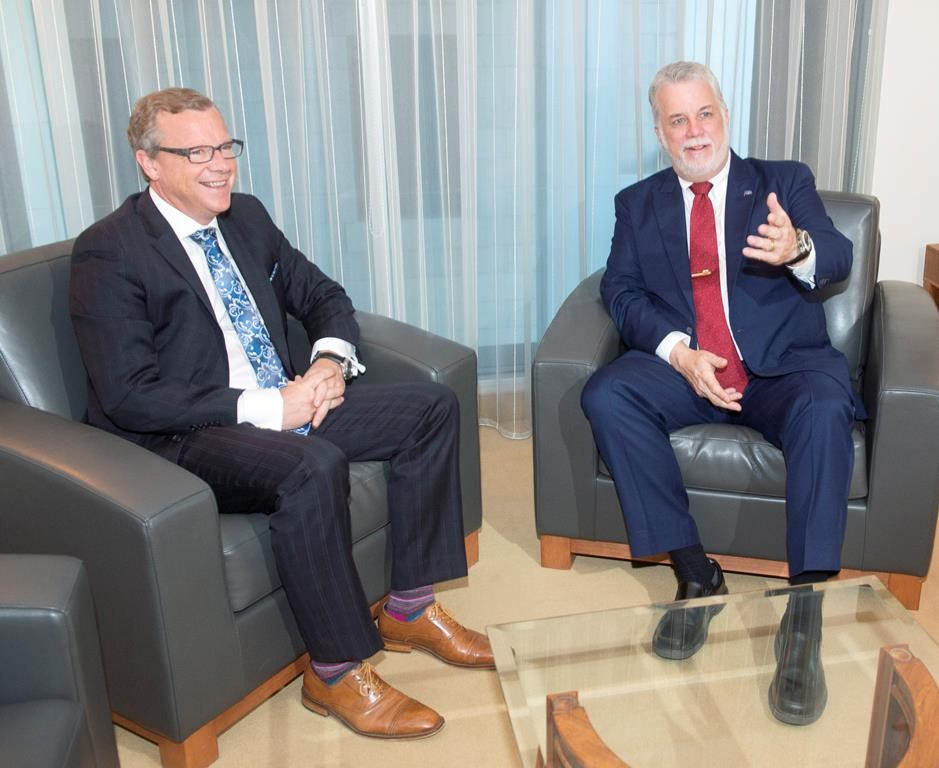 Saskatchewan Premier Brad Wall took his pro−Energy East road show into relatively hostile territory Thursday as he met with Quebec counterpart Philippe Couillard in a province where the proposed project has many detractors.

"Pipelines aren’t perfect, but they are the safest and most efficacious way to move energy across the country," Wall told a news conference alongside Couillard.

But while pitching the pipeline as an "opportunity for nation−building" that could link the country much as the Canadian Pacific Railway did in the 1880s, Wall acknowledged Quebec has "unique questions" given most of the new construction for the $15.7−billion project would take place in the province.

"The fact remains that the new construction is almost all in this province and that does change things for this province," he said. "The people of Quebec will have different questions, and rightfully so. And it is up to the proponent to answer those questions."

The most recent official opposition to the TransCanada (TSX:TRP) project surfaced Wednesday when the Assembly of First Nations of Quebec and Labrador formally stated it was against it.

Couillard called the First Nations announcement "a significant event" that "should not be downplayed."

In May, Canada officially adopted the United Nations Declaration on the Rights of Indigenous Peoples, which Couillard pointed out includes obtaining free and informed consent when it comes to resource development.

Exactly what this means "will have to be resolved and made explicit at some point," he said.

Consultation with First Nations groups is one of the province’s seven conditions that must be met before the project is approved, Couillard said.

Many politicians, environmentalists and other critics in the province also believe the ecological risks outweigh the economic rewards.

In the past, Wall has chosen to sharply rebuke the pipeline’s detractors, pointing out Quebec will receive about $10 billion in equalization payments this year.

When a group of Montreal−area mayors came out against the pipeline in January, Wall took to Twitter to suggest they "politely return" Quebec’s share of those payments.

On Thursday, he struck a more conciliatory tone.

He admitted to feeling "a certain frustration" at the attempts to block his province’s efforts to bring its resources to market, but chose to acknowledge Quebec’s concerns.

"I’m going to continue to make the case for the pipeline, but I want to do so respecting that, for Quebec, this pipeline is different, it’s new construction, it’s under the St. Lawrence (River), it’s through a very populous area, and it must meet a high standard," he said.

Wall argued that transporting oil by pipeline is safer and better for the environment than moving it by rail or truck and would also reduce Canada’s dependence on foreign imports.

Energy East would carry more than a million barrels of western Canadian oil a day to refineries in Eastern Canada and a marine terminal in Saint John, N.B.

Wall’s swing through Quebec followed a visit to Saint John on Wednesday and one a day earlier to Toronto, where he spoke to the Empire Club of Canada.

He and Couillard also discussed other topics, including carbon credits and federal health funding.

The two premiers announced an agreement to work together on developing carbon capture technology, which involves trapping carbon dioxide and transforming it for other uses.