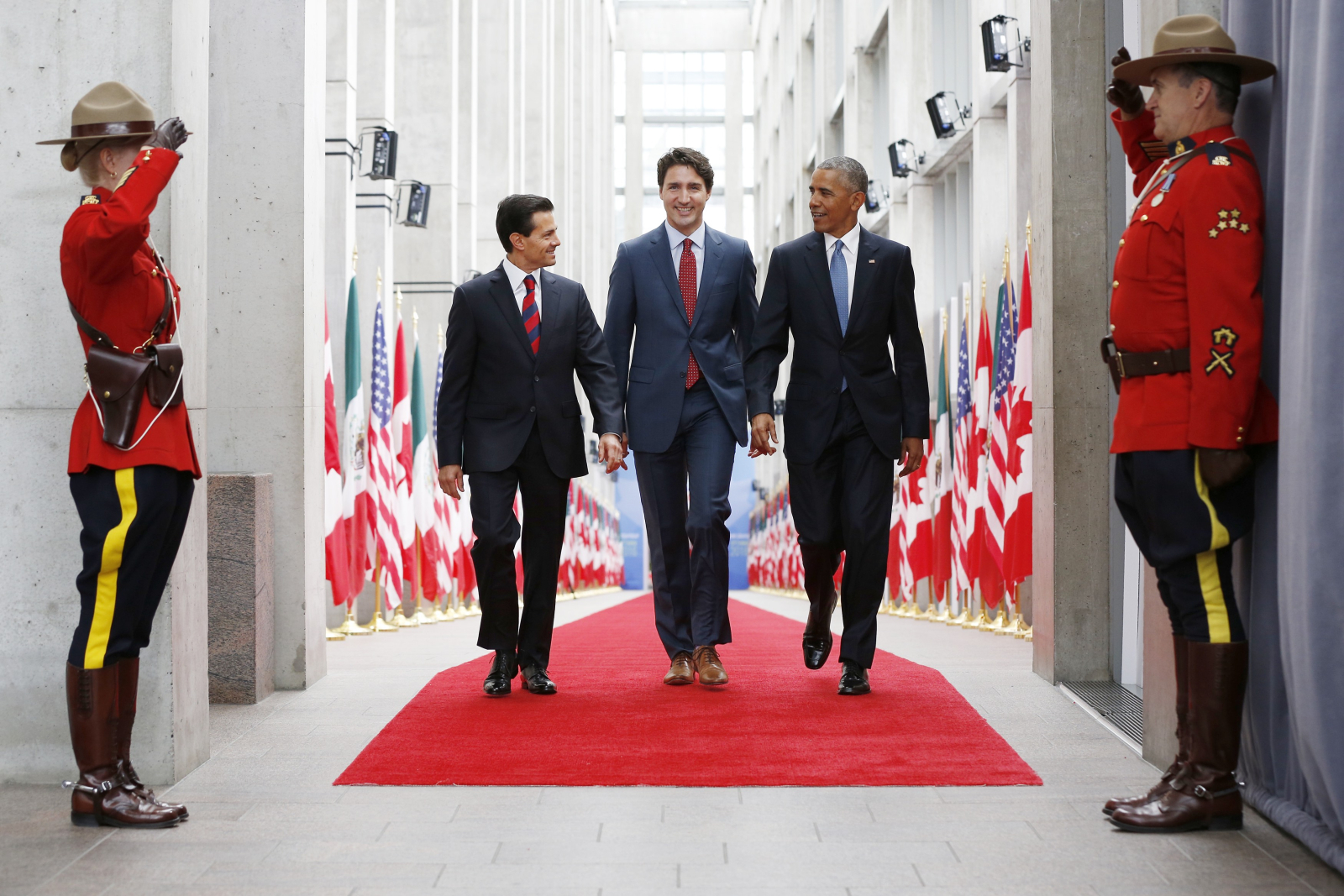 The three amigos have agreed to promote the end of the oil, gas and coal industries, agreeing to plan a "just transition to a clean energy economy."

This is among the highlights of a new agreement reached Wednesday between U.S. President Barack Obama, Canadian Prime Minister Justin Trudeau and Mexican President Enrique Peña Nieto as Canada hosted its first North American Leaders Summit in more than a decade.

Oil is not going to be cheap, Obama says

The deal opens the door to electrifying North America with clean power and Trudeau said the plan shows what happens when partners work together, instead of isolating themselves.

"How we work together, not just as two countries, but as three countries, on energy solutions that give opportunities to our citizens while protecting future generations from the impacts of climate change is something that we all we entirely agreed on," said Trudeau.

Obama also said that the deal foreshadows a major technological shift and a race toward the new economy.

“Oil is cheap right now. It’s not going to be cheap," Obama said at the end of the summit. "I’ve said this before. Those of you who are buying gas guzzlers. I’m telling you. (It won't be for long) because it is a finite resource and it becomes more expensive to extract and people are taking climate change more seriously. So we’re in a transition phase."

He said the United States, which is trying to implement his new Clean Power Plan, will also be looking to import hydroelectricity from across the border to help meet its energy needs.

“So there might be some wonderful hydroelectric power that we would like to get to the United States, the question is are there enough transmission facilities for us to be able to buy it at a competitive price,” he said.

“Just as we develop wind energy, we have to build an infrastructure to get wind produced in South Dakota, down to Chicago. Each of us has national plans, but the point is that by setting these goals, creating these coordinating mechanisms, we’re in a better position to take advantage of the confluence of interests and economies and opportunities.”

And instead of pipelines - a point of contention between Canada and the U.S. over the past decade due to projects such as TransCanada Corp's cancelled Keystone XL pipeline - the leaders agreed to collaborate on more cross-border electrical transmission lines that would allow Canadian provinces such as Quebec and Manitoba to export surplus renewable power down south.

"But in the meantime, technology is moving. And solar and wind and hydro and biomass and entire technologies we haven't even thought of yet," said Obama. "There’s some 15-year-old kid somewhere who’s figuring it out. I don't know whether he’s in Mexico, or Canada, or the United States, or China or Saudi Arabia, but somebody’s out there who’s going to figure this out. And I want that opportunity to accrue to our workers, our people, our communities and whoever wins this race, everybody else is going to follow.”

Obama and Trudeau also convinced Nieto to embrace their existing plans to tackle methane emissions from the oil and gas sector - an important source of global heat-trapping greenhouse gases - agreeing to a 40 to 45 per cent reduction by 2025.

The three leaders also committed to accelerating deployment of clean vehicles in government fleets while working with industry to encourage more choices for consumers.

The meeting, held at the National Gallery of Canada, created a buzz around Canada's Parliament buildings, bringing the area to a standstill, with heightened security that included major road closures and restricted airspace above the city.

"It's good to see Mounties around; it always makes me feel safe," Obama said after greeting Trudeau at the art gallery.

The climate change agreement was praised by various stakeholders from the clean energy industry as well as environmental groups.

“To build on today’s announcement a clear next step for Prime Minister Trudeau will be to work with provincial and territorial governments to develop a renewable electricity export strategy that capitalizes on Canada’s abundance of renewable energy resources," said Robert Hornung, president of the Canadian Wind Energy Association, in a statement.

Toronto-based Environmental Defence also said the deal would "help the continent show greater leadership in the global fight against climate change," but it added that it was disappointed the leaders' postponed an elimination of public subsidies for fossil fuels until 2025.

The leaders have also set a target of ensuring 50 per cent of their power generation will come from clean sources by 2025. Although Canada has already surpassed this target, with about 65 per cent of its electric power now coming from clean sources, Clare Demerse, a federal policy adviser with Clean Energy Canada, said there's still room for improvement.

“While we do have a head start over our neighbours, that doesn’t mean Canada can sit on the sidelines," Demerse said. "Clean energy will be at the heart of any successful effort to tackle climate change, on our continent and around the world. Any new clean power we bring online, or fossil-fuelled electricity we take offline, will help achieve the continental target and our own climate goals."