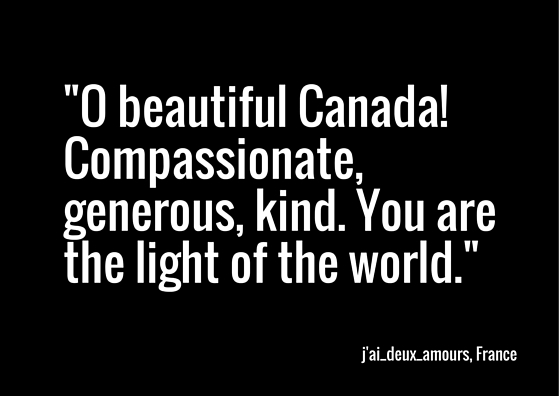 A lengthy feature story in the New York Times that takes an intimate look at what both private sponsors and refugee families go through, once the latter land in Canada, has inspired an avalanche of praise just in time for the country's 149th birthday.

A thousand people have commented on the piece, many of them praising both the efforts of those who put time and resources to help those in need, even if it’s one family at a time, and the bravery of those who venture into a foreign land with the hope of providing a better future for their children and themselves.

Prime Minister Justin Trudeau and his cabinet also received some love, especially from people who have seen their governments taking limited action to resettle some of the 21.3 million refugees in need of help across the world.

Even U.S. President Barack Obama was praising Canadians this week for opening their doors to refugees.

In his special address to the Canadian Parliament on Wedensday, President Obama said that Canada is inspiring the planet.

"The world has been inspired as Canadians across this country have opened up their hearts and their homes," Obama said. "And we've watched citizens knitting tuques to keep refugees warm in the winter. And we've seen your prime minister welcome new arrivals at the airport and extend the hand of friendship and say: 'You're safe at home now,'

"And we see the refugees who feel that they have a special duty to give back and seize the opportunity of a new life."

Obama also noted that one of those refugees who had arrived years earlier, later went on to do something very special in Canada.

"Like the girl who fled Afghanistan by donkey and camel and jet plane," Obama said, "and who remembers being greeted in this country by helping hands and the sound of robins singing. And today she (Democratic Institutions Minister Maryam Monsef) serves in this chamber and in the cabinet because Canada is her home."

Here are some of the most interesting reactions to the New York Times piece:

Can we please get over the

Can we please get over the fact that we got noticed in the New York Times?