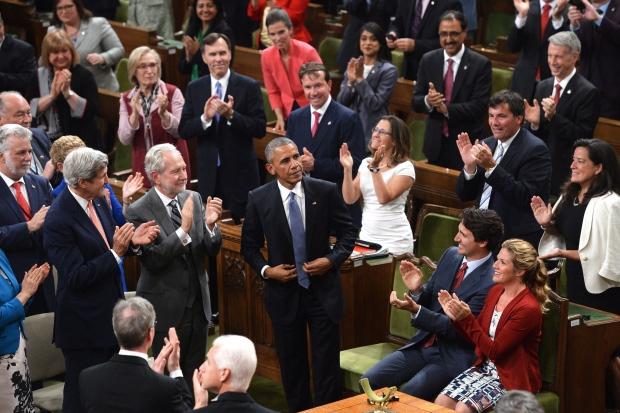 U.S. President gets a rapturous ovation from Canadian politicians after a special address to the House of Commons on June 29, 2016 in Ottawa. Photo by The Canadian Press..
Previous story
Next story

It's not every day that the crowd's reaction to a speech becomes a story — but that's what Canadian politicians might have achieved with their rapturous response to U.S. President Barack Obama.

There were different reactions to the tongue-in-cheek, campaign-style chorus of "Four more years!" repeatedly echoing from Canada's House of Commons after the president's speech to the chamber this week.

It came up at a White House briefing.

International newswires delivered news of the adoring response around the world, with stories or video of the moment posted on websites for The Washington Post, Fox News, the major U.S. TV networks, and in more distant places like the U.K.'s Daily Telegraph.

Some commentators viewed it as a moment of triumph for a president who's now begun a global farewell tour, with his popularity still high abroad and on the upswing at home to the point that he's been invited to participate in the campaign for a third straight Democratic term.

Some, however, found it weird.

"I love Canada. Have a home there. Wonderful country. This is embarrassing," tweeted Stuart Stevens, who was a senior Republican strategist in the last election.

"It's Parliament not a group of 14-year-old girls having a private Justin Bieber concert."

The response to Obama was so exuberant that Canadian MPs actually delivered a standing ovation while Obama was asking for more money from Canada — to meet its unreached military spending targets at NATO. He cleverly stuck the request into a section filled with natural applause lines, about the world needing more Canada and the quality of the northern neighbour's soldiers.

A transcript of the speech counted about four-dozen applause breaks.

Some Americans joked about the possibility of Obama moving north, to extend his political career. He's constitutionally precluded from seeking a third term in his own country by the 22nd Amendment of 1951.

But Canada allows foreign-born citizens to run for high office.

Yet it appears Obama has no interest in becoming the second Canadian in his family. He referred in the speech to his brother-in-law from Burlington, Ont.: "I give Burlington a shout-out," he said.

Southern Ontario MPs can rest easy. He won't be moving to their region, and challenging them for their seats.

"I'm not aware of any plans that the president has to run for Prime Minister of Canada," Earnest said.

"As lovely as Ottawa was yesterday, I think the president would prefer a warmer climate."

"This is not a conspiracy. It's happening."