Why is this green neighbourhood near Parliament dividing First Nations? 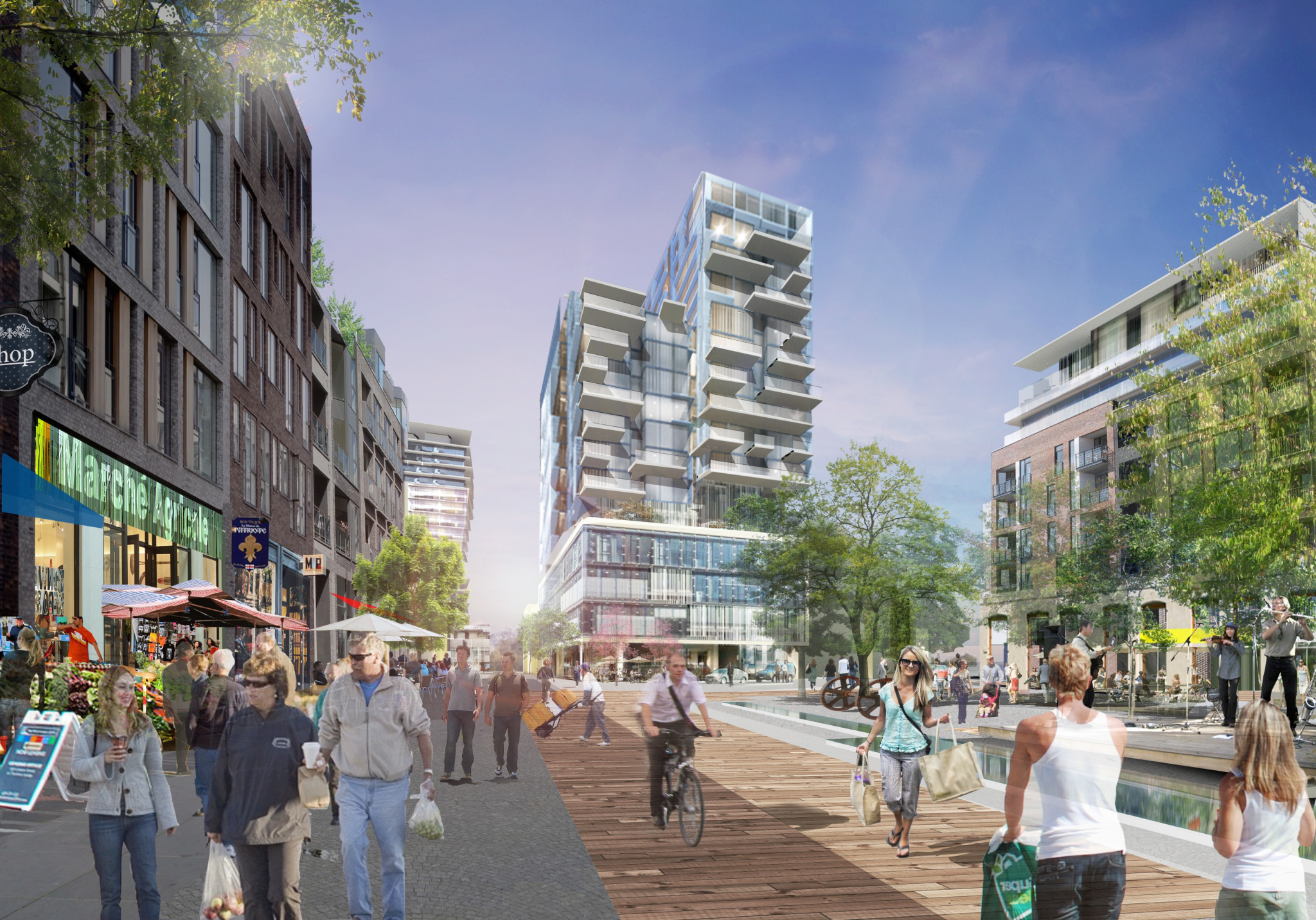 An artist's illustration of a neighbourhood in the proposed Zibi development project in Ottawa. Image courtesy of Windmill Development Group.
Previous story
Next story

Algonquin First Nations are badly divided over a world-class eco-development underway on the shores of the Ottawa River.

Named Zibi after the Algonquin word for river, the project has already begun clearing an old industrial site two kilometres west of Parliament Hill to make way for a zero-waste, zero-carbon community featuring plazas, parks, pedestrian paths and bike lanes on the waterfront.

The Pikwakanagan First Nation and the Algonquins of Ontario - the federally and provincially recognized holders of the land - support the project. But many Algonquin people on both sides of the Ottawa River, including some chiefs, are bitterly opposed.

Douglas Cardinal, a renowned Métis architect who designed the Canadian Museum of History, has emerged as a prominent anti-Zibi activist. “The development is on the wrong side of history… And it ain’t going to be built,” said Cardinal.

Cardinal isn’t alone in his wish for the Zibi redevelopment to be stopped. Nine Algonquin chiefs and the Assembly of First Nations formally oppose the project and are calling for the federal government to step in. The opponents maintain that the land is both sacred and unceded.

In Parliament, the federal New Democrats have challenged the Trudeau government, suggesting that if it intends to honour the recently adopted United Nations Declaration for the Rights of Indigenous People, it should return the unceded territory to the Algonquin people.

“Our hope is that the parties involved, including the Windmill Development Group, local municipalities, the Algonquins of Quebec, and the Algonquins of Ontario can work together to find a constructive, respectful, and positive way forward,” Bennett said in the House of Commons on June 17, in response to a question from NDP MP Roméo Saganash.

Zibi would be Canada's first One Planet Community

The new neighbourhood would be part of a massive $1.2-billion makeover that includes a pair of islands and a wedge of Gatineau waterfront property on 37 acres of contaminated land. A separate $150-million project by Hydro Ottawa is also underway to bury hydroelectric turbines below ground, opening up new views of the area’s Chaudière Falls on the Ottawa River for the first time in more than a century.

When complete, the development would qualify as Canada’s first “One Planet Community” -- a rare stamp of approval so far given to just 10 sustainable neighbourhoods around the world.

Ottawa-based Windmill Development Group bought the land from Domtar in a private sale and is proceeding with the project in partnership with Dream Unlimited Corp.

Jeff Westeinde, executive chairman of Windmill, noted that the entire Ottawa Valley is unceded Algonquin territory for every property, including the Parliament buildings, the prime minister's residence and everything else. But he said the company wants to demonstrate how the private sector can play its part in Canada’s reconciliation with Indigenous people.

“We’ve been told we are the first private sector company to reach out this actively to the Algonquins when development happens on their territory,” said Westeinde.

Cardinal was initially on board with Hydro Ottawa’s plan. He was commissioned to design viewing areas and public spaces commemorating Algonquin culture that are part of the utility company’s development. But he said he walked away after he saw where the project was headed.

Cardinal added that he doesn’t want to see “ugly concrete” taking over the Chaudière and Albert Islands - land that he and the Algonquin people see as sacred.

For 10,000 years, Cardinal said the falls were a “cathedral in nature” and the islands were a spiritual meeting centre. And while a ring dam currently surrounds the falls, he compared its importance to holy sites like Mecca or St. Peter’s Square.

“It’s the heart of the Algonquin people,” he said.

The First Nations people that oppose Zibi share a vision for the islands to become public parkland and for nearby Victoria Island – a third island adjacent to Chaudière – to become home to a national Indigenous centre. That vision was first held by late Algonquin elder William Commanda and was once endorsed by the National Capital Commission (NCC) - the federal Crown corporation that coordinates urban planning in the region.

But Windmill has also teamed up with Decontie Construction, a general contracting company from the Kitigan Zibi reserve. Wanda Thusky, a partner of Decontie, sees Zibi as an opportunity for Indigenous workers to get crucial off-reserve experience.

“For our Anishinaabe workers trying to advance themselves, it could mean the world for them to become certified journeyman, to become self sufficient,” said Thusky. “Currently, there is nothing close to this type of partnership being brought forward to our nation.”

“If you lived our lives, if you understood our social and economic conditions, perhaps there would be a better understanding of our position,” she said.

Windmill has unanimous approval from the City of Ottawa, Ville de Gatineau and the NCC for the redevelopment. It has begun a two-year $125-million remediation process. Demolition is underway and condos are being sold. Westeinde said construction will start before the end of the year.

That hasn’t stopped Cardinal from bringing this battle to court. In May, a Divisional Court judge turned down his request to appeal two decisions by the Ontario Municipal Board that allowed Windmill to begin construction. He now plans to ask the full panel of the Divisional Court to review this decision. In the meantime, Windmill continues its work on Zibi.

All parties agree Chaudière and Albert Islands need to be revitalized, they just can’t agree on how it should be done and who should do it.

“The idea has always been that when industry is over, and when the islands ceased to be exploited, that the falls and islands would be returned to a public space that the Algonquins would have,” Cardinal said.

Westeinde said there’s room for currently opposing Algonquin people to have their say on what they’d like to see on their land.

“It’s a 15-year long project. There is lots of time to address issues. But in order to do that, they would have to engage with us, which has not been the case,” said Westeinde.

Cardinal said he believes the Algonquin should be negotiating with a representative of the Crown and not a private developer. However, he said he hopes in the meantime that media coverage would raise public awareness to help opponents deliver their message.