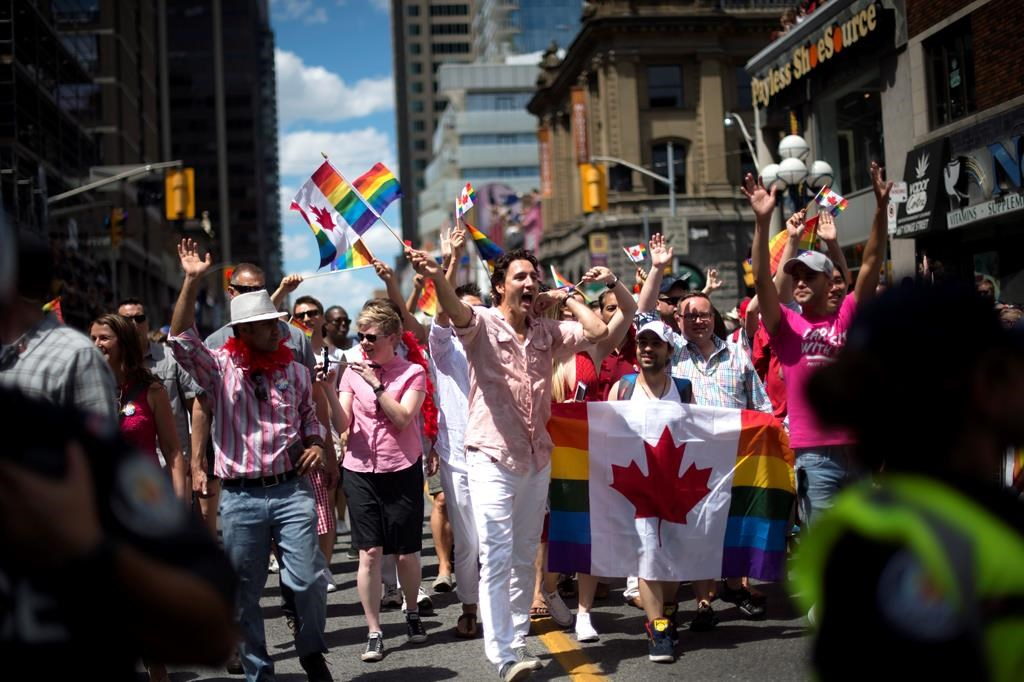 Canada’s largest Pride parade marked another milestone Sunday as a sitting prime minister marched for the first time in a colourful celebration that was tempered by last month’s shooting massacre in Orlando, Fla.

A river of multi−coloured floats and marchers came to a halt on Yonge Street and stood in silence along with the masses of onlookers to remember the shooting’s 49 victims, predominantly LGBTQ.

Trudeau said the Florida tragedy is a reminder that "we can’t let hate go by."

"We have to speak up anytime there is intolerance or discrimination," he said as the 36th annual parade kicked off.

Prominent in the procession was a pair of marchers who held a large black banner that read "Orlando" and "We march for those who can’t."

A group of several marchers, dressed in pastel−coloured robes, each carried signs with the name and age of an Orlando victim as they worked their way down the route.

"The good part of it is that so many people came together," said Aydian Dowling, the parade’s international grand marshal, of this year’s parade in the wake of the horrors in Orlando.

Trudeau drew a boisterous reaction from those who lined the parade route — he has taken part in the parade before, including last summer, but this was his first as prime minister.

Members of the crowd, some decked out in rainbow gear and outlandish costumes, posed for selfies with the prime minister while others chanted his name as he passed by.

Tory said the Orlando mass shootings showed that "we’ve got things to do" to promote tolerance and inclusion for the LGBTQ community.

Before the festivities, Trudeau attended an outdoor church service in the heart of the city’s gay village where he sang along to Lady Gaga’s "Born This Way."

He also told local news station CP24 that the federal government is exploring the possibility of gender−neutral identification. Ontario announced last week that it would allow the use of a third gender indicator, X, for driver’s licences and health cards.

"It’s something we’re looking at federally, we’re just trying to figure out the best way to get around to doing it," he said.

Trudeau also downplayed his appearance at the parade as no big deal, noting he’d been attending Pride parades for years.

"It shouldn’t be a big thing that a prime minister’s walking a Pride parade, and from now on it won’t," he said.

The parade wraps up a month of Pride festivities in Toronto, which saw entertainment heavyweights like George Takei and Lindsay Lohan participate.

The Orlando shooting resulted in tighter security at the parade. Police officers, many wearing uniforms with the Pride rainbow on them, were visible even along streets adjacent to the parade route.

Many of the officers seemed to be enjoying the experience, posing for pictures and tweeting them.

The parade briefly stalled when activists from the Black Lives Matter movement staged a sit−in on the parade route and set off rainbow−coloured smoke bombs. But after talking to Pride officials, the sit−in ended peacefully and the parade continued.

The group said, among other things, it demanded and won a ban on police floats at the parade and a commitment from Pride to hire more "black trans women, black queer people, indigenous folk and others from vulnerable communities."

Mike McCormack, head of the Toronto police union, was critical of the police float ban.

"Shame on Pride organizers," he tweeted on Sunday night.