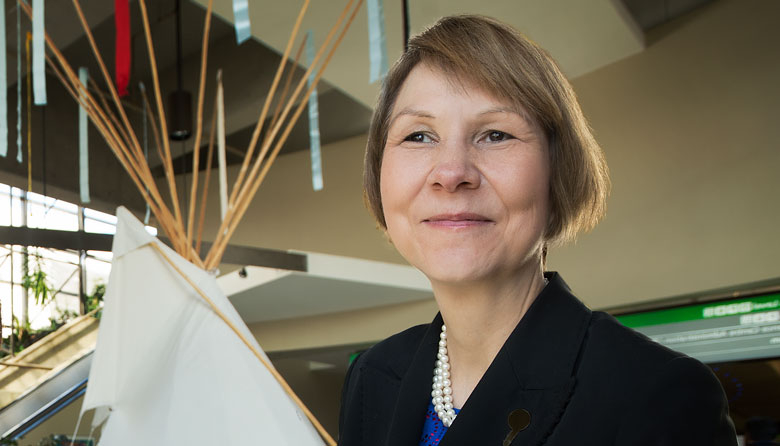 Cindy Blackstock says the government’s response since the January ruling has been inadequate and that makes her wonder about the inquiry as well. Photo by Richard Siemens from University of Alberta website.
Previous story
Next story

A leading advocate for the welfare of First Nations children and families says she’ll have little faith in the upcoming inquiry on murdered and missing indigenous women unless a funding gap is closed first.

The Indigenous Affairs Department is required to update the Canadian Human Rights Tribunal by Wednesday on how it funds child welfare services in the wake of the tribunal’s landmark decision that the existing system was discriminatory.

In some cases, it said government involvement has meant some children have been unfairly denied benefits.

Cindy Blackstock, the executive director of the First Nations Child and Family Caring Society, says the government’s response since the January ruling has been inadequate and that makes her wonder about the inquiry as well.

"Right now, I have concerns about what they are going to do because they can use official procedure for a guise for taking action and that’s an injustice to all the murdered and missing indigenous women," she said.

Blackstock’s organization was one of two that brought the child welfare complaint to the tribunal.

She said the funding need for child welfare is more than $200 million this year alone, providing a breakdown of her calculations to The Canadian Press that are based on available data — numbers she said the government received months ago and has never challenged her on.

"They are under a legally binding order," she said.

"They need to really get serious about compliance ... because this idea that they can really act as if they are above the law, and even worse that children are below the law, that needs to stop."

Indigenous Affairs Minister Carolyn Bennett was not available for an interview to respond to Blackstock but her office issued a statement that made no mention of the tribunal’s compliance orders.

Instead, it flagged "historic investments" announced on child welfare, along with housing and education, in the last budget.

The federal budget commitment to child welfare was $71 million.

Advance consultations on the scope of the inquiry into missing and murdered indigenous women saw child welfare raised as one of the key issues the inquiry should review.

Details on the inquiry will be released in the coming weeks, Bennett’s office noted.

"The federal government is working with the provinces and territories to answer any questions and address comments," the statement said.

"We are determined to do this right for the survivors, families and loved ones, to honour the spirits and memories of those we have lost, and to protect future generations."

Last week, The Canadian Press reported some provincial and territorial governments had questions and concerns about their roles and responsibilities in the national inquiry, including who was going to cover the cost of travel and other support for families and whether legal representation would be required.

As the feds look to announce the study’s mandate, they should not be surprised about mistrust that exists due to a history of systemic discrimination, said NDP indigenous affairs critic Charlie Angus.

"We’ve had inquiries, we’ve had coroner’s reports, we’ve had commissions of study," the northern Ontario MP said. "Yet, the federal government continues to carry on, carry on."