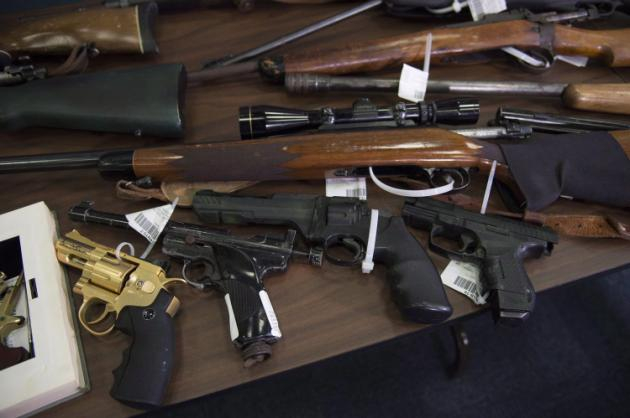 Five police officers were killed in a Dallas mass-shooting Thursday night, blocks away from where President John F. Kennedy was assassinated 53 years ago.

Twelve police officers and two civilians were shot during the attack that saw one sniper — who targeted white police — open fire on officers working a peaceful protest in response to police shootings in Minnesota and Louisiana.

In Dallas, the shooter, 25-year-old Micah Johnson, was trained in the military and served a tour in Afghanistan. He was killed in a standoff with police after a remote-controlled “robot bomb” was detonated by law enforcement.

The tragedy is just the latest example of the diametrically-opposed gun cultures that divide two of the world's closest and friendliest allies.

The numbers are staggering. There are up to 51 times more annual gun-related deaths in the U.S. versus those in Canada, according to the most recent Canadian data.

There have been 7,089 gun-related deaths in the U.S. since the start of 2016, according to the Gun Violence Archive. Over 300 of the victims were children, 947 involved a police officer shooting/killing a perpetrator, and 179 were mass shooting incidents.

These numbers include the five deaths in the July 7 Dallas shooting, along with 12 other gun-related deaths across the country that day.

That’s substantially more than in Canada, where 172 firearms-related deaths were recorded by Statistics Canada in 2012. The federal statistics agency hasn’t provided more recent numbers, but its data revealed the 51-fold difference between the U.S. and Canada in that year.

The Canadian Criminal Code splits firearms into three categories — prohibited, restricted, and non-restricted. Prohibited firearms include military-grade assault weapons like AK-47s and sawed-off rifles or shotguns. Handguns are generally classified as restricted weapons, while rifles and shotguns are usually non-restricted.

The AR-15 rifle used in other high-profile mass shootings in the U.S., including last month’s massacre at a gay nightclub in Orlando that saw 50 people killed, are classified as restricted in Canada.

No background checks required in many states

But you can buy them without a background check at gun shows or from neighbours in many American states. Background checks through the FBI’s database are only required for in-store purchases. Customers are asked if they’ve ever been committed to a mental institution and their criminal history before the store calls the FBI. Denials are rare, amounting to less than 1 per cent.

Following the shooting in Dallas, U.S. President Barack Obama said that “when people are armed with powerful weapons, unfortunately it makes attacks like these more deadly and more tragic.”

Canadians are shocked by the cowardly attacks against police in Dallas. Our solidarity is with all victims of violence on this tragic week.

Tensions have been boiling over in the U.S. between Black Lives Matter demonstrators and police in recent years following a series of high-profile incidences of police killings of African Americans. Dallas Police Chief David O. Brown said Johnson was upset about recent police shootings, “upset at Black Lives Matter,” and at white people.

The Congressional Black Caucus said that “if we fail to act, this will be a long hot summer.”

Prime Minister Justin Trudeau tweeted early Friday morning that “Canadians are shocked by the cowardly attacks against police in Dallas. Our solidarity is with all victims of violence on this tragic week.”

Although former prime minister Stephen Harper’s government scrapped the federal Long Gun Registry in 2012, regulations to purchase firearms are still much stricter in Canada. You have to have a firearms license — which is only given after you’re trained on how to safely handle firearms, and must consent to criminal record and background checks before being given a license.

“There are more points at which someone who shouldn’t have a gun is stopped from getting a gun,” associate professor of sociology at the University of Toronto Jooyoung Lee said.

Lee, whose research covers gun violence in urban American centres, said that Canada has a more robust set of policies that make gun violence much less likely than in the U.S.

Canada “creates an infrastructure that somewhat levels the playing field, trying to address poverty — the underlying driver of gun violence in communities," he said. “Canada has a more robust healthcare system, there’s more money being funneled into public education, there’s a much more progressive approach to ensuring that gun violence doesn’t happen here.”

Not so in the United States where there is around one firearm in circulation for every citizen and the National Rifle Association spends millions lobbying government to keep gun regulations loose.

Here’s how much money the NRA spends on lobbying and political campaigns.

In the wake of Wednesday’s shooting in San Bernadino, Calif., the world, especially those on social media, was once again engulfed in the gun control debate.

One point of controversy focused on the many people on Twitter, especially politicians, who sent out prayers to the victims. Some, particularly those within the political left, expressed that praying over shootings wasn’t enough, especially in the absence of meaningful legislation designed to address the problem of gun violence. This sentiment was illustrated vividly in the cover of Wednesday’s New York Daily News, which proclaimed boldly that “God Isn’t Fixing This.”

According to Fortune Magazine Igor Volsky, a contributing editor at Think Progress — an independent editorial site sponsored by The Center for American Progress Action Fund, a progressive think tank — took a look at all the politicians tweeting out their prayers after the San Bernadino shooting and calculated how much the NRA had donated to each.

Volsky found that in 2012 the NRA spent $19.7 million on candidates who tweeted “thoughts and prayers” for San Bernadino victims, but did not call for changes to gun control laws.

And, according to OpenSecrets, the NRA spent $28,212,718 plus on political contributions in 2013 and 2014 to advertise their agenda and create propaganda that equates the right to buy every form of gun with freedom.

Texas legally allows its residents to openly carry “long guns” like rifles and shotguns without a permit. Only six states and the District of Columbia restrict the open carry of long guns, and only six restrict that of handguns, including Texas.

Police circulated a photo of a man named Mark Hughes following Thursday’s shooting in Dallas. Hughes attended the protest with one of these “long guns” on his shoulder. He turned himself in after his photo circulated around the world, and was later released.

Canadian gun violence on the rise?

As of May 2016, gun-related deaths increased by 200 per cent between January and April compared to the previous year’s numbers in Canada. There were 18 homicides involving firearms, 12 more than January-April 2015.

Greg McLane, who is with Toronto Police’s homicide squad, said at a press conference in May that “it’s hard to say whether there are more guns out there, but I’m of the belief that more people are carrying their guns.”

But according to a Toronto Star report from April, shooting deaths in Toronto peaked in 2005 when 52 people were murdered in gun-related incidents. The numbers have “steadily decreased” since then, with 42 shooting deaths in 2007 and 34 in 2012.

Lee said that while the rise in gun-related deaths should “cause politicians and community members to pause and think what might be happening in hot spots,” Toronto is still one of the safest cities in North America and that it does a good job of addressing gun violence.

“I’m always a little cautious about interpreting year-to-date statistics because the only thing they really show you is how rates of violence compare at this particular moment compared to last year,” Lee said. “There’s quite a bit of variance in between different years when it comes to things like shootings.”

Trudeau’s Liberals did promise during the election to tighten up gun laws that were eased under former Prime Minister Stephen Harper. The proposed measures include enhanced background checks for anyone seeking to buy a handgun or other restricted firearms and toughen up border security to prevent the illegal import of weapons from the U.S.

Lee added that, given current gun control legislation in Canada, it’s hard to see how the “Canadian context could mimic the American context” regarding gun violence.

“There are so many systemic problems in the U.S. when it comes to addressing concentrated poverty and racism at the institutional level that Canada doesn’t have to the same degree,” Lee said.

But there is a push by some Canadians to lift restrictions on certain firearms. Over 25,000 people signed a petition to allow Canadians to purchase AR-15s, a notion Canadian politicians like Thomas Mulcair and Public Safety Minister Ralph Goodale have dismissed.

With files from Fram Dinshaw