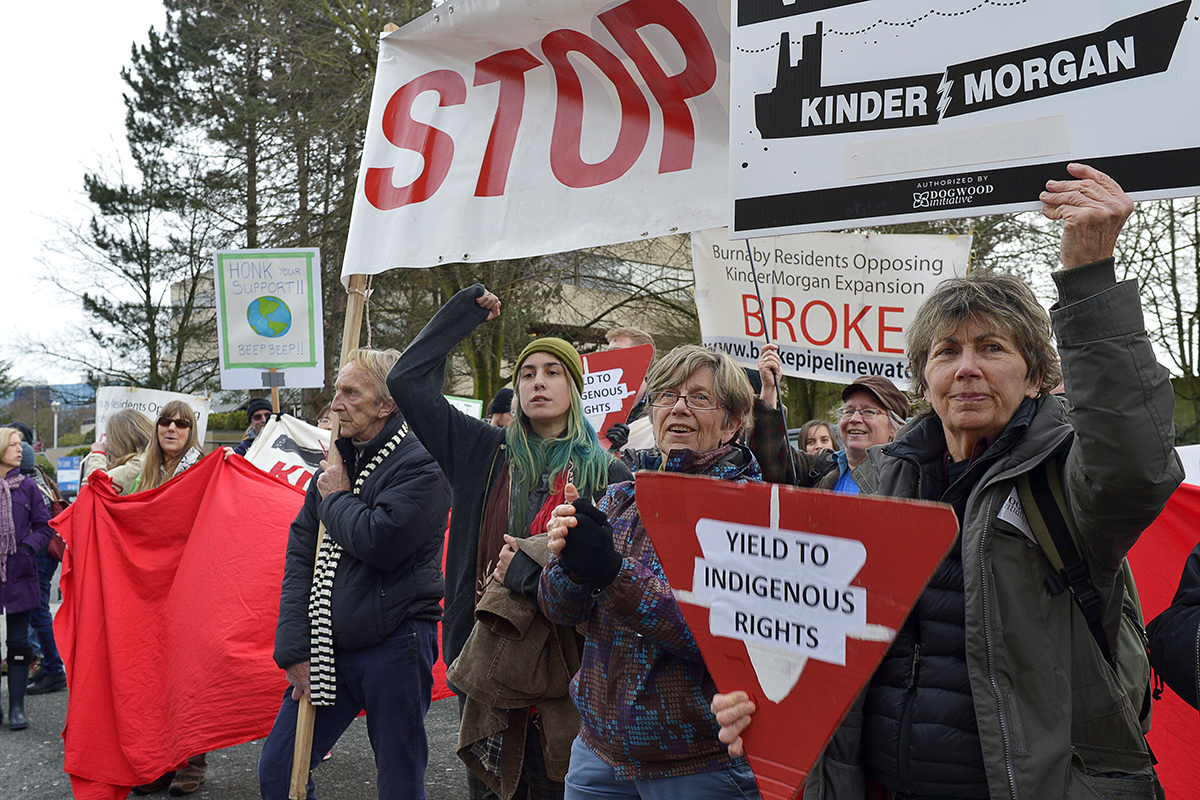 Protesters marched right to the doors of the Delta Burnaby Hotel and Conference Centre, where the NEB Trans Mountain hearing took place on January 19, 2016. File photo by Elizabeth McSheffrey.
Previous story
Next story

In a statement released on Friday, the Association of Professional Engineers and Geoscientists of Alberta said “there was insufficient evidence of either unskilled practice or unprofessional conduct by the APEGA Members; therefore, the investigations were closed” following a “thorough investigation” of former or current employees at the regulator, Canada’s National Energy Board (NEB).

The findings may provide some comfort for the NEB, which has been struggling to regain public trust after criticism from whistleblowers, First Nations and environmental groups which accuse it of being too cozy with the industry it regulates. The NEB is also now under review by the newly-elected Liberal government, which has promised to "modernize" the regulator to help regain public confidence in federal oversight of the oil and gas industry.

The engineering association had confirmed to the media in 2015 that it was investigating more than one NEB employee following allegations raised by two whistleblowers who believed they were treated inappropriately and alleged that the NEB engineers did not adequately pursue matters of public safety.

The association said it examined whether the engineers met their professional duty to protect the public while investigating specific pipeline-safety infractions and found that the engineers had done nothing wrong.

“APEGA does not typically discuss the details of investigations. However, as we had publicly stated that we were commencing investigations, we felt it was appropriate to disclose the results in this particular case,” said Registrar Carol Moen, P.Eng.

The National Energy Board’s chief engineer, Iain Colquhoun, said he had complete confidence in the APEGA process from the beginning.

“Their investigation was very thorough,” Colquhoun said in an email. “APEGA has correctly concluded that none of the documents submitted by the complainants suggest any wrong-doing by the members under investigation, and the investigation is terminated.”

“I’ve been an engineer for 52 years and worked in many countries. I have always conducted myself in a way that upholds the standards and reputation of the engineering profession. In particular, I have held and will continue in my area of practice to hold paramount the health, safety and welfare of the public, and have the highest regard for the protection of our environment.”

One of the NEB's other top engineers, Joe Paviglianiti agreed that the investigation was very thorough, repeating the same comments in a separate email sent to National Observer.

"I have over 35 years of oil and gas experience with 23 years as an engineer," Paviglianiti wrote. "I have always conducted myself in a way that upholds the standards and reputation of the engineering profession. In particular, I have held and will continue in my area of practice to hold paramount the health, safety and welfare of the public, and have the highest regard for the protection of our environment."

Evan Vokes, a former engineer from energy company TransCanada Corp, who lost his job in 2012 after reporting various pipeline safety infractions to the NEB, was one of two complainants in the case who alleged that the Calgary-based NEB had found pipeline safety violations but was not adequately enforcing the rules.

He told National Observer that he was disappointed with the conclusions of the investigation and was planning to appeal.