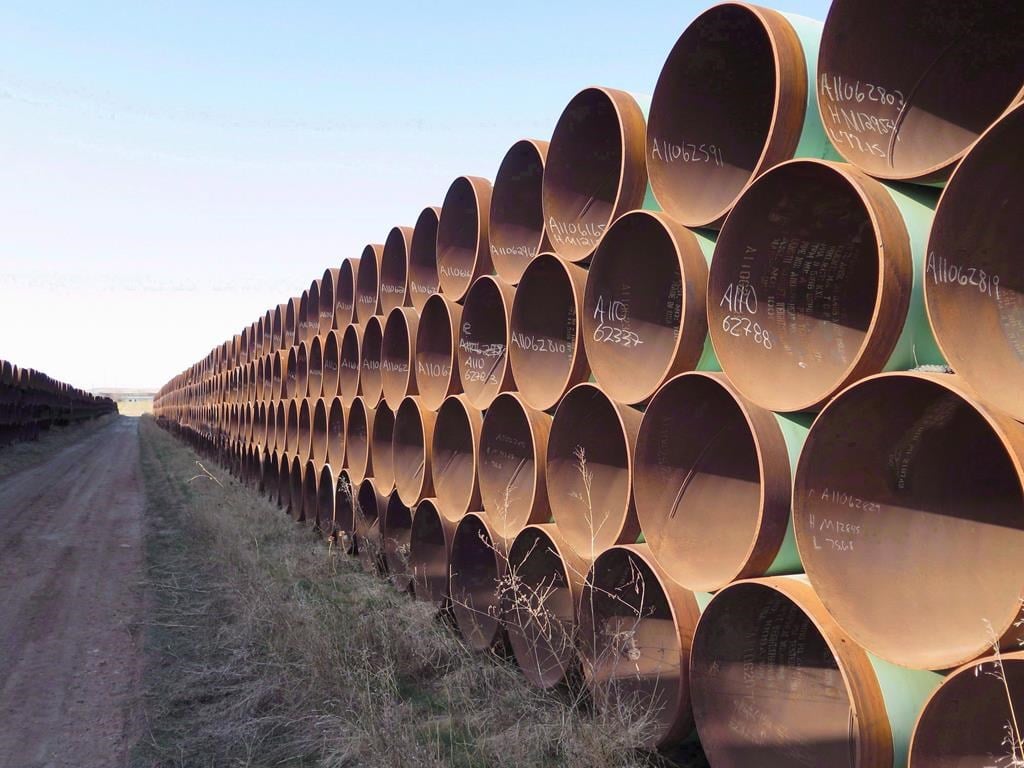 The Keystone XL pipeline project was shelved last fall when President Barack Obama decided not to support it. File photo by The Canadian Press.
Previous story
Next story

Reviving the Keystone XL pipeline project from Canada has become an official policy of the Republican party in the 2016 election, with its inclusion in the platform that's just been approved at the national convention.

The ill-fated oil pipeline is the only detailed reference to Canada in the 66-page document adopted by delegates to the convention in Cleveland which meets through Thursday.

"Our Canadian neighbors can count on our co-operation and respect," the platform says.

"To advance North America's energy independence, we intend to reverse the current administration's blocking of the Keystone XL Pipeline. Apart from its economic value, that project has become a symbol in the contest between the public's desire for economic development and the government's hostility to growth. We stand with the people."

The document accuses the Obama administration of killing the project for purely political motives, saying it simply did so to satisfy environmentalists who support the Democratic party.

The decision last fall to refuse a cross-border permit ended years of suspense over the project, which if completed would have carried just under one-quarter of the oil Canada exports daily to U.S. refineries and would also have carried some American oil.

It's hardly surprising to see it referenced in the platform: support for Keystone XL had been longstanding Republican policy and was in the 2012 platform. It's also supported by presumptive presidential nominee Donald Trump.

It's also worth noting that a party platform plays a different role here than in Canada. In Canada, it's viewed as a to-do list that governments are expected to try completing if they have a parliamentary majority. In the U.S., individual parties rarely have such power to force through their whole legislative agenda — so a platform is considered more of a guide than a list of boxes to tick.

A decision to approve Keystone would ultimately rest with the president.

Trump has been supportive, although he's sent mixed messages about whether he'd approve it or insist on better terms from Calgary-based TransCanada Corp. The company had already agreed to include some American oil — less than 10 per cent of its contents.

TransCanada has taken legal action against the U.S. government. It filed for NAFTA arbitration last month, and is seeking $15 billion in damages. Like the GOP, it claims the rejection was arbitrary and politically driven.

When President Barack Obama announced his policy last fall, he did declare a political purpose to his decision: the desire to set an example before the Paris climate summit about the need to sacrifice some fossil-fuel projects.

But his critics pointed out that his own administration had concluded killing Keystone wouldn't help the climate. Studies found that the only way rejection might make a difference is if it coincided with a long and painful slump in oil prices and if no other pipelines got built out of Canada.

Environmentalists point out that those bad-case scenarios for the oilsands are currently unfolding, so rejecting Keystone will, in fact, make a significant difference in carbon emissions.

"The United States imports over seven million barrels of foreign oil a day and will do so for decades. We think that oil should come from Canada and American shale deposits rather than from Venezuela and Saudi Arabia — countries that do not share American values."

As for the rest of the GOP platform, it didn't include any reference to Trump's promise to undo the NAFTA trade agreement with Canada and Mexico, nor did it mention his opposition to the Trans-Pacific Partnership. It simply referred to a need for better trade deals.

It also mentioned Canada in passing, in a section on religious freedom.

The platform called for the next president to advocate more forcefully for religious liberty abroad at a time when, it said, China is destroying churches; Europeans are being jailed for home-schooling kids; "and even Canada threatens pastors for their preaching" — which may have been a reference to human-rights complaints against religious figures for actions deemed anti-gay.

Republicans go ballistic for reasons they make up