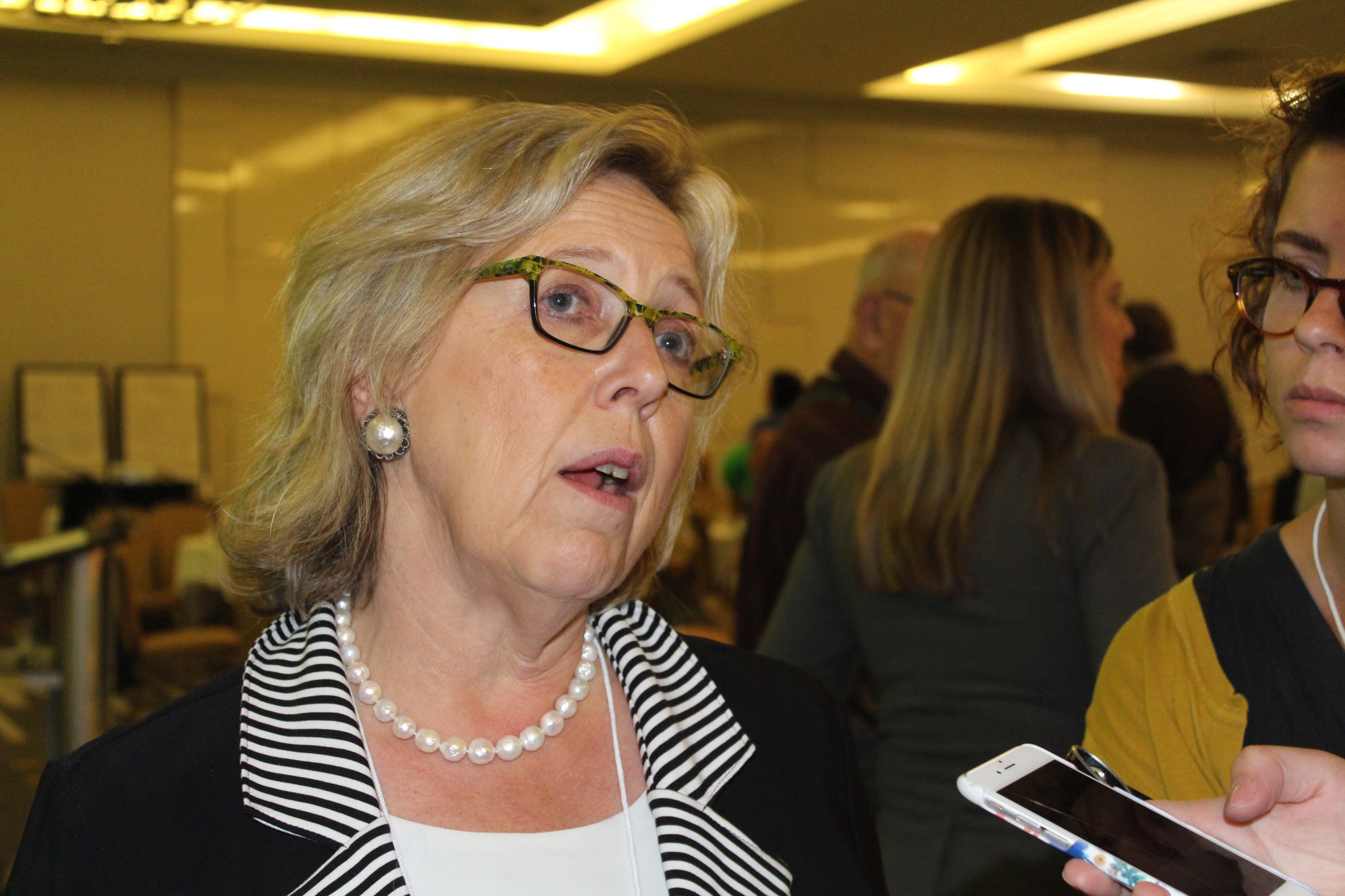 Green Leader Elizabeth May speaks to reporters at a party convention in Ottawa on July 7, 2016. Photo by Mike De Souza.
Previous story
Next story

Federal hearings reviewing the cross country Energy East pipeline proposal got off to a rocky start on Monday as controversy flared over a private meeting between federal regulators and former Quebec premier Jean Charest.

At the centre of the storm is an inappropriate invitation by the National Energy Board (NEB) for the meeting with Charest, who, at that time, was on the payroll of the company promoting the pipeline, Calgary-based TransCanada Corp.

The details emerged through a series of emails and notes, obtained by National Observer through federal access to information legislation, about the NEB's private meetings in Montreal with Charest, business leaders and mayors to discuss the Energy East project.

Gauthier and fellow NEB member Lyne Mercier, who was also at the meeting, are part of the three-member federal panel that is reviewing the proposed Energy East project, considered to be the largest ever pipeline proposed in Canada.

The Calgary-based NEB is a Federal Court with a mandate to conduct all of its reviews in public without showing any bias. But the stunning revelations about the private discussions have prompted critical coverage in the Quebec media about whether the NEB is engaging in a "tainted" review process about the proposed 4,500-kilometre pipeline that, if approved, would ship more than one million barrels of oil per day between Alberta and New Brunswick.

Green Leader Elizabeth May said that Gauthier should step aside since his invitation has created an appearance of bias in a review process that is supposed to be conducted in public.

“I’m quite shocked and it does take a lot for me to lower my opinion of the NEB enough to be shocked," said Green Leader Elizabeth May in an interview with National Observer at a weekend Green Party convention in Ottawa.

“If (Gauthier) wanted to do something that would eliminate the conflict of interest, (stepping down from the hearings) is what he should do… and relieve the appearance of bias."

The NEB has maintained that it didn't know Charest was working for TransCanada at the time of the meetings in Montreal in January 2015.

The NEB also said in July that it didn't discuss the Energy East project with Charest during the meetings, but later apologized in August for providing false and misleading information after the records released through access to information legislation revealed that the pipeline project was actually on the agenda.

May said the five NEB representatives who participated in the meeting - President and CEO Peter Watson, Board members Gauthier and Mercier and two employees – should have known better than to engage in private discussions about a pipeline that was under a formal review.

“If a quasi-judicial decision maker has, early in the process, displayed a bias that colours the rest of the process, then you’re just putting good money after bad,” May said. “There’s no public confidence in that process.”

Details about the Charest meeting has provoked an onslaught of criticism that the hearings have been rigged.

"A tainted process?" read a headline in a Monday morning column by La Presse's Vincent Marissal.

"One thing is clear, the National Energy Board (NEB), the organization in charge of leading consultations and to make recommendations to the Trudeau government at the end of the process, is suffering, on the first day of the hearings, from a blatant credibility gap," Marissal wrote.

He also noted that even if the NEB was not aware of Charest's contract, that the former premier should have known better. Charest, as a federal cabinet minister in the 1980s, was once forced to resign after calling a judge regarding a case related to doping in Canadian track and field.

"All of this is casting doubt on the integrity of the consultation process that is starting this morning in New Brunswick," Marissal wrote.

Federal New Democrats have also asked Canada's lobbying commissioner to review the matter and May said she agreed that there should be an inquiry into the NEB's meeting with Charest - part of a two-day NEB trip to Montreal in January 2015 for a series of private discussions with the former Quebec premier, business leaders and local mayors.

Charest, who works as a lawyer out of the Montreal offices of the McCarthy Tétrault law firm where the meeting took place, has not responded to requests for comment. The former premier, who left politics in 2012, was not registered as a lobbyist and has denied doing any lobbying on behalf of TransCanada.

TransCanada says it wants to work with stakeholders to improve project

TransCanada has said it is dedicated to showing transparency and working with stakeholders and government officials to improve its project and ensure it is safe.

The Energy East project has wide backing from the oil and gas companies, which believe it would hold the key to boosting the fortunes of an industry that has been hammered in recent years by slumping global commodity prices.

Environmental groups, First Nations leaders and some mayors are fiercely opposed to the TransCanada proposal because of the threat of a spill and concerns that it could push Canada's national climate change targets out of reach.

Daniel Green, the deputy leader of the federal Green Party, who is registered as one of more than 300 intervenors at the hearings, said he was also skeptical about the fairness of the process.

Green said that TransCanada wants to run Energy East for hundreds of kilometres through Quebec, alongside Hydro-Québec's right-of-way for transmission lines, because it is cheaper than if the Calgary-based energy company had to choose another route that would require purchasing private land.

But he said there are important issues that need to be adequately examined, including the safety of having pipelines running nearby electric transmission lines and whether this could compromise the capacity of utility companies to expand their own networks.

Electric lines are known to cause interference that could lead to corrosion on pipelines or spills that would threaten the supply of power.

At the end of the day, Green said this could prevent Hydro-Québec from building transmission lines to its neighbouring provinces that would allow them to replace coal or nuclear as sources of energy.

He said he doesn't know why the Quebec crown corporation has opted to take a low-key approach to the hearings by not seeking full status to intervene and participate in the process.

“It’s an important technical issue. It’s a technical issue that might make or break the pipeline project," Green told National Observer in an interview. "In other words, Quebecers will have to choose: Do you want hydro or a dirty pipeline? Because the two can’t happen together because of this conflict.”

TransCanada, which had interference problems from electric lines that led to corrosion soon after it started operations on its Keystone pipeline, said it has learned from previous experiences and is improving its engineering practices.

Marissal's column in La Presse also said that the case is also creating an important leadership test for Prime Minister Justin Trudeau who has promised to have a fair and transparent consultation.

It's all the more of an issue since Trudeau's co-chair from the last election campaign, Dan Gagnier - also a former chief of staff to Charest - was forced to resign in the week leading up to the federal vote in October following revelations that Gagnier had given TransCanada some tips on how to lobby a future Liberal government about Energy East.

"Mr. Trudeau is walking on eggshells in this file," wrote Marisall.

"Governments, including that of Mr. Trudeau, talk a lot these days about the principle of having social licence for a project such as Energy East. But there is more. The ethical licence, a principle that is essential to clean and transparent consultations, is also just as important. The National Energy Board has just failed a first test."