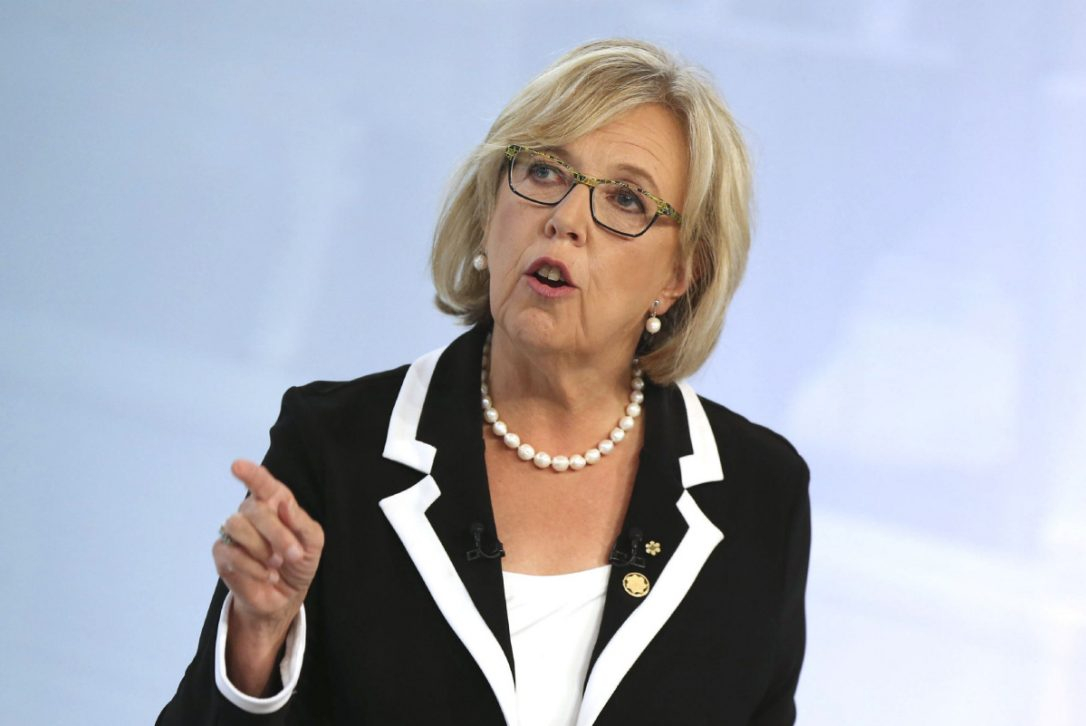 Elizabeth May makes her mark during the 2015 federal election French-language debates in Montreal on Sept. 24, 2015. Photo by Canadian Press.
Previous story
Next story

It won't be much of a summer vacation for Green Party leader Elizabeth May.

The renowned environmentalist and MP for Saanich-Gulf Islands is deciding whether to resign as party leader after members voted to support the Boycott, Divestment, Sanctions (BDS) campaign against Israel.

"I think it is wrong-headed for the party," she told CBC in a news story posted Friday morning. "It's a very polarizing and divisive campaign."

The vote is fracturing the greens. At least two of the four greens currently elected to federal or provincial office have publicly opposed the position. B.C. Green Party leader Andrew Weaver declared BDS to be "polarizing and ineffective." May has long opposed the BDS movement, yet despite her entreaties, a majority of Green Party members voted to support the campaign at their biennial convention in Ottawa last weekend.

The move has forced May to consider resigning, along with other ways to get the party to reconsider its stance. If she steps down as leader, the party will be able to revisit the topic at its next meeting in 2018 or at a leadership convention.

"I need to talk to my family and ask them what they think I should do," May told CBC. "You're talking to a broken-hearted person who is trying to figure out the best way forward."

Elizabeth May would be a "great loss"

May won't be the only person who is broken-hearted if she resigns. Deputy party leader in Quebec Daniel Green said her resignation would be "great loss" not only to the Greens, but the environmental movement in Canada at large.

While he wouldn't divulge which way he voted on the subject during the convention, he said he would like to find a way to reach a party consensus and keep May as federal leader.

May is famous for leading the charge against former prime minister Stephen Harper's controversial anti-terrorism bill, C-51, and her bold criticisms of the environmental policies of both Conservative and Liberal governments. She recently achieved a 94 per cent approval rating from her party members in a leadership review earlier this year.

"It’s impressive what she has accomplished," said Green. "My preference would be to see how to keep this leader that has done incredible work for the party and has made the green party what it is today."

He pointed out the irony that while the Greens are advocating for a proportional representation system of government at the federal level, they voted on the BDS movement using a majority-rules system. May has said on the record that she doesn't believe the party's stance reflects the "genuine will" of its members, and Green himself said he would have preferred to take a more consensus-oriented approach to the tricky political policy.

“I believe if we were given a bit more time, we would have crafted a resolution that could have satisfied everybody, but we just didn’t have the time," Green explained. "A political party should try to figure out a way to have a consensus in its party structure so we can move forward."

Andrew Weaver, an elected MLA and leader of the party in B.C., recently issued the following statement:

“BDS is a politically motivated movement that damages any attempt at peace in the Middle East by assigning blame to one party. It risks increasing tension and does not represent a responsible or thoughtful approach to a difficult international issue. I think it is worth noting that Elizabeth May, as Leader of the Green Party of Canada, has also been speaking strongly against BDS as a polarizing, ineffective and unhelpful movement in the quest for peace and security in the Middle East."

Neither May nor Weaver could be reached for comment on this story. David Coon, leader of the Green Party of New Brunswick and MLA for Fredericton South was likewise unavailable for comment.

May has been at the helm of the federal Greens for a decade, and has said that even if she steps down from leadership, will continue to represent her B.C. constituents until the next federal election in 2019.

:"Politics sanitized for mass consumption" That could become a fitting motto for May's and Weaver's vision of the Green Party. The Green Party movement did not originate in Canada but in Europe. It has always been a movement that incorporated social justice concerns. Even the US Green Party wholeheartedly endorses the BDS movement.

Every other party in Canada is content to look the other way when it comes to Israel's plunge into right wing extremism and the generational oppression of a subjugated people. The Green Party leadership, or at least May and Weaver, would follow suit.

What's going on in Israel? The Israeli army's second top general, Ya'ir Golan, has some idea.

"If there is something that frightens me about the memories of the Holocaust, it is the knowledge of the awful processes which happened in Europe in general, and in Germany in particular, 70, 80, 90 years ago, and finding traces of them here in our midst, today, in 2016.”

General Golan knows the reality of fascism. A German Jew, his parents managed to flee Hitler's Germany in the nick of time. As a boy he saw fascism take hold and spread in his boyhood homeland.

"Things happening in Israel, especially since the last election, bear a frightening similarity to those events. True, the process is quite different. German fascism arose from the humiliation of surrender in World War I, the occupation of the Ruhr by France and Belgium from 1923-25, the terrible economic crisis of 1929, the misery of millions of unemployed. Israel is victorious in its frequent military actions, we live comfortable lives. The dangers threatening us are of a quite different nature. They stem from our victories, not from our defeats."

"The rain of racist bills in the Knesset, those already adopted and those in the works, strongly resembles the laws adopted by the Reichstag in the early days of the Nazi regime."

Golan's voice is just one of many speaking out about Israel's apartheid state policy and the eerily fascist oppression of the captive Palestinians. Would the Greens have stood silent to apartheid in South Africa? I doubt it. Then again they probably wouldn't have calculated whether standing up for what was right in South Africa would have cost them a few precious votes.

I was at the Convention last

I was at the Convention last weekend, and I am as heartbroken as Elizabeth May. I attended as an individual member, at considerable personal expense, in part because I knew this one motion was on the agenda, and I wanted to speak and vote against it, which I did (although I would have liked to have had more time to speak).

I do not believe there was *anyone* present - not one - who supports or condones Israel's progressively more egregious actions in the occupied territories since 1967. But that was not what the motion was about; it was all about blaming one side for everything.

Those who voted against BDS were IMO not turning a politically-expedient blind eye. The Green Party of Canada already has many policy statements condemning those - on any side - who would use violence to resolve issues in the Middle East and elsewhere. Go to the Green Party of Canada website and search "Palestine" and you will find a long history.

But singling out one country for criticism and sanction, while ignoring all of the other actors, contributes nothing towards a solution; it simply echoes partisan rhetoric that can be found in abundance elsewhere. It does not belong on the plenary floor of a party that has devoted itself since its founding to seeking compromise and consensus. The proponents of this motion, however sincere and well-intentioned (and many of them were), were not interested in compromise or consensus at all. And that is very sad, and it does not bode well for the very survival of the Green Party.

The USA has continued to occupy its base at Guantanamo Bay for almost 120 years by dint of overwhelming military superiority, without any regard to the expressed wishes of the people or government of Cuba, and many human rights abuses have occurred there. Yet there was no motion for BDS against the United States. Why not? Does the US Green Party call for such actions? If not, why not? Perhaps because no-one seriously believes that such symbolic actions would have any actual effect other than the loss of membership and electoral support.

The Kingdom of Saudi Arabia routinely violates the human rights of its own citizens, as well as conducting military incursions into neighbouring countries, and conducting a war in Yemen which has resulted in thousands of civilian casualties. And Canada is complicit, by selling armoured military vehicles to Saudi Arabia. But there was no motion before us to urge BDS against Saudi Arabia; or aganist Canada itself, for that matter. Why not?

The ongoing civil war in Syria - with its many outside contributors - has included deliberate military attacks against Palestinian refugee camps. If the proponents of this motion are truly so concerned about the lives and rights of Palestinians, then where was their outrage at these actions at the hands of fellow Muslims? I heard none.

Like RWD, and most if not all of those at the GPC Convention, I am horrified by what I see happening in Israel these days. But I do not believe that the BDS movement represents a productive way forward *within the context of a federal political party*.

BDS just might be the only way to get Israel continually encroaching on Palestine land. At the rate this illegal appropriation of land is going, compared to the rate that Israel is approaching the discussion for a Two-State Solution, there will be no Palestine left to negotiate with.

This N.O. article is

This N.O. article is remarkably devoid of any analysis of the situation leading to calls for BDS, of the parlous situation in Palestine and the role of Israel's decades' old policy of illegal settlement in the Occupied Territories, of Israel's apparently inexorable drift towards the intolerant, pro-settler far right. It seems to suggest, for example, that Palestine and Israel authorities somehow share equal blame for the wretched state of Palestinian refugees around the region, the deepening poverty and isolation of the Bantustans in the West Bank and Gaza. If this is the Observers' view, then it ought to be elaborated, to explain why Elizabeth May, Andrew Weaver and others might oppose sanctions against Israel.

There are many Israeli's and

There are many Israeli's and Palestinians trying to live in Peace. Politics on both sides really suck. Extremism only helps extremists. Don't believe in indoctrination. It will only make you stupid and blind.

Here are people working for

Here is a piece I wrote earlier this year about people working for peace. It also provides a more in-depth analysis of the ongoing Israeli-Palestinian tragedy. https://www.nationalobserver.com/2016/02/16/news/behind-wall-nonviolent-...