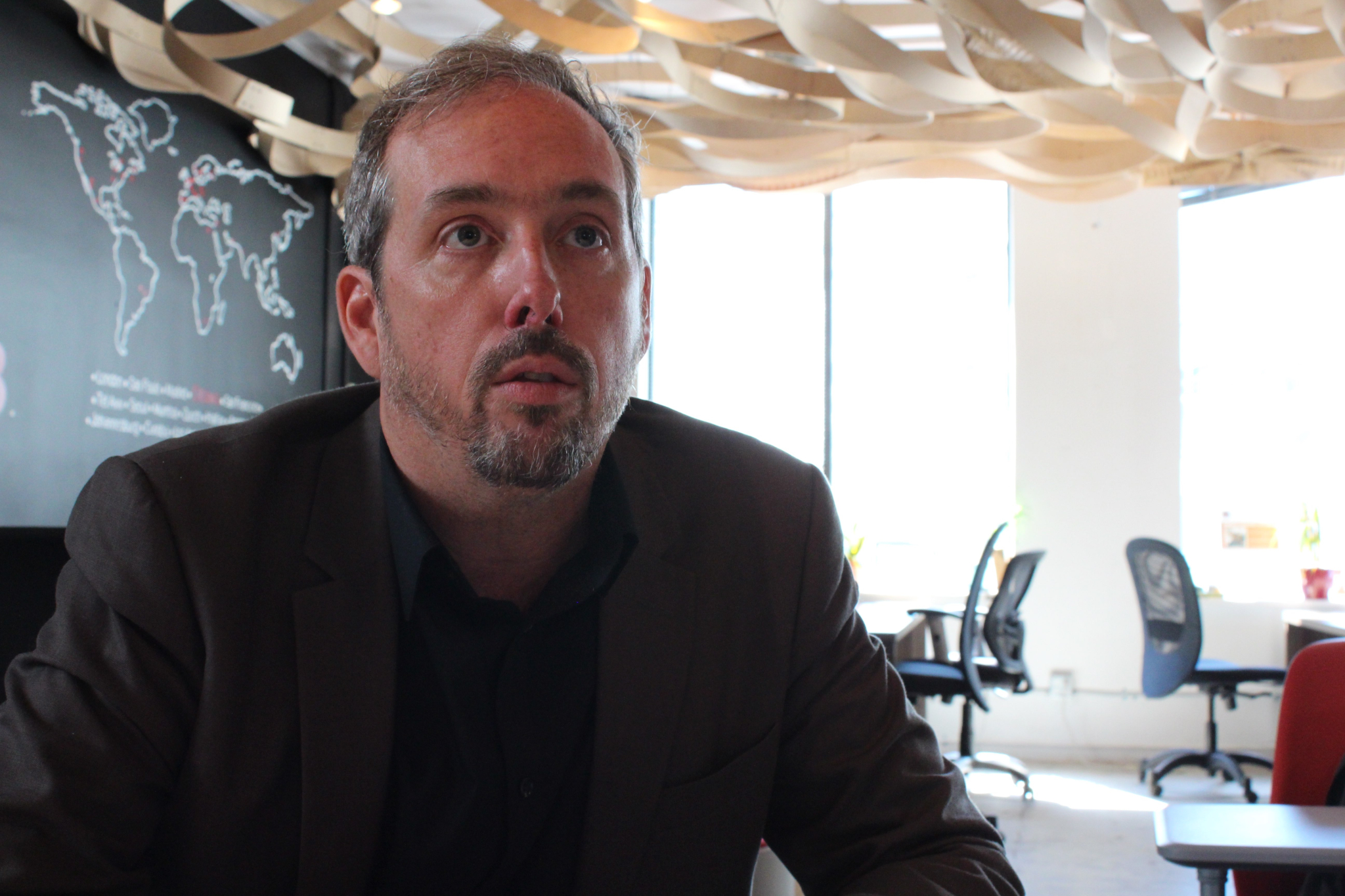 Shawn-Patrick Stensil shook his head in disbelief as he walked out of a Canadian Nuclear Safety Commission public meeting on Thursday.

The commission invited Stensil to speak about nuclear safety issues, but wouldn't let him comment about a remarkable anonymous letter that raised serious engineering and procedural issues questioning whether the agency was doing a bad job overseeing reactors. The commission's president and chief executive, Michael Binder, led a series of jokes ridiculing the whistleblowers the night before, prompting a public rebuke by the union representing government scientists. Today, Binder cut off Stensil’s microphone.

The commission also declined to review Stensil's 26-page analysis of the safety issues raised in the anonymous letter.

"I've never been shut down before like that by the commission," said Stensil in an interview with National Observer after his brief appearance at the meeting.

Stensil is a senior energy strategist at Greenpeace Canada, who has researched nuclear safety policy issues for more than a decade and testifies frequently before federal panels about the issue.

The commission is an independent federal regulator that is responsible for overseeing the Canadian nuclear industry. In other words, it is there to ensure that Canada’s nuclear reactors don’t meltdown and cause a full-scale catastrophe.

"I've been intervening before the commission for 15 years," Stensil said. "They didn't want to see any outside opposing views. They didn't want to ask why it happened in the first place and it also shows that the Harper government is still alive and well at the Canadian Nuclear Safety Commission. Outside views aren't welcome. Dissenting views aren't welcome. And that's a legacy of Harper that the Trudeau government needs to clean up."

The letter, released by Stensil, a nuclear campaigner from Greenpeace Canada, to media outlets in July, was addressed to Binder, who was appointed by the government of former prime minister Stephen Harper. Stensil had received a copy of the letter, along with other senior officials at the commission in May. It suggested that commission employees were not doing their job properly, withholding critical information from commissioners, prior to decisions on nuclear safety.

The letter also alleged that some nuclear plants were violating safety rules and had licenses that were approved following inadequate reviews by staff, who then withheld information from commissioners prior to decisions. The author or authors said that the commission, as a result, failed to identify safety risks at nuclear plants and impose conditions to reduce the likelihood of serious accidents.

Stensil has compared these types of failings to the errors which led to the Fukushima nuclear disaster in Japan that was triggered by an earthquake and tsunami in 2011, causing serious damage in its wake.

"It's very clear from this letter that people (the authors) have inside information about what's going on at the CNSC," Stensil said. "I've seen some of these issues raised in debates internally that I've gotten through access to information (requests). There's a credibility issue here. And when you start dismissing a dissenter as not having expertise, it really shows why they probably did this in an anonymous fashion."

But when Stensil began addressing the whistleblowers' concerns, Binder told him that the commission had discussed the anonymous letter the night before and proceeded to cut off the environmentalist’s microphone.

At that previous meeting, the commission heard testimony from several staff, led by Peter Elder, an engineer and strategic advisor at the commission who presented a report that dismissed the concerns raised by the whistleblowers and defended the commission’s oversight and integrity.

Binder and the commission’s senior staff went a bit further, suggesting that the letter’s author or authors were incompetent.

“So I’m listening to all of you and then the question is was this letter written by our staff?” Binder asked on Wednesday evening, prompting some laughter from staff. “Because the conclusion (from staff) is completely diametrically opposed to anything in this particular letter.”

After another staff member questioned the expertise of of whoever wrote the letter, Binder decided to make a joke about it.

“I’m pretty sure that somebody is going to exploit the declaration of our specialists here in respect to the letter, so I’ll let that take place,” said Jammal. “At no time did we (senior staff) withhold information from the commission, and at no time (were) the public or the reactors unsafe.”

Stensil described the whole exercise as having appeared to be staged to embarrass and shame the author or authors of the letter and discourage others from coming forward with safety concerns.

Binder’s behaviour prompted a rebuke from the union that represents the commission's scientists and which has been trying to ensure that its collective agreements with government include protections for scientific integrity to prevent muzzling.

"Our members who are involved in protecting the safety of Canadians do not take their duties or concerns lightly,” said Steve Hindle, vice-president of the Professional Institute of the Public Service of Canada. “It is unfortunate that Mr. Binder has chosen to make light of such an important issue. But his reaction will not prevent our members from defending the public interest.”

Earlier this month, PIPSC president, Debi Daviau, issued a statement saying that a number of her members were concerned that the anonymous letter and the dismissal of its concerns were more evidence of muzzling.

Stensil also noted that Jammal has previously had a history of reacting angrily to whistleblowers. Records from a meeting with the union officials in June 2014, show that Jammal asked to have concerns about muzzling added to the agenda in response to PIPSC’s “Big Chill” report which accused the former Harper government of muzzling scientists and making decisions that were putting public health and safety at risk.

The minutes of that meeting, provided to National Observer by Stensil, show that Jammal then asked union officials to publicly contradict the findings from that report which suggested nuclear scientists were being asked to manipulate data or hide safety issues. The union never followed up, Stensil noted.

When asked why Stensil was not allowed to comment, the commission sent National Observer a statement explaining that it didn't want public input.

"The Technical Review Report regarding the anonymous letter was added to the Commission’s meeting agenda on August 3, 2016 as an information item," the commission said in the statement. "This was added in order to allow Members of the Commission to consider the findings of the technical review in its public proceeding. The Commission did not invite or solicit interventions, or input from the public, for this item.

I agree, Harperism is alive

I agree, Harperism is alive and well in [at least part of] Canada. Mr. Trudeau, if you have read this article, please correct this huge error

It is increasingly obvious

It is increasingly obvious that boards appointed by, from the ranks of and for the benefit of the old boys club are corrupt, inept and lazy to the core. Appointees seldom have any background or experience in what they are "governing" and have a tendency to meddle with staff that do. Disaster ensues. What we need is appointments for ALL those on boards, regulators, on the public dime to be voted in by those in the same field and overseen by an independent group, with the severe consequences for any political or company interference laid out in their charter. In this case, scientists and experts in the field - not on company payrolls - would choose those in charge. We have no independent publicly funded oversight anymore. Not in Justice, Policing, Environment, health care, agriculture, fisheries, waters, etc, that have not been corrupted by politicians and their agendas. Party makes no difference as Lib/Cons/NDP/BQ/etc have shown both provincially and federally. Look at Brad Wall acting like being pro-pipeline is a separate issue from the spill in Saskatchewan, rather than an inevitable consequence.