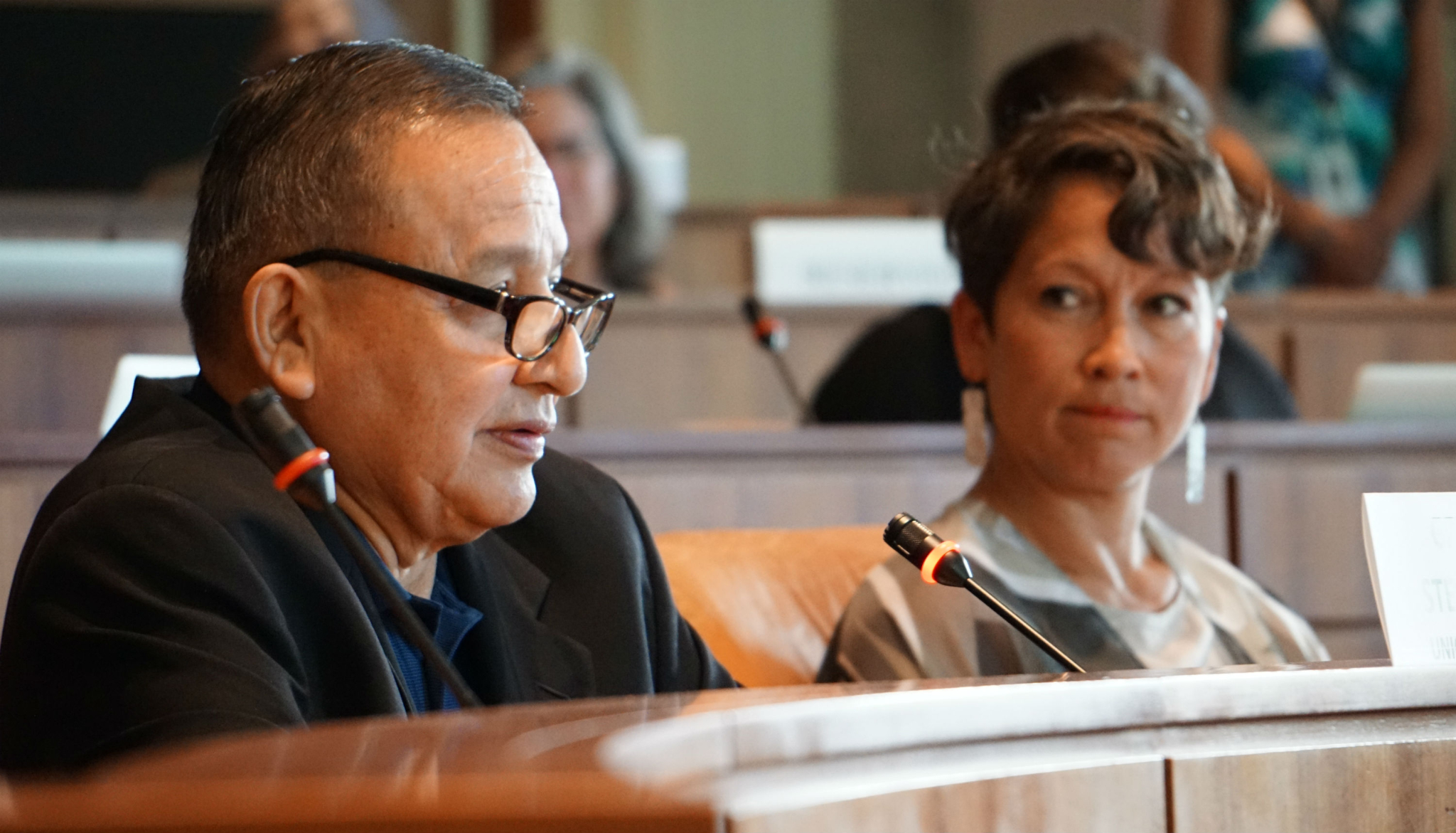 When First Nations activists — particularly in the Musqueam, Squamish, and Tsleil-Waututh territories near Vancouver — get together to talk about pipelines, the occasion is usually marked by a resonant, colourful presentation.

That exuberance was not present however, when a federal panel convened to hear from First Nations about Kinder Morgan's proposed oilsands expansion pipeline to the B.C. coast on Thursday.

Unlike the panel consultation yesterday, which was attended by more than 300 protesters, the defining element in the room today was silence. Only three Indigenous speakers turned up.

But Grand Chief Stewart Phillip, president of the Union of BC Indian Chiefs, told panelists the numbers — or lack thereof — sent a stronger message than any rally ever could.

“We’re not confident in the process. Should we appear to endorse a process that is fundamentally flawed or do we do our speaking in the streets?”

It’s a dilemma Indigenous communities face every day, he added.

His presentation was concise and heartfelt — he was there not because he wanted to be, but because he had a duty. He was there as the Chief of the Penticton Indian Band, the president of UBCIC, and above all else, a loving grandfather.

“We’re in this together,” he told the federal panelists. “It’s not simply an Indigenous issue — it’s a fundamental human rights issue, it’s a climate change issue, it’s an environmental issue.”

The Trans Mountain expansion is a proposal to add 980 kilometres of brand new pipeline to triple the capacity of a system that already transports 300,000 barrels of oil per day from the oilsands to refineries and terminals in Vancouver and Washington. Kinder Morgan, the Texas-based oil giant behind the expansion, claims it will help revitalize sluggish provincial economies affected by the plummeting price of oil, but at least 21 municipalities and 17 First Nations stand opposed.

There are dozens of numbers Grand Chief Phillip could have recited before the panel: it will increase tanker traffic in local waters by 600 per cent, has the potential to spill 16 million litres of toxic oil into marine ecosystems, and has been rejected by more than 140,000 petition-signers across Canada. He’s no stranger to the details — he has protested this pipeline across the province and, in 2014, was one of more than 120 civilians arrested on Burnaby Mountain in B.C.

Instead, the well-known Indigenous activist chose to talk about Indigenous governance, the weight of years under the Harper government, and the very cautious optimism his community feels about the renewed nation-to-nation commitments of the Trudeau administration. He talked about the responsibility of all human beings to avoid the "catastrophic" collateral damage of climate change, and to protect the cultural and economic resources of First Nations far and wide.

“We are here today to take advantage of this opportunity, in spite of our reservations, to say that we do not believe this process that is in place here at the moment goes far enough to address the very serious concerns that not only Indigenous people, but the general public have about the fundamentally flawed NEB process,” he said. “I just sit here and feel the enormous gravity of what we’re here for and what that represents to future generations.”

His words resonated strongly with Vancouver-Mount Pleasant MLA Melanie Mark, a celebrated Indigenous advocate for children and vulnerable populations who sat beside him during his presentation. As a First Nations woman, she too addressed the empty seats in the room as she called the federal panel consultation meetings "a table for privileged people." 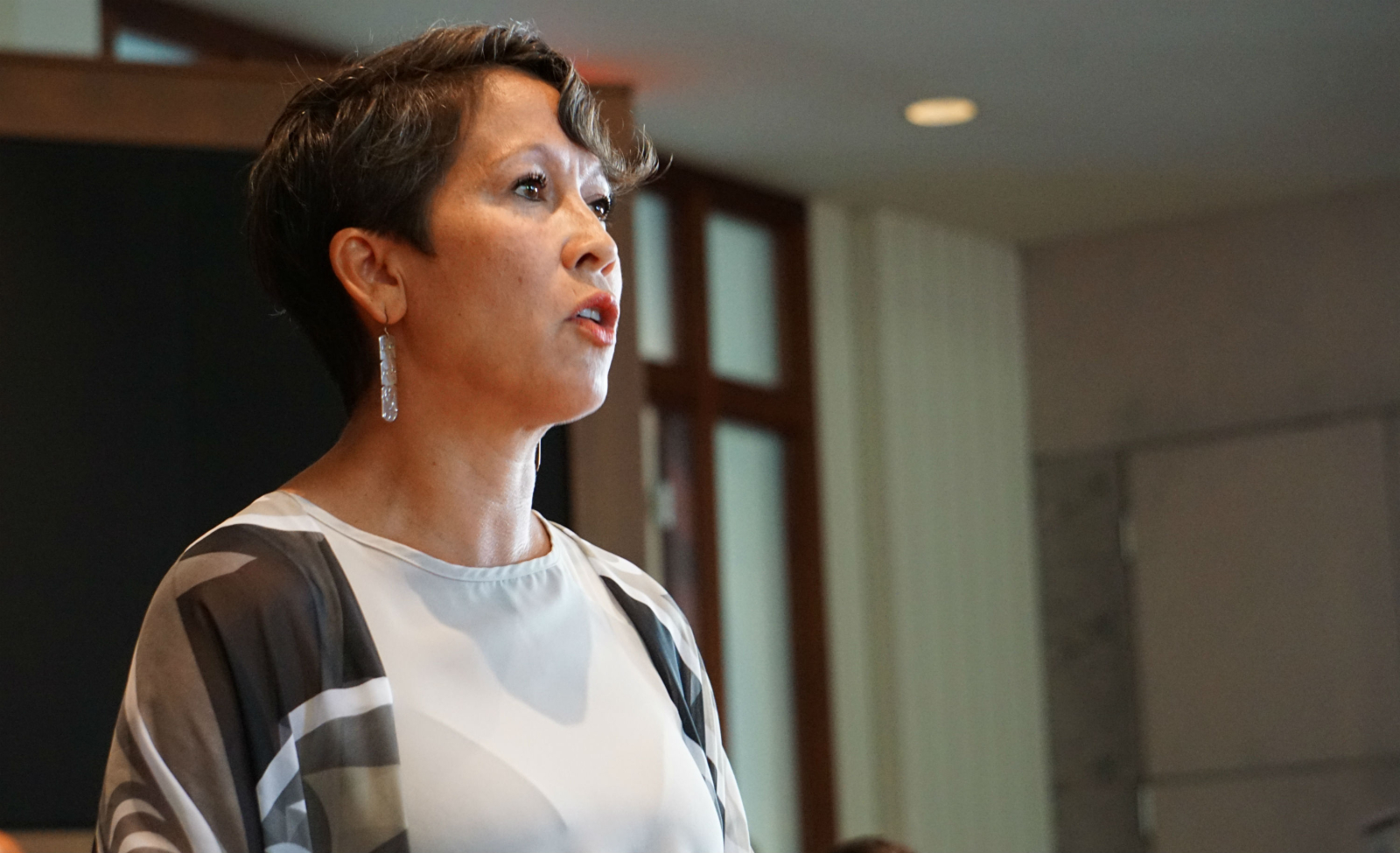 Vancouver-Mount Pleasant MLA Melanie Mark calls out the federal government for creating a pipeline consultation system only accessible to the privileged elite at a panel meeting in Vancouver, B.C. on Thurs. Aug. 18, 2016.

Hearings are designed for the privileged

"When I think of this Indigenous round table, I look around the room and think where are the First Nations people? Do they have the Internet? Were they invited? How do they know?" she asked. "Those are things we take for granted if you have a computer. Not everyone has that privilege."

Mark, a single mother with Nisga'a, Gitxsan, Cree and Ojibway roots, is the first Indigenous woman to serve in the Legislative Assembly of B.C., and was elected to her seat in February 2016. She had not prepared to speak at the consultation that morning; her intention was to be a witness. Upon seeing the empty seats however, she told the panel she felt compelled.

To present at the panel meeting was to have the liberty to take time off from work, she added, to have the educational background required to understand the project and its consequences, and enough information access to know it was being held in the first place. It was a cruel irony, she acknowledged, that the consultation took place at the footsteps of Vancouver's infamous Downtown Eastside (DTES) — a community that is home to thousands of marginalized people, including 10 per cent of the city's Indigenous population, but a community that will be impacted by the pipeline expansion, if approved.

"There’s a saying," she told National Observer, "'Nothing about us without us,' and I think it’s really important that it's the essence of consultation and engagement. Whoever created the terms of reference [for this panel], I don’t know if they had those principles in mind.

"Where are the children? Children have a right. It’s not just Indigenous people. A lot of us that have been able to take part in the last few days have a point of privilege. We should be mindful of those who are not here."

Accessibility concerns across the board

While the federal panel consultations on the Trans Mountain expansion have been open to the public, many organizations and speakers — like Mark — have criticized how its genuinely accessible it truly is. Popular concerns raised include the timing of the meetings (both during business hours and the summer, while many are on holiday), and the fact that audio recordings or exact transcripts of the meetings will not be made available for those who could not attend.

The lack French interpretation has also been raised — despite more than 45,000 francophones living in Vancouver's Lower Mainland alone, Natural Resources Canada did not hire a formal translation service for the panel consultations. Up until this week, neither the ministry nor the panel itself made participants aware that bilingual staffer were available on site to translate for francophones. The matter was rectified after a National Observer story brought the oversight to light.

So far, more than 400 speakers have presented a panel meetings attended by over 1,000 observers. Those who would like to weigh in on the Trans Mountain expansion but cannot attend a meeting in person can participate in an online questionnaire, or send the panel and email.

WHY IS IT THAT WE HUMANS DO

WHY IS IT THAT WE HUMANS DO NOT YET UNDERSTAND THAT WE ARE DESTROYING OUR HOME, THIS EARTH AND ATMOSPHERE WITH CARBON AND MILLIONS OF OTHER WASTES THAT WE JUST ASSUME NATURE WILL TAKE CARE OF.
WE ARE IN CRISIS. DOES ANYONE REALLY CARE?