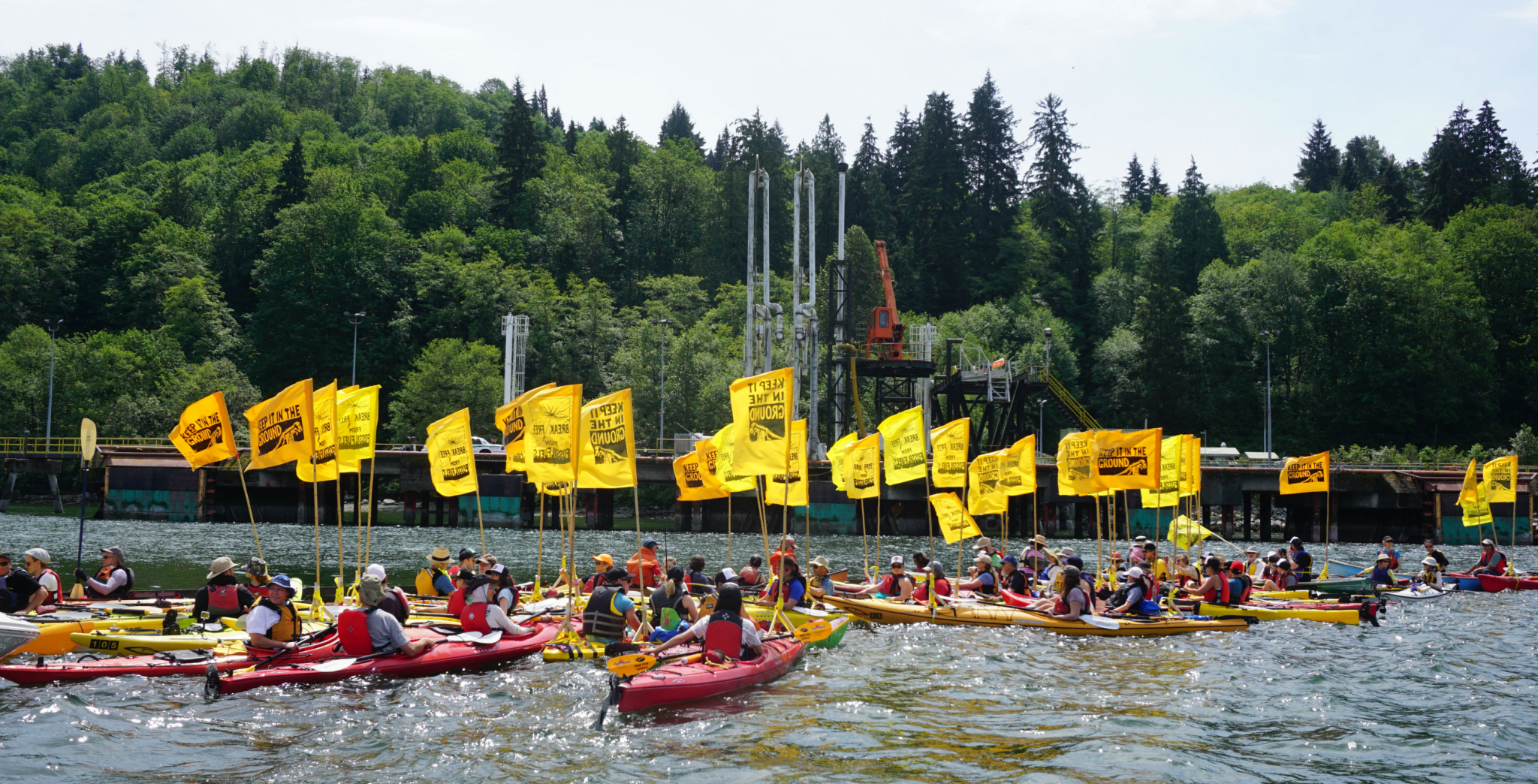 More than 200 kayakers descend upon the Kinder Morgan terminal in Burnaby, near Vancouver, B.C. during a protest on Sat. May 14, 2016. Photo by Elizabeth McSheffrey.
Previous story
Next story

They came from all over North America and their chants echoed over the waters on Saturday as they gathered around a major oil tanker terminal near Vancouver B.C.

All of them had a message to the energy industry and the terminal’s owner, Texas-based pipeline operator, Kinder Morgan, the continent’s largest energy infrastructure company: the population wants energy companies to move away from oil and "keep it in the ground."

There were dozens on kayaks and hundreds more marching on foot, encroaching on the terminal's private property in a collective act of civil disobedience.

“The age of oil is over,” shouted Grand Chief Serge Simon of the Kanesatake Mohawks, who travelled from the Montreal region to attend the demonstration. “With your help, if we all pull together, this thing is only going to be a sorry memory in our history.”

The weekend protest was organized by multiple Canadian environmental groups and Indigenous leaders to coincide with global action to "break free" from fossil fuels in Germany, Nigeria, Brazil, New Zealand, and other countries.

For the Canadian protesters, their primary target was Kinder Morgan’s proposed Trans Mountain pipeline expansion. The company said it respects the right of people to protest peacefully.

Canada’s National Energy Board has spent months reviewing Kinder Morgan's 23,000-page project application and will submit its recommendations to the federal government by this Friday. Prime Minister Justin Trudeau's cabinet is expected to make a final decision by the end of the year.

If approved, the expansion project would add 980 kilometres of new pipeline to a system, nearly tripling its capacity from 300,000 barrels of crude oil per day up to 890,000 barrels per day. This would open up access for crude oil and petroleum producers from Alberta to refineries and export terminals in Vancouver and Washington.

Originally announced as a $5.4-billion project, the project's estimated costs are now reported to exceed $6.8-billion. The Trans Mountain expansion is also expected to generate at least 4,500 construction jobs at peak employment, and $23.7 billion in additional taxes and royalties for provincial and federal governments.

Environmentalists and climate change scientists have said that the benefits are not worth the risks for Kinder Morgan's proposal and other pipeline expansion projects. These critics say that Canada is not on track to meet its existing greenhouse gas reduction targets and that the government should focus on blocking all expansion of the oil sands industry, the country's fastest growing source of carbon pollution.

"Our scientists are telling us very clearly that we need to dramatically reduce our greenhouse gas emissions and these pipelines send us in the exact opposite direction," said Mike Hudema, Greenpeace energy and climate campaigner.

"Here today, we're seeing hundreds of people willing to risk arrest to send that message to the prime minister, and if he goes against his own commitments and pushes this pipeline through you’re going to see a much stronger opposition rise up to meet him."

Sacred obligation to protect the land and water

The Trans Mountain expansion has been hotly-debated since its inception and is the current subject of a federal lawsuit from the Tsleil-Waututh Nation. If constructed, the pipeline would increase tanker traffic in the coastal Burrard Inlet nearly seven-fold, threaten endangered Southern Resident killer whales, plough through unceded Indigenous territory, and expose people and wildlife to the potential impacts of a major oil spill in the Fraser River or Salish Sea.

"I’m here to make sure my sacred obligation to protect my territory from harm and damage is present and accounted for,” said protester Khelsilem of the Squamish First Nation, carrying his drum and paddle. He delivered a speech to protesters in his ancestral language before taking to the water to cross into Kinder Morgan's private property.

"What really pisses me off about this pipeline is that our global community is facing an existential crisis and these projects are a way of the past, but they’re a last ditch attempt by very greedy groups to try and run roughshod over the rights of my people and other Indigenous people to get at what is essentially, wealth for themselves as opposed to taking care of all the people of our territory.”

Only two police boats were present during the peaceful protest for the safety of its participants, but Kinder Morgan hired private security to monitor the action from the terminal.

"Trans Mountain understands and appreciates that there are a variety of opinions about our proposed expansion project and we respect the right to peacefully demonstrate and express those views," Kinder Morgan said in a statement sent to National Observer. "There were no interruptions to safe operations as a result of today's demonstrators."

By Mike De Souza | News, Energy | January 27th 2016
Reports from the Race to a Safer World