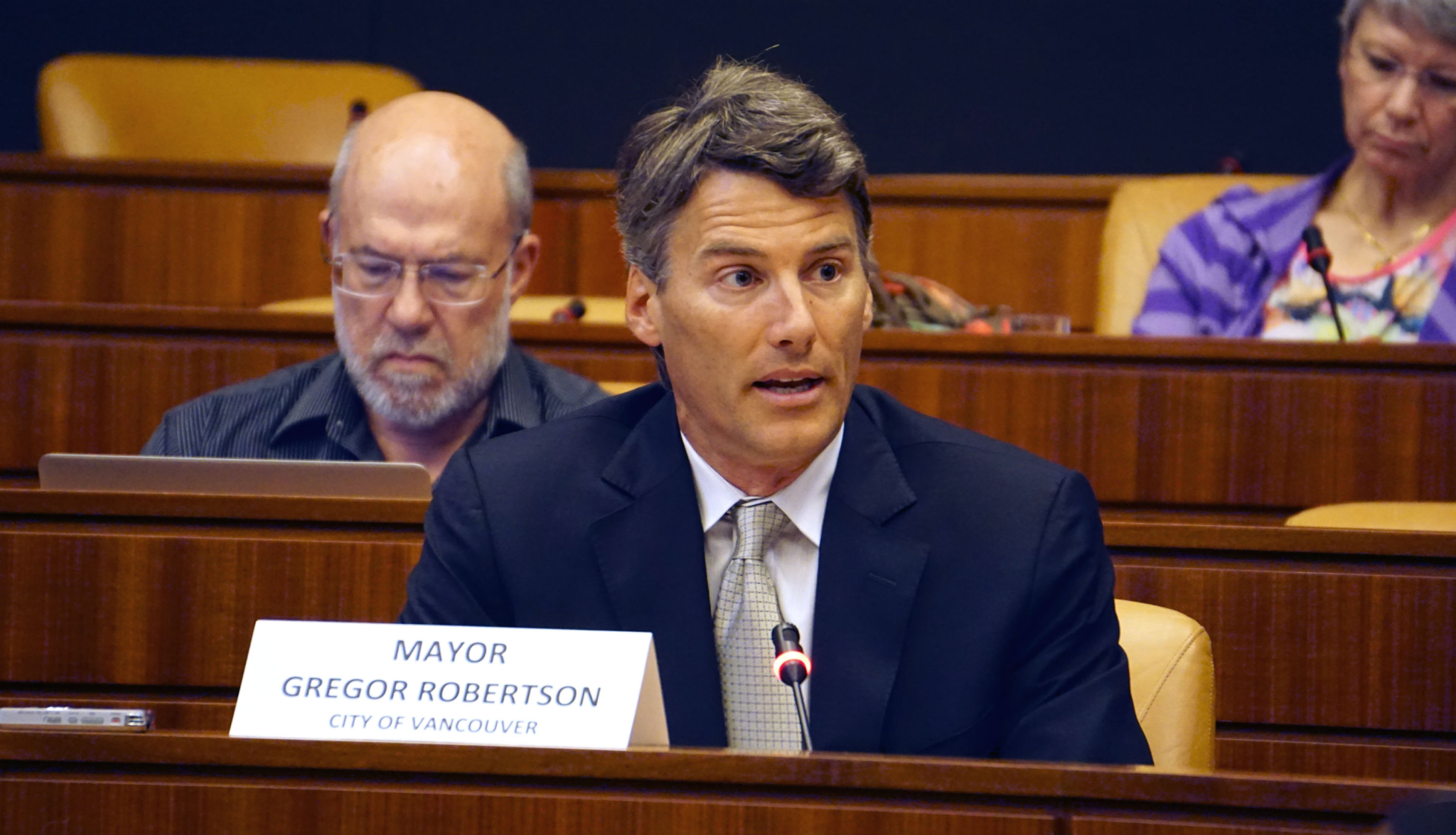 Vancouver Mayor Gregor Robertson says the Trans Mountain expansion is too dangerous and Prime Miniser Justin Trudeau should send Texas-based Kinder Morgan packing when his cabinet announces the fate of the pipeline later this year.

Roughly 80 per cent of Robertson's constituents oppose the expansion project and, according to thousands of pages of test results compiled by the city's consultants, it would expose Vancouver residents to "disastrous" health, economic, and environmental risks if approved.

The pipeline would increase tanker traffic by 600 per cent, Robertson argued, decimating Vancouver's green reputation even without a critical oil spill.

"The federal government needs to say no," he told panelists appointed by Natural Resources Canada at a public consultation in Vancouver on Tuesday. “Unlike the National Energy Board (NEB), we reviewed the totality of the evidence and there is no question from our analysis that it’s not worth the risk and in fact, is not in Canada’s best interests.”

"Many, many voices were shut out"

The Trans Mountain expansion proposal would add 980 kilometres of brand new infrastructure to triple the capacity of an existing pipeline that already transports 300,000 barrels of oil per day from the oilsands to refineries and terminals near Vancouver and Washington. It was approved by the NEB in May, along with 157 environmental, technical and financial conditions.

Soon afterwards, the federal government moved to address widespread concerns that the NEB's review was a "fraudulent, broken sham" by appointing three independent panelists to collect additional feedback from communities, Indigenous groups, and other stakeholders.

Robertson said the NEB did not permit oral cross-examination of Kinder Morgan or its scientific evidence during formal hearings for the project, and omitted critical evidence on impacts from climate change and the overall economic viability of the pipeline in a post-COP21, carbon-constrained world.

"Many, many voices were shut out of the process," he explained. “Of all the evidence, what stands out the most for us is people who have come to Vancouver City Council have contacted us begging for someone to hear them... The fact that so few people are coming to hearings this week here I think is symbolic of the lack of faith in democracy and the regulatory process."

The panelists scribbled hand-written notes on the mayor's presentation, which was supplemented by technical comments from city manager Sadhu Johnston. Johnston outlined the serious health and environmental damage the pipeline could do if it were to spill from tankers in Vancouver's harbour waters, or salmon-spawning routes to the Fraser River.

Based on tests done by contracted scientists, he said more than one million people in the region could be exposed to dangerous levels of toxic fumes released by spilled diluted bitumen. More than 10 million people visit Vancouver's beaches, parks, and water attractions during the summer, he added, which would put them directly at risk.

"We really believe that further research is needed," he told panelists. "Exposure to crude oil and its evaporated gas components can cause visible and permanent harm to people, and the challenge is, how do we respond to an air quality emergency?"

A devastating oil spill from the MV Marathassa in Vancouver's English Bay last year already proved that industry can't handle a water quality emergency, he said (the municipality wasn't notified of the spill under 13 hours after the fact), and Kinder Morgan's existing Trans Mountain pipeline in Burnaby, B.C., has already leaked once.

If its new addition were to spill, Kinder Morgan has said the worst case scenario is 16 million litres of dumped oil — enough to kill 100,000 sea and shorebirds, decimate harbour seals and salmon, and put the area's endangered Southern resident killer whale at further risk of extinction, according to the city's estimates.

The City of Vancouver is one of at least 21 municipalities and 17 First Nations that have come out guns blazing against the Trans Mountain expansion, which has been opposed by nearly 90 per cent of the 400 presenters at the panel consultations across B.C. and Alberta. Despite these overwhelming statistics, one stakeholder at the Vancouver meeting said he didn't feel like a "lone wolf" while speaking in favour of the expansion.

"The Trans Mountain project will generate approximately 15,000 construction jobs and an additional 37,00 indirect jobs," said Tom Brown of the Progressive Contractors Association of Canada. "Of the $18.5 billion in economic benefit from this project, roughly $560 million will be spent in services along the pipeline route — accommodations and food in the various communities on the project mainline."

Skilled tradesmen and labourers across the country — particularly in Alberta where plummeting oil prices have sent unemployment skyrocketing — need work, he argued, and their salaries contribute to the social benefits and services that make Canada the country it is today. While he acknowledged the concerns of project opponents as "legitimate," Brown urged the panelists not to favour the concerns of a few special interests groups when filing its report to the federal government.

He also admitted that he is also part of a special interest group, and that thousands of members of his association will gain employment if the Kinder Morgan project is approved.

"My point was we should be looking at the national interest and what’s good for the entire country, and making sure we consider the various representations from everybody," he told National Observer. "The NEB clearly states that this should be a go, and I think that’s a very technically sound and well-prepared, well-enunciated document."

Brown wasn't familiar with Kinder Morgan's disastrous environmental record across North America, but said locally, he feels confident that all will go as planned.

"We have very well-trained and confident workers who build these pipelines," he explained. "That’s not to say there won’t be the odd leak here and then, but most of those are findable and fixable in short order typically.”

The federal panel on the Trans Mountain project will conduct five more days of meetings in Vancouver, North Vancouver, and Victoria, for a total of 44 consultations. Canadians can still weigh in on the expansion online through questionnaire or email, and the panel reports that more than 16,000 have already done so.