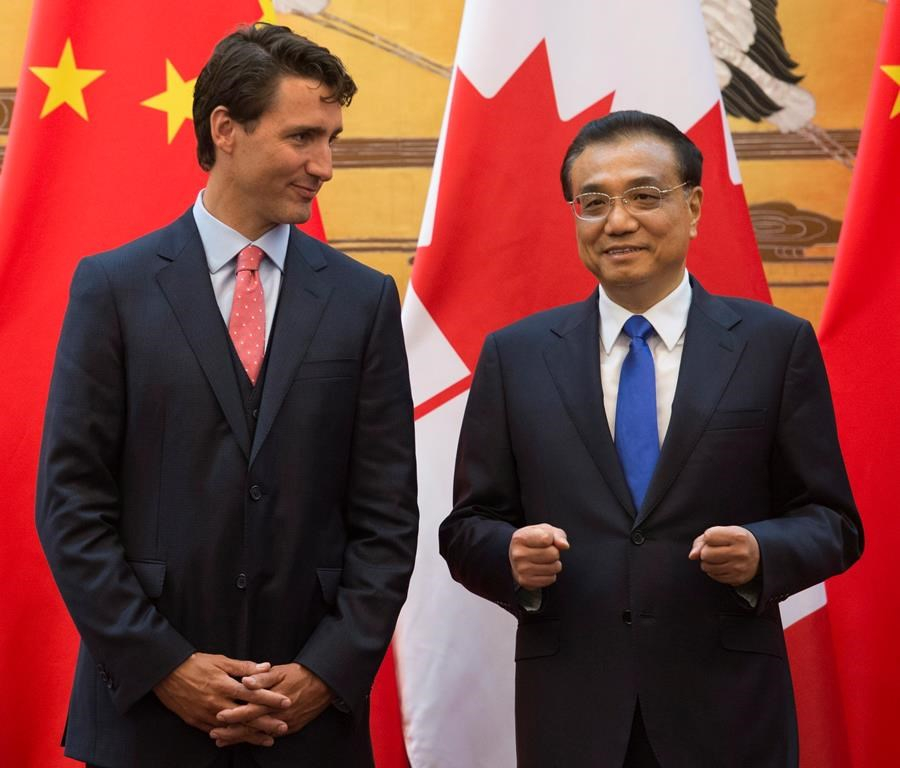 Justin Trudeau has announced plans to apply for a controversial new international infrastructure bank led by China — an initiative Ottawa insists will provide a boost to global and Canadian growth.

The Canadian government made the announcement Wednesday after the prime minister met with Chinese Premier Li Keqiang in Beijing. Ottawa did not immediately specify how much money it would put into the eight-month-old bank.

China established the Asian Infrastructure Investment Bank in hope of building its economic credibility around the world. The bank will provide other countries in the region access to capital for projects like transportation, power and telecommunications.

Finance Minister Bill Morneau, who is travelling with Trudeau in Beijing, expects the bank to make an important impact on the global economy, and therefore the Canadian economy, through infrastructure investments.

Canadian firms can benefit, too, he added.

"Participation in the bank is clearly in Canada's best interests."

The bank, which has about US$100-billion in capital, has already invested more than US$500 million in Bangladesh, Indonesia, Pakistan and Tajikistan. Chinese officials have said it plans to loan out US$10-15 billion over the next five years.

Canada is aiming to become the first North American member of the bank.

By joining, Canada would add its name to the list of 57 other member countries. The group includes Australia, the United Kingdom, France, Germany and South Korea, which signed on last year in the face of opposition from the United States.

In order to join, countries agree to contribute funds in the form of shares. Australia agreed to contribute $930 million over five years, making that country the sixth-largest shareholder.

The bank's governors could decide on new members early in 2017, according to a Canadian government document, which also indicated that the size of Canada's share would be decided at that time.

American officials have warned the new bank would provide loans to developing countries without requiring any caveats about the environment, labour rights or anti-corruption reforms, as are typically included in loans from the World Bank and International Monetary Fund.

Jin told reporters that Canada's intention to join was a vote of confidence in the bank.

"This decision also indicates that Canada, like many new applicants, affirms the way this new bank is being run in the first eight months of operation and trusts in the bank's unswerving commitment in the years to come," Jin said.

On Tuesday, Trudeau hinted that Canada's application had been in the works.

"My government believes very, very much in the importance of investing in infrastructure," Trudeau said during a roundtable discussion with business leaders.

"That's one of the reasons why we're looking very favourably at the possibility of joining the AIIB."

Prior to Wednesday's announcement, former Canadian diplomat Charles Burton said joining the bank would signal Canada was prepared to see China take a seat at the table in terms of having input on the global economic landscape.

"By supporting this institution that's primarily initiated by China indicates that we're trying to build trust that China will use this institution for the greater good in a liberal, internationalist way and not simply as a device to expand its geopolitical reach," said Burton, a political scientist at Brock University.

But there is still some wariness in official Ottawa about supporting China's global influence, particularly with its recent actions the South China Sea, said Paul Evans of the University of British Columbia's Institute for Asian Research.

But Evans said most officials feel Canada made a mistake by not joining the bank last year.

The four projects approved earlier this year addressed many of the concerns western countries had about the new bank, he said, including that China would use it to advance its own strategic and commercial interests.

While the cost — which he estimated will be as much as $1 billion — could be high, he agreed that Canadian firms would indirectly benefit from the billions of dollars in projects the bank will finance.