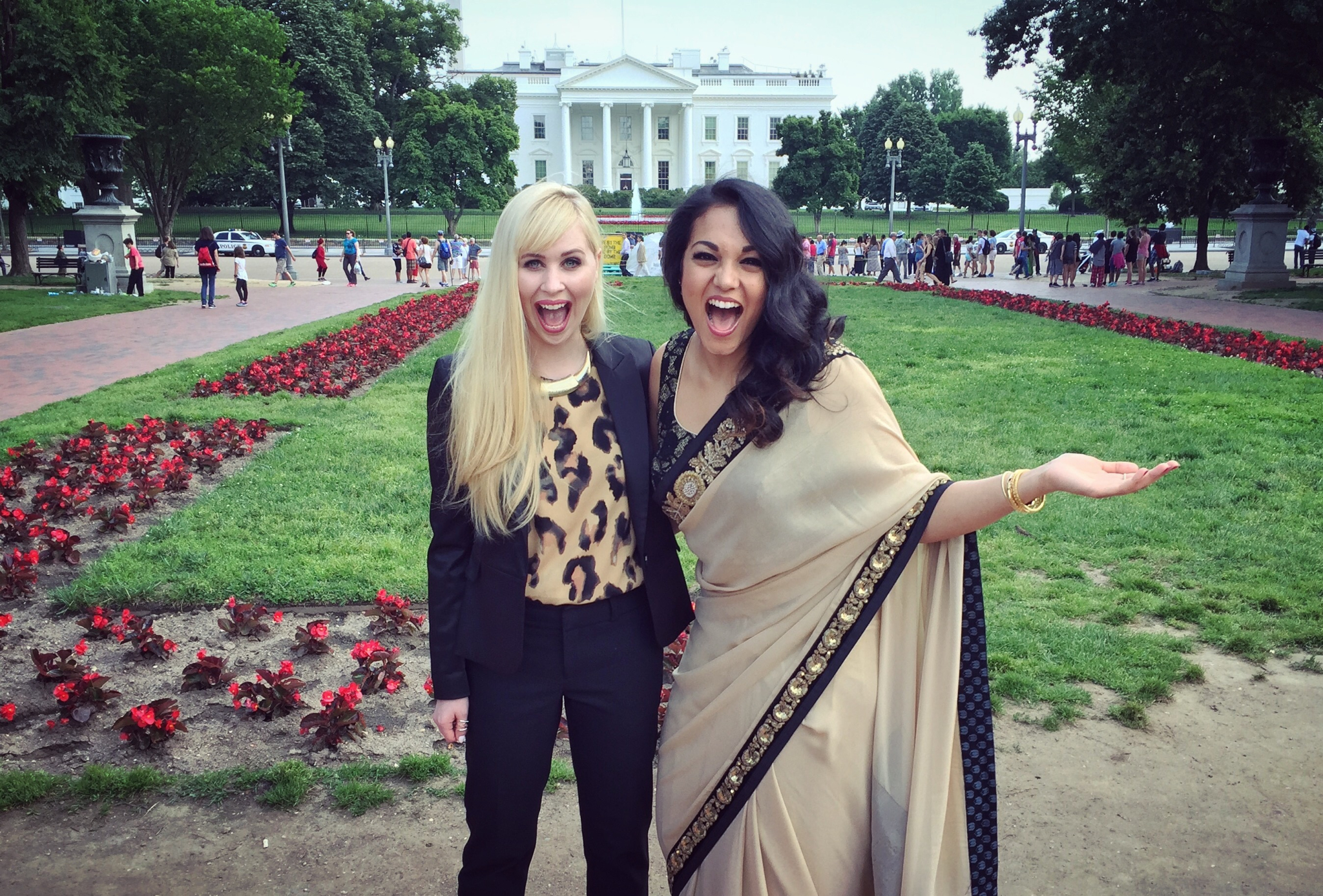 Komal Minhas has never been the kind of woman who takes 'no' for an answer.

At the age of 23, she strong-armed her way into meeting Oprah at a special event in Ottawa. Minhas hassled organizers until they coughed up a backstage pass. She had grown up watching Oprah on the TV in her living room, and wasn't about to let the opportunity to meet one of her heroes pass her by.

She got herself face-to-face with the legendary producer and philanthropist, and Minhas told her:

It was a fleeting interaction. Oprah laughed and gave her hug before proceeding to meet the next person in line. But three years later, Minhas and Oprah would connect again — only this time, the celebrity would be asking her for a meeting.

In August, Minhas and her business partner, Erin Bagwell, were named on Oprah's Super Soul 100 list of "awakened leaders who are using their voices and talent to elevate humanity" for co-founding the feminist entrepreneurial film, Dream, Girl. Minhas said Oprah didn't remember that they had ever met, and her praise for the documentary was entirely coincidental.

It was a jaw-dropping level of recognition, and Minhas felt like the cosmos had aligned around her.

"It just seemed like a beautiful connection of so many things in my life I’ve admired," said the budding 26-year-old media mogul. "The acknowledgement of what we’re doing... is about Erin and I like two per cent, and the other per cent is about this impact we hope to make with Dream, Girl.”

The documentary, which recently premiered at the White House, aims to inspire the next generation of female leaders by highlighting everyday women whose million-dollar ideas have changed the world around them. Four of its five main characters are women of colour, a segment of society that rarely gets a spotlight on screen.

Minhas is an Indo-Canadian currently living in New York City, and comes by her bold style of doing business honestly. She hails from a family of highly-successful Indian entrepreneurs, who have risen to business prominence in her hometown of Grande Prairie, Alta.

It was clear from a young age that a regular, nine-to-five office job was never in the cards for Minhas — in 2010, before she had even finished her journalism degree at Carleton University, she shipped herself off to Palestine’s West Bank to film the stories of young people growing up in a conflict zone. She later pursued social innovation studies from the University of Waterloo, landed internships and consulting gigs, but never felt like she was making the most of her talent.

Eventually, Minhas was fired from her communications job (after a three-month probationary period, her boss didn't think she was a "good fit"), and started her own visual media consultancy, KoMedia, driven by a passion for enabling women through mindful business. She was soon named a Global Shaper by the World Economic Forum, and in 2014, she helped roll out Coca-Cola's #5by20 female empowerment project in Canada.

It was around that time that she found Erin Bagwell, raising funds for Dream, Girl on Kickstarter, and knew instantly she needed to be involved.

“It was always a no brainer that I wanted to help people," she said. "[Erin and I] are women who have experienced sexual harassment, we are trying to make our way in the private sector, and really prove ourselves as entrepreneurs — we need to advocate and be a voice for other women in the sector and other women who are up and coming."

The documentary took two years to put together and features the magnificent work of female investors and entrepreneurs across North America.

“It's a very broad look at entrepreneurialism, the journey of those women, and what it took them to get to where they are," Minhas explained. "We get to see them as role models, which we haven’t really had the ability to do outside of your Arianna Huffingtons and Oprah."

Dream, Girl has been met with resounding success so far, with over 300 requests for screenings in 27 different countries and dozens of screenings in Canada and the U.S.. The documentary landed Minhas a speaking engagement at the Cannes Film Festival in France last year, and a feature with Bagwell in a TEDWomen campaign. The tenacious pair have been praised in media outlets like Forbes, Vogue, The Washington Post, among others, and this year, Dream, Girl was named the number one "Feminist Film to Watch" by Huffington Post.

Together, they premiered the documentary at the White House in May 2016 as a special selection by the White House Council on Women and Girls. Instead of focusing on the magnitude of that recognition, Minhas preferred to talk about Dream, Girl:

“All the starry-eyedness, all the celebrity status doesn’t overshadow what we’re trying to do in my books," she said. "We have another two years if not more of sharing the film with the world, having screenings booked, and getting digital copies into people’s hands."

She and Bagwell would also like to write a book about their experience with the film, and begin touring North America this fall to talk about the documentary. They are hoping to make it publicly available next year on platforms like Netflix and iTunes.

In the heart of the action, a cancer diagnosis

But the road to success hasn't always been rosy, she told National Observer. In March, less than three months before the film's launch in New York and Washington, D.C., she was diagnosed with a very rare form of skin cancer that — while highly-treatable — threatened to tank her plans for showcasing Dream, Girl.

It was a sign from her body that she needed to take a break, said Minhas, who moved back home to undergo surgery.

There was very little recovery time. Less than a month after her first operation, Minhas lit up the stage at the White House premiere and the film launched globally at the renowned Paris Theatre in New York City. Still recovering and in regular pain, she continued to run the Dream, Girl business with Bagwell until her second operation in July.

“It was so surreal coming out of barely being able to move a few weeks ago and being in so much pain, and taking all these meds and hating my meds, and wondering what I’m doing in this world, to now this and being able to be brought back to life," she said.

Despite her overwhelming success, Minhas admitted to battling bouts of depression throughout the Dream, Girl journey and earlier in her life. Strapped for cash during production, she had already asked her parents to invest in the film, and after being diagnosed with cancer, she relied heavily on the support of her business partner, boyfriend, family and friends.

It felt like her independence had been taken away, she said, and it has taken her a while to come to terms with the fact that asking for help is not a sign of weakness.

“I don’t know a lot of people who choose this path without a significant struggle or without a lot of baggage or grief," she explained. "But I'm really excited to prove ourselves and the power of this business model, and to prove that a lot of millennials do come from a place of privilege and support, and it’s okay to take that support and go after your dreams.”

Minhas has now completed her cancer treatment, and is focusing on touring Dream, Girl, recovering from surgery, and learning to play the piano. She's also busy advocating for another of her female heroes, Democratic presidential nominee, Hillary Clinton.

Clinton is another celebrity Minhas met through her 'innovative' tactics — in 2013, she snuck out of the press room at Clinton Global Initiative and asked the recently retired Secretary of State for a photograph. She has always been a fan of the former first lady, and Minhas said she supports Clinton not only because she's a woman, but because her political competence and record of public service make her one of the strongest candidates she's seen in her lifetime.

"It’s been said many times that [Clinton] has undoubtedly done more than enough service for the country, for the world through the Clinton Global Initiative, through her work as Secretary of State, through her time in public office, that she could happily go into retirement," said Minhas.

“And I think with such a media hell storm against her and so much negative press and attention that has come her way, I think that as a human being, if it were coming from a place of entitlement or of overstaying her welcome, a person wouldn’t knowingly endure the kind of criticism and character assassination that Hillary Clinton has chosen to endure.”

She also believes Clinton, if elected, will be one of few presidents who walks into the Oval Office with a firm understanding of how to conduct business, thanks to years of time in the White House already. She acknowledges concerns raised about Clinton by Republican opponents — namely ties to corporate money and the email investigation scandal — but believes her strengths far outweigh her weaknesses, and there's no comparison between her and Republican candidate Donald Trump.

“I just see in her policy-making ability, and how she makes such collaborative, collective decisions, it would never be haphazard, unintentional or without sound advice," said Minhas. “And this is through getting to know people who surround her politically, just through my engagement in New York."

"If Trump is elected, I will be in fear of my whole existence as a woman and a person of colour. But I genuinely believe that won’t be the case.” 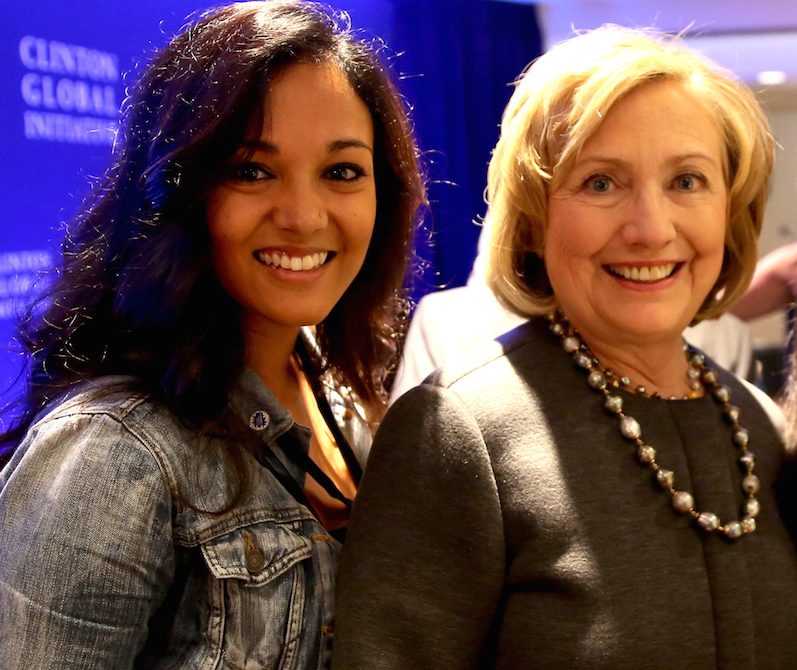 I hate to say this: although

I hate to say this: although I celebrate Komal and Erin's success as if they were my own daughters, I sincerely hope they will see through the neo-conservative activities of such as the Clintons, and find much more worthy role models.