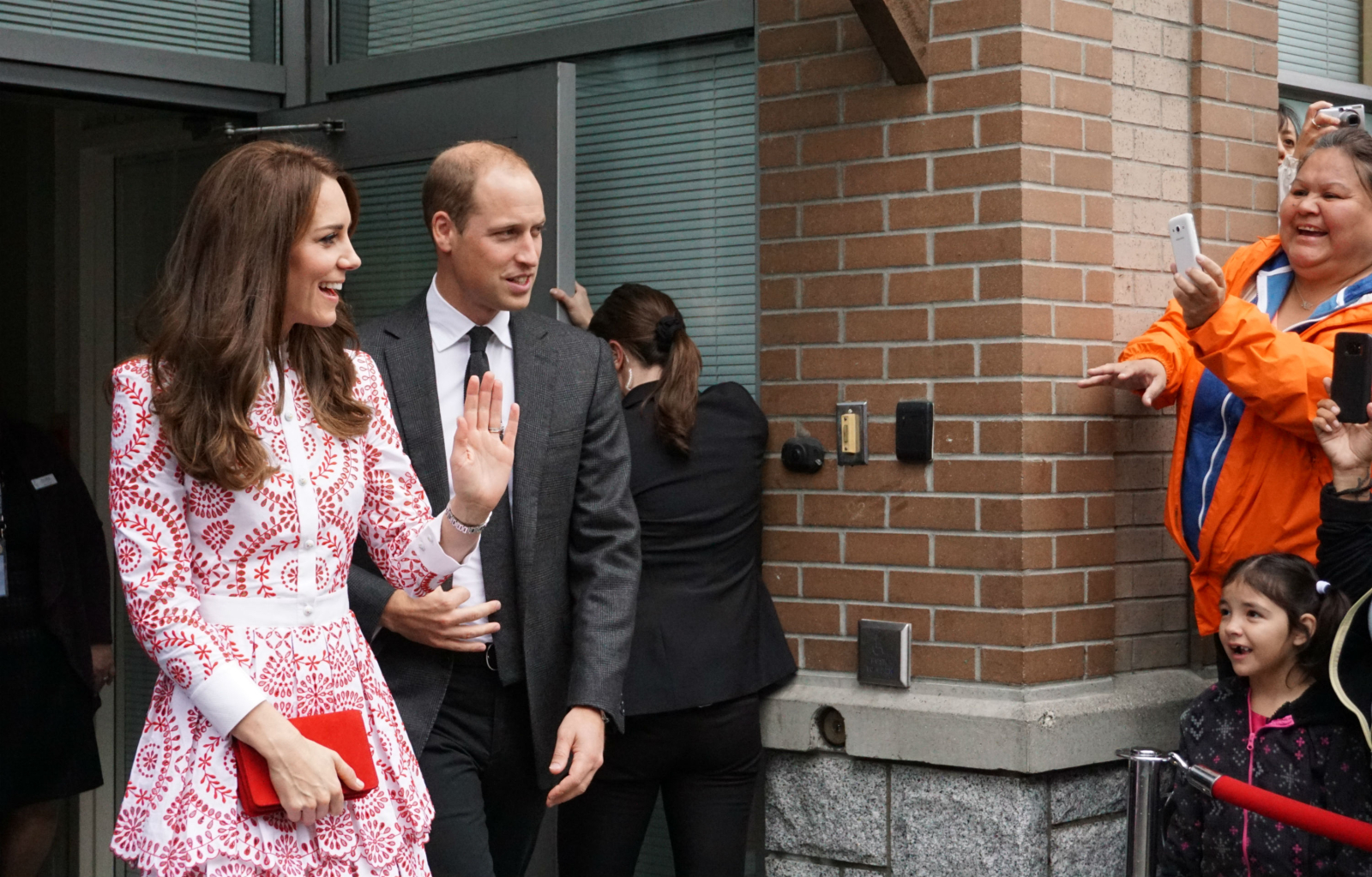 The Duke and Duchess of Cambridge greet adoring fans outside of Sheway Vancouver, an outreach program for pregnant women at risk in Vancouver's Downtown Eastside, Sun. Sept. 25, 2016. Photo by Elizabeth McSheffrey.
Previous story
Next story

Thousands of adoring fans flocked to designated hot spots in Vancouver this weekend, hoping to catch a glimpse of, or perhaps even a handshake from Their Royal Highnesses, the Duke and Duchess of Cambridge.

Prince William and his wife Kate — without little Prince George or Princess Charlotte — spent Sunday touring a selection of the coastal city's landmarks, including the Jack Poole Plaza and Olympic Cauldron, the Immigrant Services Society of British Columbia, the TELUS Garden, and Kitsilano Coast Guard Station. They met newly-settled Syrian refugees, had scones and tea with some of the city's most vulnerable populations, congratulated Canadian youth for their exceptional accomplishments, and thanked marine first responders for their service.

They sped off in a massive hovercraft to cheers from the crowd, many of whom waved British flags, sported feathery fascinators, or raised their cell phones high into the air, hoping for the ultimate royal selfie. In case you missed all the coverage, here's the highlight reel of National Observer's photos.

1. Trying to squeeze through the crowds

The line up to see Will and Kate in Vancouver's infamous Downtown Eastside stretched the length of several city blocks, took up the entire width of the sidewalk, and spilled into the opposite side of East Hastings Street. Most waited for more than an hour in order to catch the couple enter Sheway Vancouver from their motorcade and watch them leave for their next destination. They Tweeted, Snapchatted, and Instagrammed the proceedings, and a few lucky fans in the front even got to shake the royals' hands.

​Will and Kate greet Sheway pregnancy outreach program manager Patti Zettel (in red) shortly after their engagement at Jack Poole Plaza, around 11:15 a.m. Sheway Vancouver is a program for vulnerable Downtown Eastside mothers struggling with mental health issues and addictions. It offers its participants support for a healthy pregnancy, a healthy delivery, and after birth, provides nutritional food, clothing, and assistance with housing. The royal couple decided to focus their tour in Canada on environmental, social, and health initiatives, in what some consider to be a subtle nod to the compassionate and charitable legacy of Princess Diana.

3. Waiting for her prince to come

Five-year-old Keira Latta — today known as Snow White — waits for Prince William and Kate to return after their meeting with beneficiaries of the Sheway Vancouver pregnancy outreach program in the Downtown Eastside. Her sign said, "I love Will and Kate," before she decided to write her own name into the equation.

Participants in Sheway Vancouver's pregnancy outreach program (left to right) Janice Innes and baby Jordan, Cameo Hydrochuk and baby Jasmin, and Jordana Coleman and baby Hunter, speak with media after having tea with the Duke and Duchess of Cambridge. According to these moms, all of whom have overcome enormous obstacles in life, the royal couple were "cool," and "down-to-earth," and treated the women as though they were "neighbours." Their presence went a long way in breaking the stigma associated with addiction and mental illness, said Hydrochuk, whose baby was cuddled by Kate inside.

Prince William, Kate, Prime Minister Trudeau, his wife Sophie, and Vancouver Mayor Gregor Robertson join federal ministers at the Kitsilano Coast Guard Station, where the royals met members of Royal Canadian Marine Search and Rescue, the Canadian Coast Guard, and B.C. Ambulance. For many Vancouver residents, the use of the Kitsilano Coast Guard Station was controversial — the place was shuttered by the Harper government in 2013, and re-opened by Trudeau following a promise to strengthen and restore protection for Canada's waters. Despite this promise however, the prime minister is still debating the approval of a pipeline project whose oil tankers would litter the coastline, greatly increasing the risk of a catastrophic spill.

Dozens of armed guards, including local police, RCMP, and private security were in Vancouver for the day to lock down the sites where the Duke and Duchess of Cambridge, along with Prime Minister Justin Trudeau and his wife, Sophie Grégoire Trudeau, made their public appearances. This parade of officers on motorcycles appeared at the Kitsilano Coast Guard Station, whose property edges were lined hundreds of people hoping for a photo of the royal couple.

7. A ceremonial welcome from First Nations

Representatives from Vancouver's coastal First Nations welcome the Duke and Duchess of Cambridge into their traditional territory on Sunday at the Kitsilano Coast Guard Station in Vancouver. Squamish Chief Ian Campbell said he looked forward to repairing damaged relations between Indigenous peoples and the Crown, and enjoyed telling the royal couple about the spiritual connection his people have with the land and water.

8. The couples catch up

Sophie Grégoire Trudeau and Kate chit chat before greeting members of the general public at the Kitsilano Coast Guard Station. The two leading ladies were seen arm in arm with each other throughout the day.

9. All aboard the hovercraft

Prime Minister Justin Trudeau and his wife, Sophie, join the royals aboard a hovercraft at the Kitsilano Coast Guard Station. Many photographers lamented that the four of them never turned around and waved for an iconic, regal-public-appearance kind of photo, but the vessel was bound to a tight schedule and on its way to the Canadian Coast Guard Station Sea Island. It was the last public stop for the Duke and Duchess of Cambridge in Vancouver.

The Duke and Duchess of Cambridge — now out of sight from the public eye for the most part — share a quick laugh with Prime Minister Justin Trudeau aboard a hovercraft departing from the Kitsilano Coast Guard Station. It's impossible to tell from this angle what the trio were looking at, but so famous are the royals that some may spend hours trying to guess. Perhaps the conductor told a funny joke. We'll never know.

Duke and Duchess of Cambridge move their charm offensive to Vancouver