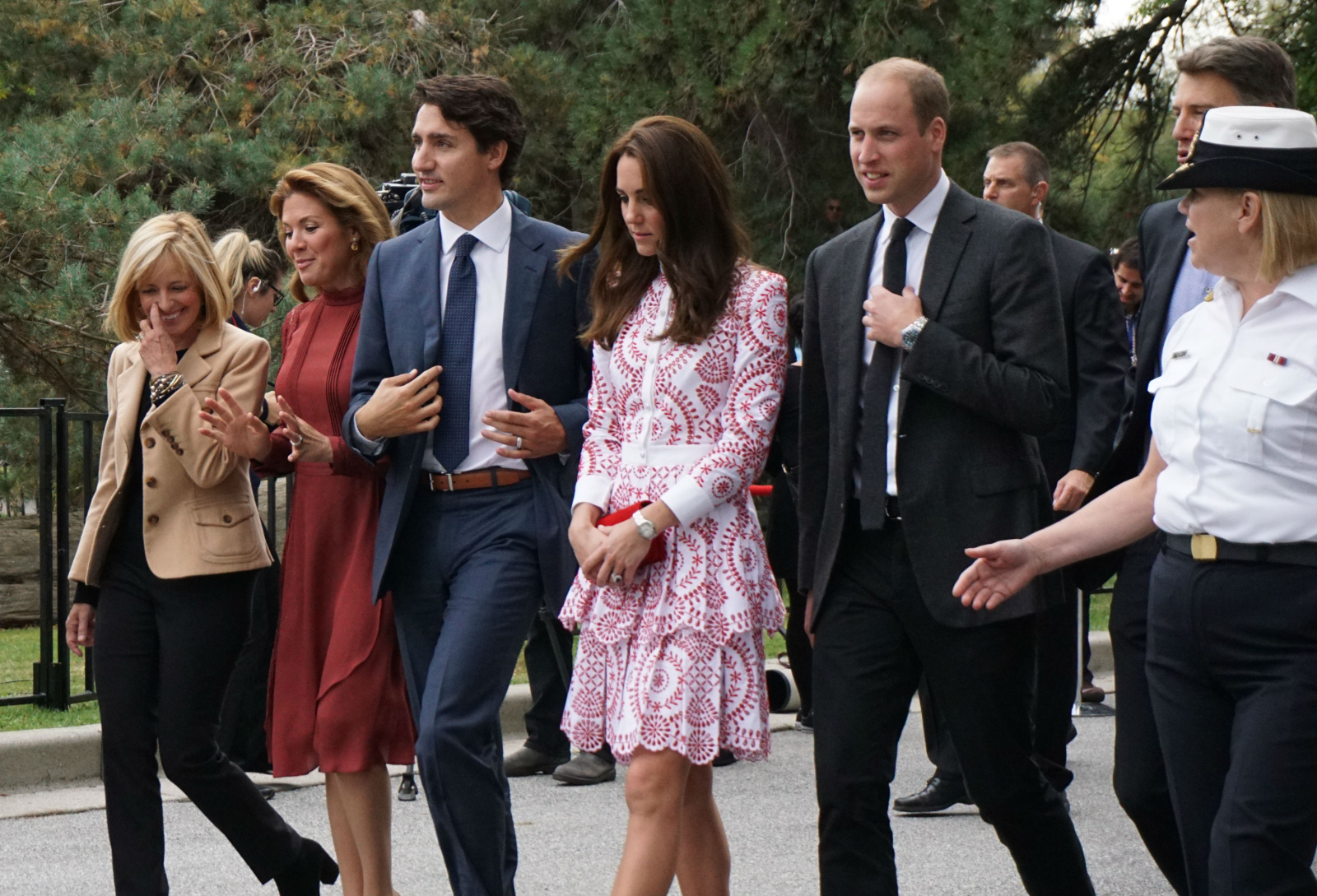 Prime Minister Justin Trudeau and his wife escort the Duke and Duchess of Cambridge to the Kitsilano Coast Guard Station in Vancouver, B.C. on Sun. Sept. 25, 2016. Photo by Elizabeth McSheffrey.
Previous story
Next story

Amidst hundreds of cameras, cheering fans, and security guards waiting to greet the Duke and Duchess of Cambridge at a coast guard station in Vancouver on Sunday, a lone blue banner of protest waved above the crowds.

"Stop Kinder Morgan," it read, referencing a major oilsands pipeline expansion proposal that, if approved by Canada's federal government later this year, would increase tanker traffic in Vancouver's waters by 600 per cent, increasing the risk of a catastrophic marine oil spill.

Kinder Morgan protesters hoped the presence of the royal couple would draw attention to their cause. And while Prince William and his wife, Kate, may not have grasped the significance of the blue banner as they shook hands with members of the adoring public, the message would have been clear to their Canadian escorts, Prime Minister Justin Trudeau, his wife, Sophie Grégoire Trudeau, and Vancouver Mayor Gregor Robertson.

"That the royals are here is actually excellent, because Trudeau is showing them the Kitsilano Coast Guard Station he re-opened after Harper closed it," said Sarah Beuhler, one of those holding the banner. "This coast is so beautiful, so him touring the coast [with the royals], remarking on its beauty, while simultaneously planning to put a pipeline and tanker project through that has a really good chance of just spoiling it, is something that should be highlighted."

The royal couple spent roughly half an hour at the coast guard station in total, speaking with members of Royal Canadian Marine Search and Rescue, the Canadian Coast Guard, and B.C. Ambulance. At his opening address at the legislature in Victoria on Saturday, Prince William emphasized that environmental issues would be one of his primary areas of focus during their tour of western and northern Canada.

Critics of Kinder Morgan's controversial Trans Mountain expansion project believe it will endanger critical marine and terrestrial ecosystems, and push Canada's climate targets far beyond reach. Its supporters, however, argue that the pipeline would revitalize provincial economies struggling from slumping oil prices, and provide much-needed jobs across the country.

If approved, the expansion would add 987 kilometres of brand new pipeline to triple the capacity a system that already transports 300,000 barrels of oil per day from Alberta to Vancouver and Washington. According to the Texas-based Kinder Morgan, Trans Mountain is prepared to respond "quickly with detailed emergency procedures and trained professionals" should a spill occur on land or water, and the company's emergency response plans are constantly being updated.

Mayor Gregor Robertson however, who has urged the federal government to reject the project, said the threat to B.C.'s coast certainly merits royal attention. He spoke with National Observer after Prince William, Kate, Trudeau, and his wife had boarded a hovercraft bound for the Canadian Coast Guard Station Sea Island.

"I think anyone who comes to Vancouver from afar can appreciate how unique and incredible this place is and how much we rely upon our ocean for our success and well-being," he explained. "It’s been great that [the royals] have spent a lot of time on float planes and hovercrafts seeing our precious coast up close.

"I'm hopeful this exposure continues to cement the case that we're going to stay as green as possible here."

First Nations welcome Will and Kate

The mayor's sentiments were echoed by Squamish Chief Ian Campbell, who greeted the royal couple upon their arrival in Vancouver earlier that morning. His nation is one of more than 15 Indigenous communities and 21 municipalities that vehemently oppose the Kinder Morgan pipeline, and he welcomed the opportunity to tell Will and Kate about the need to protect his people's cultural and economic resources.

"We welcomed the royal couple this morning and we talked about the beauty of this coast, the sacredness of these waters, and remembering that there's a spiritual context that First Nations bring to our relationship to the waters we've used for thousands of years," he said. "The relationship with the Crown in past has not been positive for us... we look to a brighter future that will involve First Nations and not just marginalize them."

While the royal couple have officially concluded their visit to Vancouver, they will continue their environmental tour of B.C. in the Great Bear Rainforest on Monday, and in Haida Gwaii on Tuesday. Keep checking National Observer for coverage.

Duke and Duchess of Cambridge move their charm offensive to Vancouver