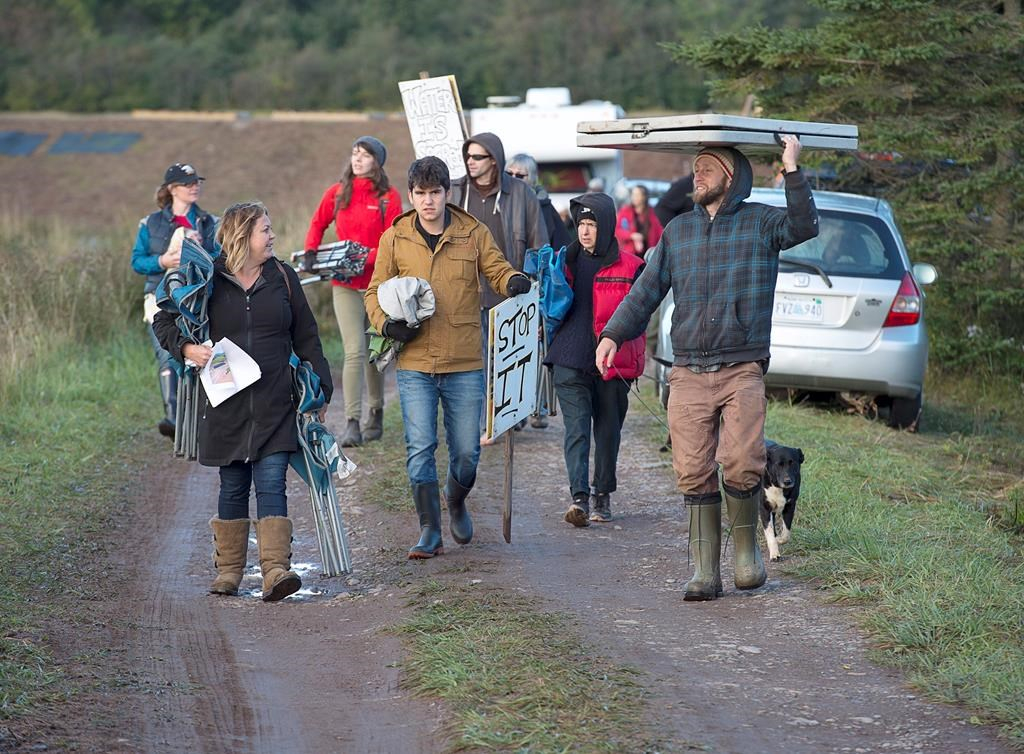 Mi'kmaq protesters are blocking access to a construction site near proposed natural gas storage caverns in Nova Scotia, saying the project threatens a tidal river that passes through their traditional lands.

About 20 people were gathered near the Alton project in Fort Ellis on Monday, close to a small island where the tidal Shubenacadie River meets a channel in which salt water is to be discharged.

An RCMP negotiator in plain clothes came to the site, but there was no visible police presence as the group erected a canopy, deck chairs and a table with a red blanket on it directly in front of the gate around 8 a.m. local time.

The natural gas storage project would pump water from the winding Shubenacadie river to the underground salt cavern site about 12 kilometres away, where it will be used to help empty the caverns.

The briny water that results would be pumped back into the river system.

The Mi'kmaq protesters, who have been joined by some local residents opposed to the project, say they're upset over the plan by AltaGas Ltd. (TSX:ALA), arguing it poses environmental risks to fisheries they have accessed for centuries.

"There is too many things wrong with this project."

As television crews filmed, she called Premier Stephen McNeil's office to ask for a meeting to discuss the Crown's responsibility to protect Mi'kmaq fishing rights in the area.

The natives also say they have a treaty right to be on a small island where the water is to be discharged.

The Mi'kmaq have set up teepee poles and flags on the island and eel traps along the island's banks, even though the site is behind the fenced off construction site belonging to Alton.

Maloney, who is also the president of the Nova Scotia Native Women's Association, says they will remain at the entrance of the riverside construction site indefinitely.

The company says the project has received all necessary environmental and industrial approvals for the storage project, following more than eight years of scientific monitoring of the tidal river.

Lori Maclean of AltaGas has said in previous news releases that the firm has continued to engage with the government, the Mi'kmaq of Nova Scotia, local residents and other stakeholders to answer questions about Alton and to address concerns.

She says that since 2006, Alton has been meeting with stakeholders including landowners, community members, government and the Mi'kmaq to share information and exchange viewpoints "in a respectful manner."

"The brine created by this process, a mixture of tidal water and the dissolved salt, will be released back into the river at a salinity level within the range of normal salinity for the river,'' Maclean wrote in a recent email.

Adidas Duramo 6 M Running Shoes
Get a automobile and then make your monthly payments punctually to further improve your credit history. Your credit rating will probably be examined once you obtain a car loan. However, if you develop an excellent score using a cheap auto, a few years later you might effortlessly make application for a new bank loan and obtain an improved vehicle.

Acquire some exercise time prior to starting selling your products or services. Question your friends or family to perform the part of your consumer and check out diverse methods. This should help you truly feel much less anxious if you need to talk to your first consumers and enable you to discover what pitch you is the most comfy for you.