By Jenny Uechi | News | October 11th 2016
#3 of 35 articles from the Special Report: Syrian Refugees in Canada 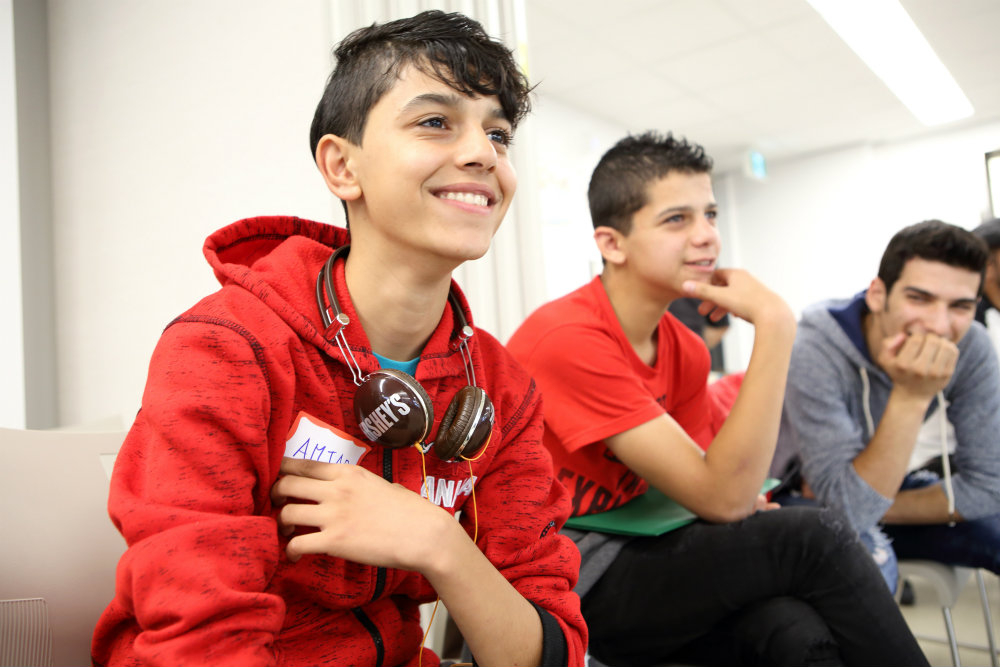 Please talk to us more, get to know refugees in Canada better and be our friends. That's the message from 19-year-old Syrian refugee Fadia Jouni, who arrived in Canada one year ago.

If Canadians reach out, Fadia said, they'll discover that they have a lot in common with the young people from Syria.

"We're not from the Stone Age!"

"We had pizza in Syria. We had computers. We weren't living in the Stone Age, you know?" she joked in English, to a burst of laughter from an audience in British Columbia.

The group of Syrian youth ranging from ages 15 to 22 were gathered at the new Immigrant Services Society of B.C. with Canadian stakeholders on a rainy Thursday evening. They presented the results of a discussion about refugees' experiences during their first eight months in Canada and they spoke about how things could be improved in the future.

Even as the meeting focused on troubleshooting difficulties, the young people constantly expressed appreciation to Canada for opening its doors to them in the first place.

Facilitators from Vancouver Foundation's Fresh Voices, a joint initiative of Vancouver Foundation and the BC Representative for Children and Youth helping young newcomers in B.C., were present at the meeting and led the discussion. Fadia was recently recruited to work with the organization.

In late September, 57 participants had come together — roughly one third of the Syrian youth that arrived between November 2015 and February — to ISSofBC for a full day consultation about the challenges they faced. Fresh Voices' Jorge Salazar and Nada Elmasry told the mostly Canadian audience that the consultation had been a success. It resulted in frank discussions. When the talking finished, everyone had danced.

During the consultation, participants responded to questions like: "What has worked well for you so far in Canada? What could be done better? How can things be better managed for future refugees coming here?"

The consultation brought forward illuminating responses that might help the next wave of refugees from Syria, who are due to arrive in November.

Last fall, the Trudeau government made a commitment to admit 25,000 Syrian refugees into Canada amid the deepening humanitarian crisis.

While every Syrian refugee went through rigorous vetting before arriving, the scale of the refugees coming to Canada was far larger than usual, leading to delays with some services.

Vancouver Foundation President Kevin McCort detailed his lifelong work with refugees around the world and expressed solidarity toward their struggles.

On their side, the Syrian refugees at the consultation expressed a strong desire to adjust to life in Canada and get back on track with their education and career aspirations. But many said the transition would be faster and smoother if they could get help in some areas.

Mohammad Suliman, 15, said many Syrian refugee youth spent months in limbo living at hotels, unable to go to English class or other courses because schools required students to have home addresses. In many cases, young people are waiting up to six months to attend English classes. This leads to restlessness and anxiety about falling behind in studies for some.

Video of Syrian refugees at ISSofBC building on October 6, 2016 by Jenny Uechi

Fadia said that things were especially difficult for 18-22 year olds, who are too old for high school but not yet ready to enter post-secondary schools.

When Fadia arrived she was 18 years old. There was no option for her to attend public school to improve her English. She would like to study psychology, but can't find a clear path to university here. Even those with university degrees from abroad have discovered their qualifications don't count for much in Canada. This is an issue also faced by other skilled immigrants arriving in Canada, who end up underemployed, working in fields outside of their area of expertise.

According to a recent study by the Conference Board of Canada, newcomers to Canada would be earning billions more per year if their foreign credentials were recognized in Canada.

Mohammad said his goal was to be an engineer.

"I want to be a pharmacist," said Noor Al Shhadeh, a 17-year-old girl sporting a maroon scarf and leather jacket.

"I want to go into journalism," Mariam Herro, 22, said with a smile.

Although the language barrier seems steep, the young people are quick to learn. Mohammad said that he arrived with a minimal English vocabulary, but that other students in school helped him. He practiced English, asking strangers directions on the street. He now understands English pretty well.

Nadeem Alrefai, 14, took the microphone to share that his principal had been helping him not only within school, but also adjusting to life in Canada outside of classes.

One of the interpreters at the event was Omar Al Jameel, who immigrated to Canada from Iraq. At 18, he arrived in Canada last year. He rapidly learned English and iss now fluently interpreting Arabic into English.

Many of the Syrians' issues aren't so different from challenges faced by other British Columbians, particularly in the Vancouver area. They struggle with access to affordable housing, and finding the money to pay for dental and health care. One youth said that even when families offered large sums for rent, landlords sometimes refused them because they didn't want too many children in the building.

According to ISSofBC Director of Settlement Services Chris Friesen, 10 staff are now working full-time to find housing options for Syrian refugees. Their job is to ensure that the new families don't have to resort to living in hotels for months, which can be stressful. But housing remains a major challenge.

One of the more subtle points discussed was around social inclusion and expectations for Syrian refugees. When asked if they were able to find close Canadian friends their age, all in the group shook their heads. Some shrugged the question off. Friendships are tricky for high school students, regardless of where they are, they said.

Fadia said she goes to a school for adult students and that it's hard to find common ground and create a social circle with people who are so much older than her.

"They (Canadian students) talk to us and help, but it's hard to make friends," Mohammad admitted. But he's made fast friends with other Syrian refugees and it's clear from the enthusiastic hugs, joking and laughter that this group of Syrian youth have forged strong, supportive bonds together.

Some observed that teachers have lower expectations of them than their Canadian peers in the classroom. They note subtle misunderstandings about their culture and Islam that makes it hard for them to feel accepted.

The students' experience isn't unique to Syrians in Canada. In a widely-circulated New York Times article called "The New Outsiders," refugee students discussed how they often found companionship with other young refugees and immigrants, but took years to connect with local-born students due to a gap in language, life experiences and culture.

The Syrian youth in the room all came stylishly dressed, some of them sporting fashion-forward haircuts and trend-conscious T-shirts. They were friendly and spoke openly about themselves. But still, adjusting to a new country and language isn't easy for young people.

"Some of these youth have been out of school for years because of the war," said Fresh Voices' Nada Elmasry. "So they already feel a lot of social anxiety about coming back into class." More efforts to understand refugees, their home culture and where they've come from would help, she suggested.

Some of the viewpoints that came out of the youth consultation were poignantly captured in an illustration, accompanied by colourful drawings:

"It's hard not to feel judged. I'm a safe, hard-working person!"

"I would feel connected if I had someone to talk about Canada about bullying and racism."

"We love Canada," said Mariam. "We want to learn from this country and benefit Canada."

"Islamophibia" is a ludicrous term now bandied about frequently to vilify those asking reasonable questions and to silence democratic discussion on the issues. And there are a lot of issues.

Migrants are expected to integrate into Canada, not demand Canada change for them. That includes abiding by our laws and leaving "cultural" traditions like fgm, "honor killings", oppression of women, abuse, etc, behind.

Past influxes of refugees received minimal to no support, learned the languages, did any work that paid the bills to begin with and through very hard work, made successful, comfortable lives. The current system puts everyone with a Syrian passport (without having to prove they are refugees or have even lived there for years) to the front of the queue, over refugees in other countries that applied over ten years ago and are still being murdered. This group has received more $$, furnishings, clothing, tech devices, every kind of support, better dental and medical than most Canadians, and has jumped every queue for housing, education, language, etc, including jobs. This campaign discriminates against all non-Syrian refugees as well as homeless and those in poverty. Waiting lists years long for subsidized housing were completely bypassed, some in apartments and living in motels were evicted to exploit the government money. Yet every article about this group (and there are so, so many) has complaints, "suggestions" and/or demands which makes expressions of gratitude feel quite the opposite. When expectations don't reflect reality you can either wallow in misery or suck it up and get on with things.

Go online and take the FREE language courses or get members of the community to teach free classes. If you want to make friends and integrate, stop making it about you and make it about helping others. Volunteer wherever you can and take in the culture of service with no expectations. Soup kitchens and homeless shelters always need volunteers and would offer perspective on true poverty.