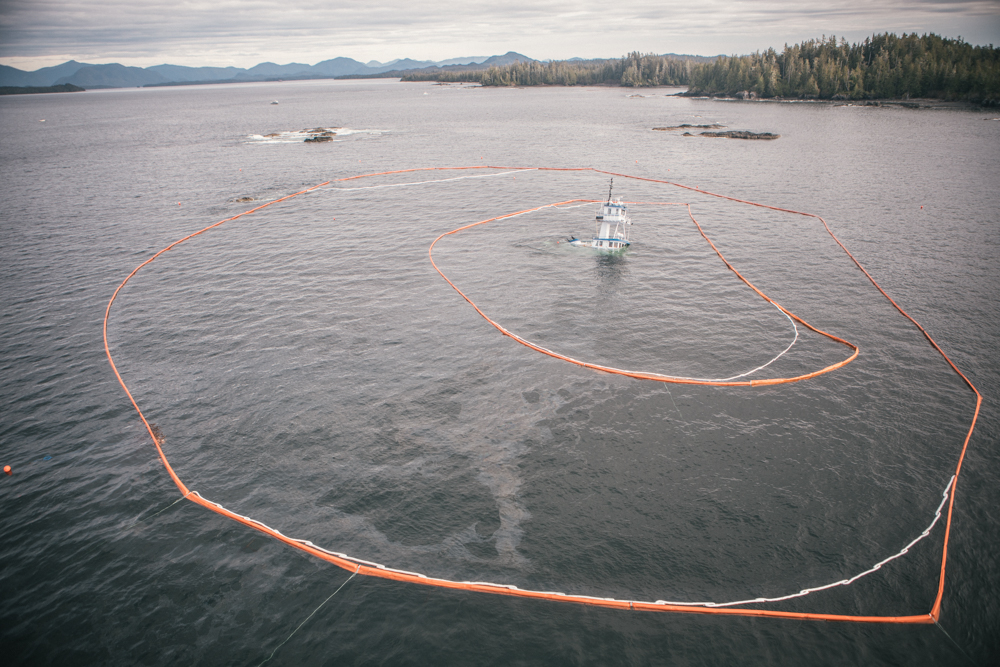 First responders use booms to contain a diesel spill in the Seaforth Channel near Bella Bella, B.C. in October 2016. Photo courtesy of the Canadian Coast Guard.
Previous story
Next story

First responders cleaning up a diesel spill in British Columbia's Great Bear Rainforest were given a "stand down" order on Wednesday for their own safety as severe storms pounded the waters where a tug and barge unit ran aground late last week.

Since Tuesday, the Seaforth Channel in northwestern B.C. has been blasted by rain and high wind speeds, hampering efforts to avert environmental disaster in the largest coastal temperate rainforest left on Earth. More than 88,000 litres of diesel have been cleaned up from the spill site so far, but according to the latest update from the American company responsible for the disaster, "weather conditions have exceeded small boat thresholds" and this has put a temporary stop to the clean up efforts

"Contingency plans have been developed to shelter vessels in case of deteriorating weather," said a report released by the Texas-based Kirby Corp. on Wednesday afternoon. "WCMRC (Western Canada Marine Response Corporation) vessels are fitted with air monitoring resources and will report any safety concerns."

Aerial images show that some fuel has escaped the containment efforts of booms and skimming vessels. While the empty barge has been moved to a safe anchorage, the company's tug remains partially sunk in the waters of the nearby Heiltsuk First Nation.

First responders decided Tuesday not to weigh down the tug in preparation for the storms, as none of the crews on scene had sufficient anchors or blocks to stop it from moving in the severe weather. Kirby did not respond to National Observer's requests in time to comment on whether this could result in the tug moving and causing additional damage overnight.

Members of the Heiltsuk First Nation, in the meantime, have labelled the response efforts as "poorly coordinated" and "nightmarish," and on Wednesday, elected councillor Jess Housty said the entire spill was "sickening." More than 60 per cent of the nation's harvesting clam beds have already been destroyed, she explained, and the impact on salmon, kelp and herring in the months to come could be severe.

"It’s very clear from the air that the wider spill is nowhere close to contained,” Housty said in a press release. “This incident should demonstrate clearly not just that we deserve greater recognition of our authority and our capacity, but that it would be wise for other levels of government to invest in our local community and our ability to care for this place.”

The Heiltsuk First Nation's press release also sought to correct recent press coverage indicating that Kirby had compensated the community for losses adding up to $100,000. The community has not yet received any cash from the American operator. Instead, it has set up a crowdfunding campaign, and is considering legal action against both Kirby and the Canadian government.

It will be requesting compensation from Kirby for operating expenses related to their response efforts including food, fuel, additional staff hours, and boats charters, and the impact on its upcoming harvest.

Representatives from both Coastal First Nations and the Raincoast Conservation Foundation (RCF) are on site in Bella Bella, B.C. offering support to the Heiltsuk First Nation in grappling with the diesel disaster. Both joined Housty in calling for a stronger integrated response system for spills along the B.C. coast.

“We are all victims of government oil spill response rhetoric, but the brunt of the consequences fall on local communities and wildlife,” said Misty MacDuffee, wild salmon program coordinator for RCF in a Wednesday statement. “Right now, BC seems to be planning for world class oil spills by facilitating the introduction of greater threats, when they need to bring existing vessel safety and spill response capacity up to much higher standard.”

As the storm continues, large boats on the scene are expected to continue their continue their clean up tasks, including hot tapping, but first responders will be continuously monitoring the weather, according to Kirby. The company's incident report said that operations may be suspended overnight, and the barge bringing supplies for the response may need to be relocated.

This story illustrates for me

This story illustrates for me the madness of increasing fossil fuel export through these waters. We've been lied to repeatedly by all levels of government regarding their 'state of the art' cleanup plans. Sounds like these plans are one more example of neo-liberal privateer schemes.

Great Plans guys.....but it might be nice to actually have the capacity to do on the ground, what you so glibly tell us exists in your propagandist press releases. I'll say it again: There might be ways to extract, refine and ship bitumen and LNG safely, but the suits in charge of fossil fuel companies now, won't be implementing them.

And the reasons for that are blatantly simple: The up the rhetoric, and bank the money. As I write, they are plotting how to rake back any carbon tax money the government might collect, but pay the price of Clean up technology on the ground??? Anyone dreaming of that, doesn't understand the reality of oil and gas profit margins.....or the history of off sourcing costs onto the earth.

Unless we stop them, sacrifice zones are going to proliferate in the years ahead......exacerbated by the new intensities of weather events along all of these export routes. They'll talk state of the art technology, monitoring from space, and world class cleanup strategies. Talk is cheap.

I agree.
In my lifetime as 3rd generation Islander=
YOU try fly-over central Vancouver Island( by which I mean the central long strip North down to South( Victoria) or drive throughout the logging roads( Do NOT Try!! ) across it.
You will be absolutely STUNNED at the desolation, if you can make it out.
As per the Coastal garbage starting to appear in public, they planned it this way the whole time.
My Mother lost her Property because of these jerks, and so will ALL other landowners along the Coast of BC.
I feel bad for the Squamish , BC, new owners, unless they read this ,or other info sites=
gutted for what? half a million? I'd invest in those young newbies= carbon catcher techies= and it works. Right on your doorstep. Hopefully at time on my Comment= they haven't already sold out to Japan or China.
The young techies that have invented the water everything saved= THEY are the ones you all need to kiss butt & say Thank You Dearie.
As to whales in the sound= I love them, they love me.
We are connected, they are FREE.