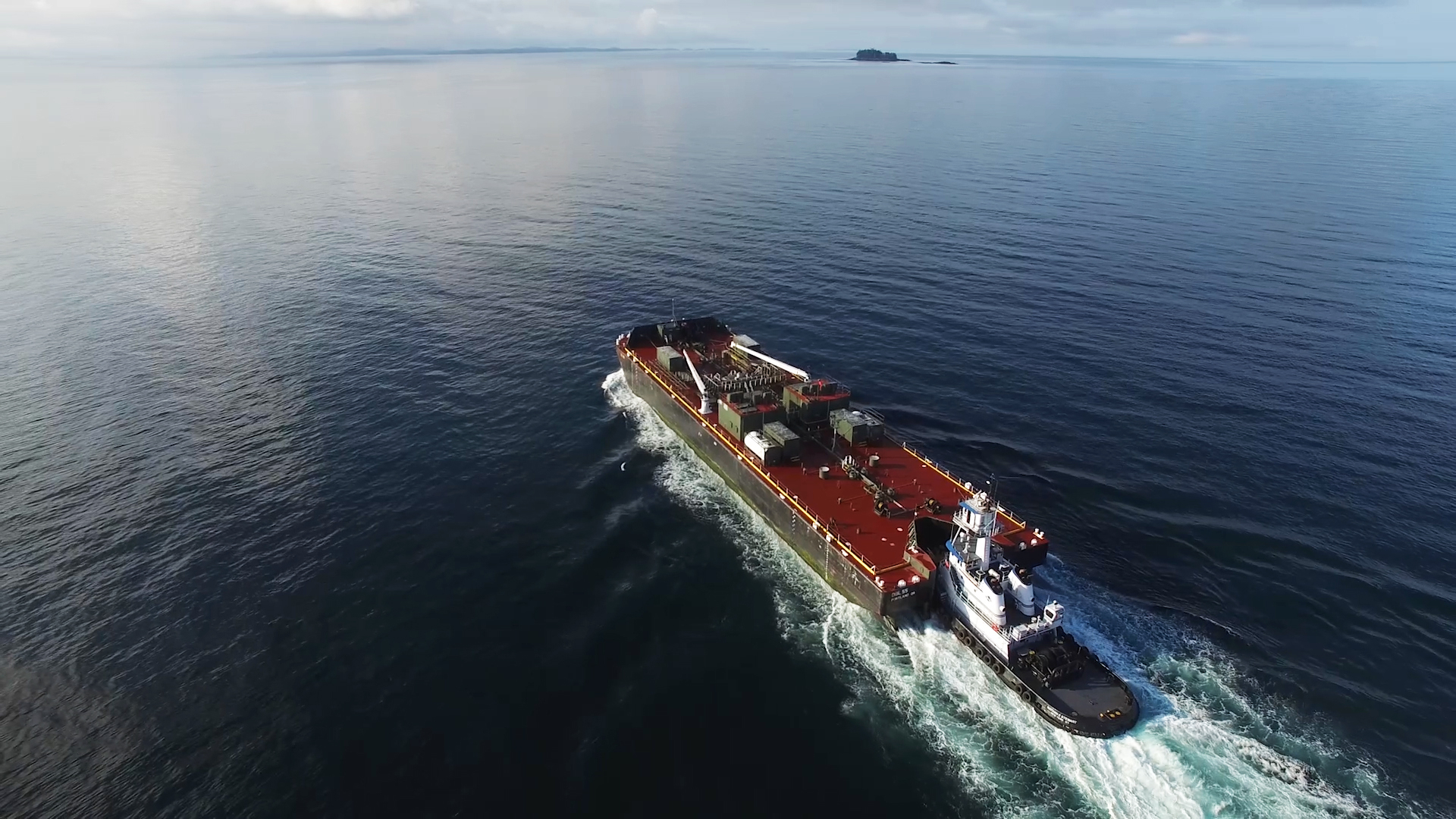 First responders are working quickly to contain a diesel spill in British Columbia's Great Bear Rainforest after a 10,000-tonne tanker barge and tug unit ran aground on the central Pacific coast around 1 a.m. on Thursday morning.

According to the region's Joint Rescue Co-ordination Centre, the Nathan E. Stewart tug boat was hauling an empty fuel barge through the Seaforth Channel when both vessels crashed into Edge Reef near Athlone Island. The tug's seven-member crew was on board at the time of the accident, but no injuries have been reported so far and all have been safely evacuated.

Members of the Heiltsuk First Nation, who live in the community of Bella Bella near the crash site, immediately linked the accident to concerns about new pipeline projects and the current Liberal government's promise to implement a ban on tanker traffic on B.C.'s northern coast. They reported that the tug boat started to sink around 10 a.m., leaking thousands of litres of fuel into the Pacific Ocean.

“Though we are thankful that the barge was empty, we are gravely concerned about the potential ramifications of the fuel spill from the tug," said Heiltsuk Chief Marilyn Slett in a press statement.

"Our Gitga’at neighbours to the north are still unable to harvest clams and other seafoods ten years after the sinking of the Queen of the North. This spill area is in one of our primary breadbaskets, and we know that diesel is extremely difficult to recover."

Heiltsuk vessels have been on site since early Thursday to assess environmental impacts and assist three Canadian Coast Guard vessels with spill response. The barge that crashed is owned by Texas-based operator, Kirby Corporation, which confirmed that roughly 50,000 gallons of diesel — 189,000 litres — were on board its tug boat at the start of its journey.

In a press statement, it said various response vessels, work boats, booms, and oil skimmers have been deployed to the scene, and spill response is ongoing:

"Resources to meet a worst possible discharge have been activated and are either on scene or on route," said Jim Guidry, Kirby’s incident commander. "A priority for the response will be developing a plan to remove all diesel aboard the tug and to safely salvage the vessel...

"Kirby Offshore Marine, owners and managers of the Nathan E. Stewart regret that this incident has occurred and are working to respond and mitigate the impact of this incident.”

Despite the company's promise to contain the damage, members of the Heiltsuk First Nation are concerned that fuel leaked from the spill could have a lasting impact on their marine income-generating activities. According to a Thursday press statement, the accident threatens an area where 25 species are harvested, including manila clam beds that generate roughly $150,000 per year in local income.

With the changing winds and tide, said the nation's Integrated Resource Management director Kelly Brown, there is concern that the spilled fuel will be pushed towards other important harvesting areas for herring roe, seaweed, and clams.

“It’s really bad out here. A lot of fuel is on the beach already, and fuel is in the water,” he explained. “The initial spill response has been totally inadequate.

"The first responding vessels were not equipped to deal with a spill, and had to return to town to gather more gear. The Heiltsuk are providing our own equipment because what responders have been able to provide so far is insufficient.”

The Trudeau government promised to implement a moratorium on tankers in November, when the newly-elected prime minister ordered Transport Minister Marc Garneau to formalize a crude oil tanker ban on B.C.'s northern coast. So far, federal representatives have refused to provide any details on the upcoming legislation, and Garneau's office could not be reached for comment late on Thursday afternoon.

Slett however, said the ban could not come quickly enough.

“This is a stirring reminder that the north coast oil tanker moratorium cannot be legislated fast enough," she said. "We must take note, however, that tanker barges like this might not even be included in the ban. The ban needs to be complete, and spill response must be improved."

According to the Heiltsuk, fuel continues to leak into local waters, and containment efforts are still underway.

The Transportation Safety Board of Canada, which investigates and responds to transportation accidents across the country, said it is aware of the accident and in contact with first responders on the scene, including RCMP, the Canadian Coast Guard, Transport Canada, and the U.S. Coast Guard. No formal investigation has been launched to date, but spokesperson Chris Krepski said the board isn't ruling anything out:

“Right now we’re just gathering information on it," he told National Observer. "We’re aware that the cleanup is ongoing. We’ll assess the information we have and decide what our next steps will be.”

In a statement sent on Friday, Transport Canada said it learned about the accident on Thursday morning, noting that the tug, Nathan E Stewart, is a US flagged vessel and that the US Coast Guard had been informed. It also said that the barge was a fuel barge that is empty.

"The Canadian Coast Guard is the lead federal agency and is working closely with the Western Canada Marine Response Corporation and a salvage company contracted by the owner," the Transport Department told National Observer in a statement. "Transport Canada has dispatched technical expertise to support the response activities, and will conduct a compliance and enforcement inspection pursuant to the Canada Shipping Act, 2001 once the emergency is stable and will not hesitate to take appropriate action."

I'm wondering if all this

I'm wondering if all this adoration has boggled Trudeau's mind. He seems to have forgotten his pledge to First Nations regarding pipelines, he obviously is very confused re the Paris agreement on climate change by saying one thing whilst he was there, and another once he was home - he can't have it both ways! And today when he first heard of this mess he should have been outraged - publicly made it priority one to get cleaned up, and then immediately commenced a moratorium on tankers! (actually I thought he already had done that,) - but giving him the benefit of the doubt here. IMO, he has already BETRAYED indigenous people and the Canadians that stand with them, regarding education funding, Treaty 8, a clean water initiative he spoke about for the reserves that need it, Site C, etc etc.

Last March, I attended a

Last March, I attended a Transport Canada (TC) meeting in Vancouver called to receive suggestions aimed at improving marine safety on the Pacific coast. In that meeting, which was chaired by Joyce Henry, Director General of Marine Policy at TC, I raised the issue of the Nathan E Stewart, and questioned the exemption granted by the Pacific Pilotage Authority to Kirby to self-regulate the competence of "pilots" aboard the tug/barge combo that is the Nathan E Stewart. I also suggested that the loophole in the Canada Shipping Act be fixed so that these "combo" vessels could not skirt the oil tanker moratorium on the Inside Passage and put that sensitive ecosystem at uncalled-for risk. Especially with a craft of such iffy navigability.
To my knowledge, TC took no action on the matter, despite the almost 1-year since TC Minister Garneau received his mandate letter from the PM instructing him to enact a ban on oil tankers traversing the North Coast area. Which the Nathan E Stewart did every couple of weeks, loaded with 10,000 tonnes of diesel bound for Anchorage via the Inside Passage.
Now this.
Dereliction of duty isn't too strong a term for this level of carelessness.

Why was the tanker going at

Why was the tanker going at 1am Thursday morning? Is that normal? Seems like during the night/early morning should be anchored somewhere?