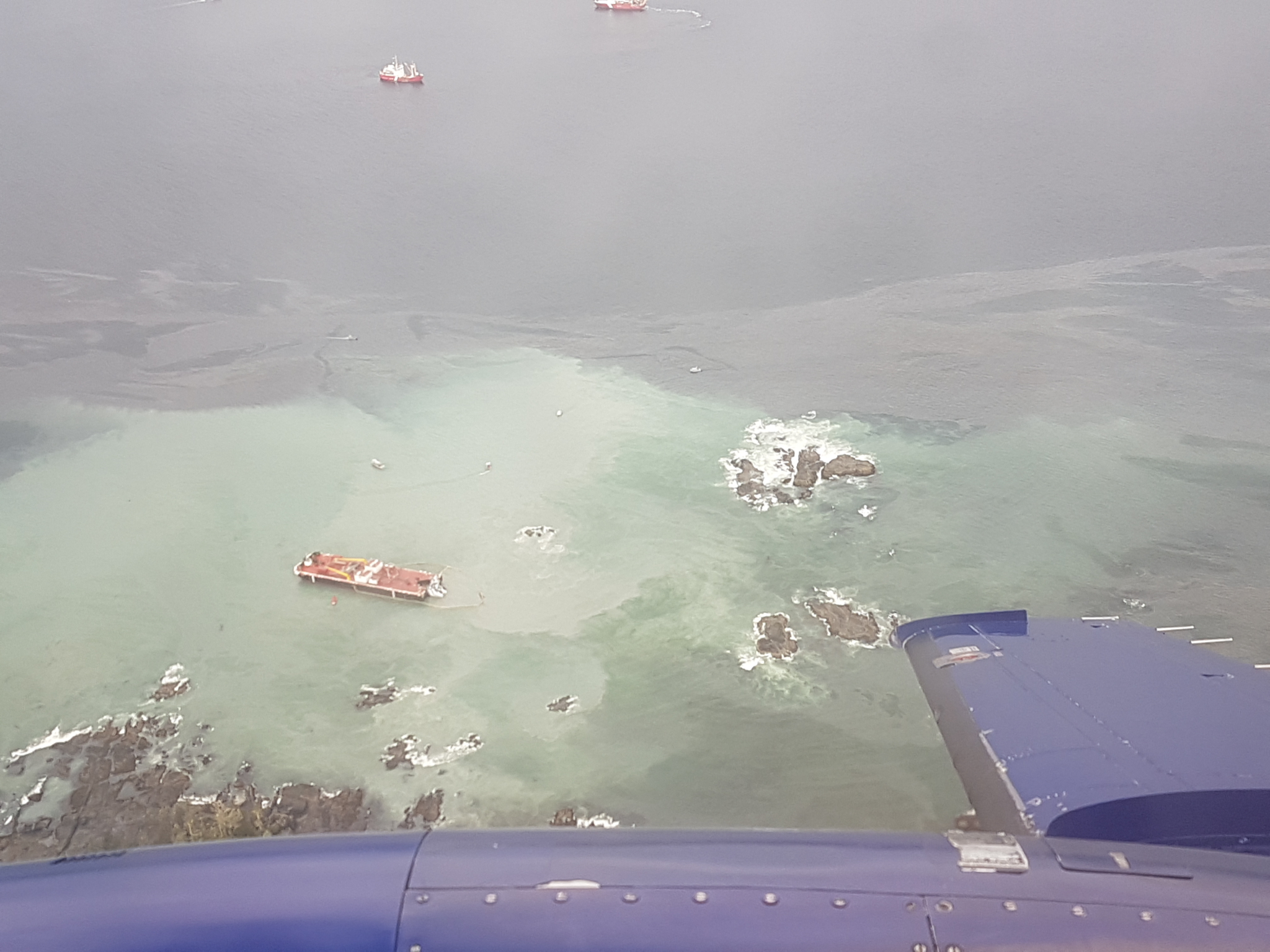 An aerial shot showcases the containment efforts of first responders to a diesel spill near Bella Bella, B.C. in October 2016. Photo courtesy of the Canadian Coast Guard.
Previous story
Next story

Clean up of a major diesel spill of British Columbia's west coast has taken a turn for the worse after a response boat took on water and started sinking, prompting a new investigation by the Canadian Coast guard.

The incident temporarily interfered with clean up efforts of a spill that, according to the local Heiltsuk First Nation, has already destroyed more than half of their clam beds in the coastal waters of B.C.'s Great Bear Rainforest.

An incident report released Thursday by Kirby Corp., the Texas-based company whose tug and barge unit released up to 200,000 litres of fuel into Great Bear Rainforest waters last week, confirmed that a "safety incident" had taken place. In an interview, Kirby communications official Michelle Ward said that as the skiff started to sink around 2 p.m. on Wednesday afternoon, the crew member stepped off onto a nearby barge.

"Then efforts were made to pump water out of the skiff and the skiff was then removed from the water and put onto the barge, so it didn’t sink to the bottom of the channel," she explained.

Ward couldn't confirm the reason the skiff started taking on water in the first place, but Chief Marilyn Slett of the Heiltsuk First Nation, said that the individual had recently arrived from Alaska, hopped into the boat without adequate safety gear, and did not realize that one of the tanks on the boat was full of water. When he turned the throttle on near the site where the Nathan E. Stewart and its empty fuel barge ran aground on Oct. 13, she said the bow of the boat went up and the stern started to go down.

In a tweet, she expressed relief that no one was injured.

More than 88,000 litres of diesel fuel have already been cleaned up from the accident, but the Thursday morning incident report confirmed the spill has not been fully contained. While hot tapping (the process of removing residual oil from the tanks of sunken vessels) continued overnight Wednesday, small vessel clean up efforts were suspended as a result of stormy weather.

The Texas-based company confirmed that full response efforts resumed early on Thursday and divers entered the wreck of the partially-sunken tug to continue pumping out the fuel. The damaged barge is currently on its way to Vancouver.

For the first time since the 10,000-tonne tug and barge unit ran aground, wildlife has been spotted near the spill site. Chief Slett confirmed that community members of the nearby town of Bella Bella have seen oiled birds in the territory and are working with the other spill responders to collect more information.

Ward of Kirby confirmed that an oiled cormorant has been reported, but could not be captured at the time of its sighting.

On Thursday afternoon, an incident report from Kirby indicated that for the second day in a row, small vessel clean up crews were issued a "stand down" order as a result of dangerous and stormy weather. Sampling, wildlife surveying, and shoreline assessment were put on pause until further notice as more than 20 litres of diesel continues to float freely on the water.

More than 230 bags of solid waste have been collected from the incident, but company still does not have an updated estimate of how much fuel has been cleaned from the spill site. Its report however, recognized that the current clean up equipment is not sufficient.

The Heiltsuk First Nation, along with Indigenous allies and environmentalists, have condemned what they label as a "nightmarish" and "poorly co-ordinated" response. On Thursday, a coalition on conservation organizations called on Prime Minister Trudeau to implement his promised tanker ban as soon as possible, and assume responsibility for a sloppy spill response that practically saw one individual sink his own boat.

“There is nothing ‘world-class’ or effective about spill response that takes 20 hours to arrive," said Sierra Club BC’s campaigns director Caitlyn Vernon in a press statement. "It’s not enough to talk about protecting the coast, when is this government going to stand by their word and legislate a strong tanker ban?”

Editor's Note: This story was updated at 3:50 p.m. Pacific Time on Thus. Oct. 20 to include an updated incident report from Kirby and statements from Greenpeace and Sierra Club BC.

This whole episode is

This whole episode is evidence of BC & Federal avoidance
of "Make the Destroyers Pay". Why do you think the PRESIDENT OF THE USA
flew to Alaska then had meeting with "Christie Clark Government of BC" regarding the NEW Mine built by the old mine, that just--- What WAS that WHO song?
She STILL hasn't made the company pay for clean-up of 100's of miles of damages,
in my opinion & as far as ability to gather info goes. HAHA in BC.

Gonzo environmental policies do nothing but FAIL as soon as the diesel hits the water and this spill is but a preview of our future if any of these mega projects are allowed to go ahead. Meanwhile, our government just can't approve climate destroying projects or sign corporate takeover treaties like TPP fast enough and having overdosed on the power, they want to stop electoral reform. Wow. Sunny Days? No, just the opposite.

Nike Schoenen Grijs Met Roze
An incredible hint to not forget if you love preparing gourmet coffee is to actually clean your house devices from time to time. In the event you don't clear your caffeine container often, it won't take very long to the debris to formulate and you'll soon begin to recognize an incredibly bitter taste with the caffeine.

Utilizing fake customer feedback is not a good idea while making use of internet marketing. It might seem like a good idea back then, but when folks find on and they will find on, you may not be seen as a trustworthy business. Anticipate to demonstrate that all your testimonials, come from genuine human beings, that have utilized your products or services.