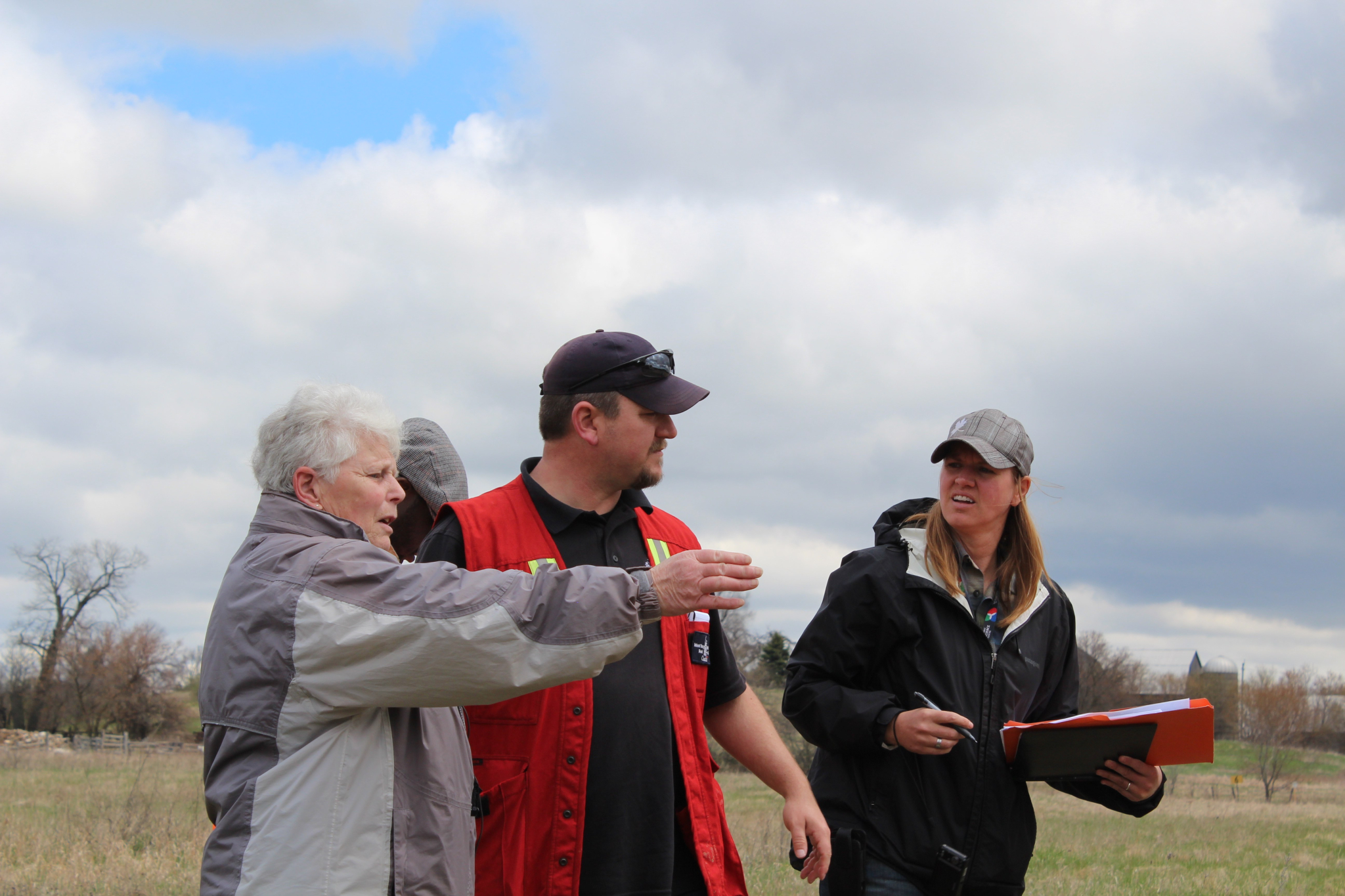 Landowner Brenda Free chats on her property with National Energy Board environmental specialists Luc Rainville and Heather Adams during an inspection in Grafton, Ont. on May 6, 2016. File photo by Celeste Côté.
Previous story
Next story

An aging pipeline plagued with safety problems and leaks continues to operate near Canada’s largest cities, despite repeated violations and serious warnings from two high-ranking officials at the federal energy regulator that it should be shut down and repaired.

The regulator, Canada’s National Energy Board, found that the major Ontario and Quebec pipeline was a threat to public safety after a “number of pipeline releases and overpressure incidents” that prompted it to respond with three separate safety orders in 2009 and 2010.

After the problems continued to escalate, the NEB issued a new safety order on Sept. 20, 2016 that allowed the operator, Trans-Northern Pipeline Inc., to keep its line in service near the homes of millions of Canadians while reducing its operating pressure by 10 per cent. The NEB also imposed a set of conditions requiring the company to conduct additional inspections, engineering assessments and improve its safety practices.

Pipeline links to Pearson and Trudeau airports in Toronto and Montreal

The pipeline carries up to 172,900 barrels of refined fuel products every day connecting to major airports such as Toronto’s Pearson International Airport and Montreal’s Trudeau airport. It also connects to the Ottawa region and the reduced pressure order has already been linked to gasoline shortages and higher prices at the pumps in Ontario and Quebec during the recent Thanksgiving long weekend.

Two members of the Board protested the decision to keep the pipeline running, slamming the Richmond Hill, Ontario-based operator for breaking rules and putting public safety at risk.

The Board members, James Ballem, a former provincial cabinet minister from PEI and Mike Richmond, a Toronto lawyer who is from Montreal, said they believed the decision to allow it to continue operating was a bad idea, recommending a temporary shut down until the company cleans up its act.

“TNPI has had six years to comply with numerous Safety Orders issued by the Board, but they have failed to fully comply,” wrote Ballem and Richmond in a dissenting opinion that was attached to the NEB decision from Sept. 20. “We are not confident that yet another similar Safety Order will guarantee that the changes necessary to make the pipeline as safe as possible will actually be made this time.”

Reached by phone on Monday morning, Trans-Northern’s manager of regulatory and external affairs Gail Sharko asked National Observer to email questions, but then did not immediately respond with any new information on the company’s progress in responding to the safety order.

Ballem and Richmond slammed the operator for violating federal rules.

“We agree with the Majority that if and when all of the measures described in the Amending Safety Order are implemented, the pipeline system will be as safe as possible. However, until those safety measures are fully implemented, it would have been our preference to have the pipeline system shut down in the interim because TNPI’s current operational controls do not meet the requirements of the National Energy Board Onshore Pipeline Regulations or CSA Z662-15.”

(CSA Z662-15 is the latest edition of the Canadian Standards Association safety code for pipeline operators. The code describes all of the technical rules that pipelines companies must follow in Canada in order to meet government rules and legislation. The safety code is approved by a committee made up primarily of industry engineers and executives.)

Landowners who live near the Trans-Northern line, say this is yet another example that demonstrates that Canada’s NEB is a weak federal regulator that treats oil companies like customers instead of forcing them to follow safety rules. They noted that the pattern was also reflected in National Observer's recent investigation into the emergency safety order over substandard parts.

“There are a number of examples like this that are accumulating,” said Lorraine Caron, a former spokeswoman for a Quebec advocacy group, Citizens au Courants, who lives in a suburb, west of Montreal, a few kilometres away from the Trans-Northern pipeline route.

In late June, Caron and some of her neighbours discovered that pieces of the Trans-Northern pipeline had started sticking out of the ground near a stream, about five kilometres away from the Ottawa River. After they went public with their concerns, the NEB announced on Twitter that it was sending inspectors.

The regulator later said that temporary measures taken were adequately protecting the environment around the Trans-Northern pipeline.

But a few hundred kilometres away, near Grafton, Ontario a rural community East of Toronto, two landowners speculated that there might be political pressure to keep the pipeline running because any shutdown could cause significant disruptions for its oil industry owners and for consumers.

Landowners: Why don't they shut this rotten pipeline down?

Bev Dahmer and Brenda Free own and operate a farm on land that is used by several pipeline operators. The two landowners have had a series of problems after some excavation work by Enbridge Inc. — Canada’s largest pipeline company — in 2012 that uncovered gasoline contamination. This prompted a series of investigations, without any resolution. The contamination occurred east of their property on a neighbour's land and was traced back to a spill from the Trans-Northern pipeline in 1962, they said.

“They (the NEB officlals) are handling it very poorly,” said Dahmer in an interview. “Basically the NEB hasn't been following up with us as to what has been happening.”

She also said that Trans-Northern hasn’t been responding to concerns of local landowners and is “dancing around every safety order” while the NEB is failing to enforce the rules.

“I’m not really sure why they’re reluctant to shut this rotten pipeline down,” Dahmer said. “I believe that Trans-Northern is doing everything in their power to shirk their responsibility.”

The three companies that own the pipeline operator — Imperial Oil, Shell Canada, and Suncor — declined to provide details about whether they had any interactions with the NEB over Trans-Northern.

“Imperial is both a customer and a shareholder in Trans-Northern Pipelines Inc. and we are engaged directly with TNPI regarding their response to the NEB order,” said Imperial Oil spokeswoman Killeen Kelly.

Shell Canada and Suncor also both referred National Observer to Trans-Northern for responses to questions.

The NEB did not immediately respond to questions asking whether economic considerations factored into its decision not to shut down the pipeline.

Kudos to Mike and the NA for

Kudos to Mike and the NA for exposing the continuing charade of the captive regulator and our equally captive government. Thank you for the diligent work and thoughtful articles.

Some more typical examples of

Some more typical examples of a captured regulator giving free reign to pipeline companies to destroy the environment and disrespect landowners' property rights.
Without the National Observer and Mike De Souza publishing these stories, our suspicions and speculations would go unproven. Our cynicism and disbelief have been validated.
The pipeline companies and the NEB are not being made accountable. Minister Carr is just another industry puppet legitimizing the NEB and its (in)actions.
If you want to keep reading stories like these, exposing "dirty little secrets" the government, the NEB, and the pipeline companies DON'T want you to know, SUBSCRIBE NOW to the National Observer.

Hi Public Interest,
Thank you for this vote of confidence. Mike is a rock star reporter, and working so hard overtime to get these stories out to readers like you. It means a lot to me to hear how much you value the work.
Linda, Editor-in-Chief, National Observer

It is extremely worrying that

It is extremely worrying that the government of Canada seems to allow these things to escalate so much. Having worked for a pipeline company many years ago, I am familiar with the attitudes of them towards pipeline ruptures and decay. They often are treated as events that should be literally covered up...as in the quick fix to dump gravel over the exposed pipeline in Ontario shown in the article. It is unlikely that the line will survive very much longer and will decay to the point where it becomes impossible to repair and will have to be replaced. There will be more leakage and disaster before that happens though. If only the Feds would show some gumption and political will beyond a positively worded press conference. If indeed they do have a plan for these events, and the west coast spillage problems with tankers too, then they should communicate it to the people of Canada and not become distant patriarchs who dare not be questioned. We have had that kind of government for too long now and we require that they treat the country with more respect than that.

Three blind mice, see how they run ... Perhaps deaf and blind more adequately describes the NEB, the government agency responsible for regulating pipelines. If you work under my jurisdiction, and I ask you to make some changes, improvements within 6 months and you don't, I am going to shut you down. This is a basic, reasonable business assumption. So how is it that Trans National still operates this pipeline after ignoring NEB demands for years and years? Can you smell Harper? Thanks to Mike de Souza again and again and again ..

The NEB is a sham.

The NEB is a sham.

The regulator, Canada’s National Energy Board, is negligent in their duties to protect the public and environment. This old line has to be totally replaced, but it is in such a deteriorated condition it is dangerous to have heavy excavation equipment crossing over it. A new line would have to be installed adjacent to it with the utmost care to not apply pressure to the aged line.

The bias of the NEB cozied up to pipeline operators and owners is a disgrace. If there was a line burst with a fiery explosion how many kilometres of pipeline would rupture? How long would it take to shut off the flow of highly explosive liquid fuels which would flood out into populated areas and flow down waterways?

Prime Minister Trudeau it is time to have all the members of the NEB recuse themselves for gross negligence of the highest order. A revoking of their pension plans would also be in order as punishment.

Despite the dissent of 2 NEB

Despite the dissent of 2 NEB Board members to allow TNPI to continue operating its pipeline between Ontario and Quebec due to SAFETY CONCERNS, the NEB now again attempts to assure all Canadians that, "The NEB would not allow operation of a pipeline unless it was safe."

This is an excerpt of the NEB's reply to Le Devoir's recent article describing over 60 repairs on Enbridge's Line 9B after the reversal of this aged, cracked and corroded pipeline was approved by the NEB.
Le Devoir Article
http://www.microsofttranslator.com/bv.aspx?from=fr&to=en&a=http://www.le...

Yet on August 14, 2014, Enbridge filed a letter with the NEB describing at least 162 digs that Enbridge had earlier planned and filed with the NEB on Line 9B, but were now (August 2014) CANCELLING,, telling the NEB that they were UNNECESSARY.

For Enbridge to now (2016) perform digs on Line 9B which they previously had declared to the NEB in 2014 as unnecessary, validates the very poor condition of this delapidated, corroded, dented, cracked, and disintegrating pipeline, which the NEB contends is safe.

Enbridge said Line 6B in Marshall (Kalamazoo) Michigan was safe.
History, unfortunately, may repeat itself on Line 9B.
But Line 9B is safe, the NEB assures us.