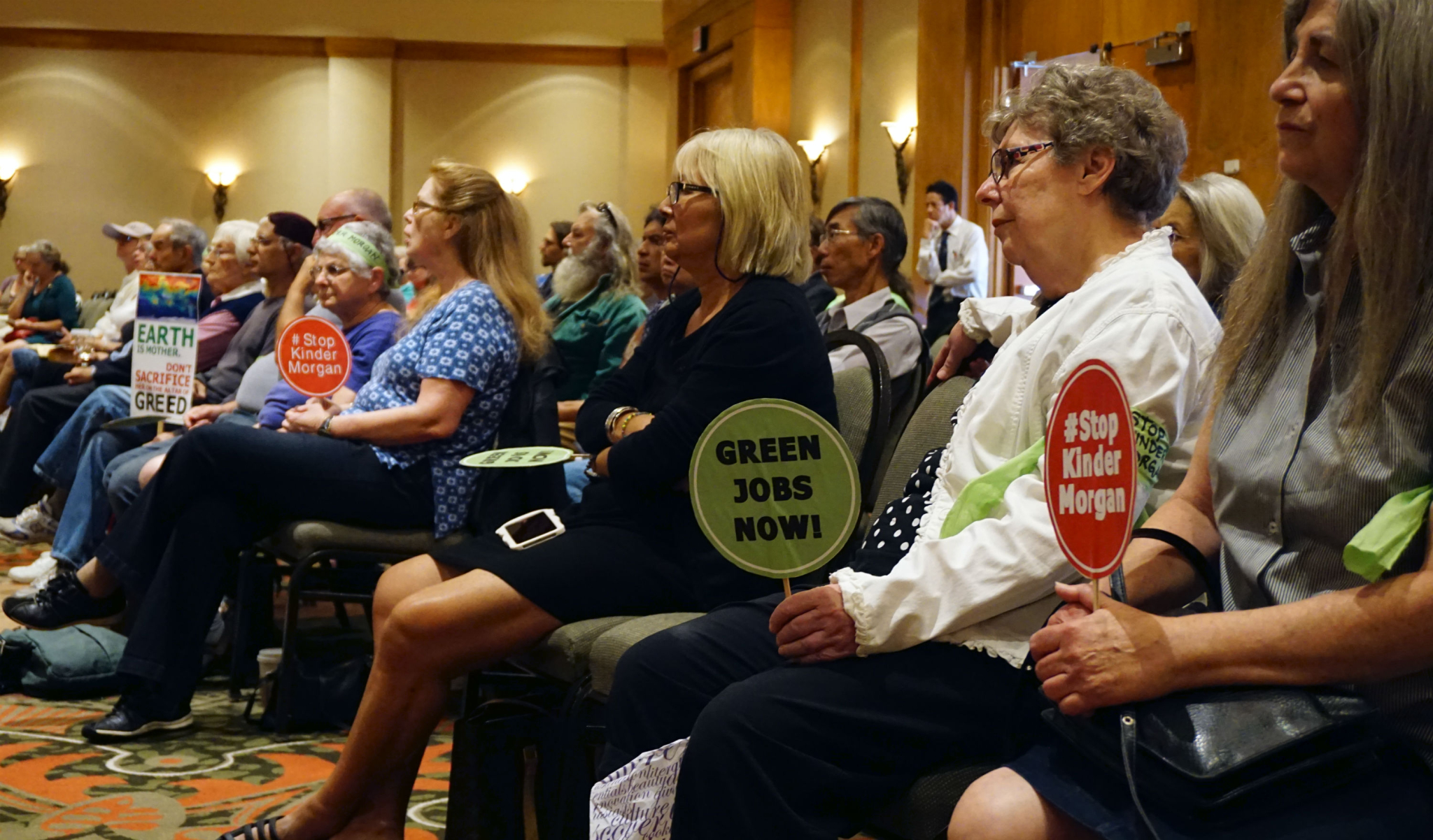 Albertans are impatient, British Columbians are scared, the federal government failed to adequately consult First Nations, and Canada’s national energy regulator recommended approval of a major west coast pipeline without enough evidence that it was in the public interest.

Those are some of the striking observations in a 58-page report released Thursday by a special panel, appointed by the Trudeau government to review what the panelists described as one of the most controversial industrial projects on the planet.

Kinder Morgan, a Texas-based multinational energy company, wants to build the Trans Mountain expansion project. It would consist of installing a new pipeline alongside an existing one for most of its 1,150 kilometre route between the Edmonton and Vancouver regions. The proponent's top Canadian executive, Ian Anderson, raised the controversy a notch Thursday with questions about whether humans cause climate change.

Kinder Morgan says the project will create thousands of jobs and boost the economy through a safe and responsible project. Its detractors say the whole idea is too risky and would push Canada's climate change goals out of reach.

No mandate to make recommendations

The Trudeau government set up the panel because of concerns that the previous review by the energy regulator, the National Energy Board, was biased and inadequate.

"The issues raised by the Trans Mountain Pipeline proposal are among the most controversial in the country, perhaps in the world, today: the rights of Indigenous peoples, the future of fossil fuel development in the face of climate change, and the health of a marine environment already burdened by a century of cumulative effects. There are matters of public safety and environmental sustainability, overlaid against economic need in a province where a once-strong resource sector is currently under severe strain," — panel report

But even after several months of heated and emotional consultations in various cities in Alberta and British Columbia, the three member panel made up of Kim Baird, Tony Penikett and Annette Trimbee were not able to say whether the government should approve or reject the project, because they admit this wasn’t their mandate.

Instead, they highlighted many of the factors that the government would need to review, along with a number of arguments in support or in opposition to the major project.

The three experts said that the economic, environmental and political aspects of the project are rapidly changing. The report referenced a wide variety of scientific and media sources, including National Observer.

"On a hot August evening in the Simon Fraser University’s Segal Graduate School of Business in downtown Vancouver, a capacity crowd of nearly 300 people began to grow restive in the Ministerial Panel’s public town hall. The meeting had started in what the online National Observer had described as 'a jubilant mood,' with a protest on Granville Street, followed by the ceremonial delivery of a large anti-pipeline petition — a dozen symbolic (but empty) file boxes and a single USB drive bearing 140,000 names. But the jubilance had given way to impatience and a certain amount of anger as some of the speakers attacked the panel’s credibility and impartiality, and others spoke in increasingly emotional terms about the potential impact of the proposed pipeline." — panel report

“…The conditions that prevailed when the project was first proposed have changed, and many of the circumstances that may affect the need for — and impact of the project over time are also uncertain,” said the report, released by the federal government on Thursday.

“Such is certainly the case in this instance.”

Oilsands producers have high costs because they require large amounts of energy and water to separate the bitumen — a heavy oil that is mixed in natural deposits found in northern Alberta — from the sand. The oilsands represent the world’s third largest known reserves of crude oil after Saudi Arabia and Venezuela but because of high environmental and economic costs, the industry has struggled to compete with more conventional forms of oil.

“Since Trans Mountain Pipeline ULC submitted its application to the National Energy Board (NEB) in July, 2013, circumstances have changed dramatically,” the report said. “Oil prices have fallen, governments have been replaced and policies (and laws) have evolved on issues ranging from First Nations rights and title to climate change. The political, economic and environmental conditions that prevailed in 2013, when Trans Mountain asked permission to build the pipeline, were much different by May, 2016, when the NEB recommended that the federal government approve the project as being in the national public interest.”

Canada's national energy regulator, the NEB, also took a few punches in the report after being hammered in recent months by a series of controversies and criticism that it is too close to industry.

The panel explained that many people, both supporters and opponents of the project, felt there were "gaps" under the previous NEB review of Kinder Morgan's project, leading up to its recommendation that the expansion get the green light.

"There remains a strong public perception that there were significant gaps in the NEB review and a sincere concern about the social, economic and environmental impacts of the Trans Mountain Pipeline proposal."

The report also highlighted how many Indigenous leaders felt that the government had failed in its constitutional duty to consult with them on the project, signalling that even if Kinder Morgan gets a green light, it is likely facing some lengthy legal battles from communities who are determined to stop it.

"For most Indigenous presenters who spoke to the panel, the fundamental concern was how they were able — or not able — to participate in decisions that have major impacts on their territories and their people," the report said. "As many noted, First Nations rights in this regard are no longer in doubt. After generations of engagement, direct action, and litigation, First Nations rights and title are now established in law."

It noted that the "bottom line, for many" was that "narrow consultations" and one-time benefit agreements wouldn't substitute for serious nation-to-nation negotiations that recognize Indigenous rights.

Natural Resources Minister Jim Carr told reporters in Ottawa that the Trudeau government acted in good faith and did its best after being left with a mess created by the previous administration led by former prime minister Stephen Harper.

“We know that these are issues that do not easily achieve consensus, but I do know that the extra time that we have devoted to meaningful consultation with Indigenous peoples is a considerable improvement on the process that we have inherited, and I think that the credibility that will allow will be appreciated by many Canadians, and we see how many,” Carr said outside the House of Commons.

The panel also highlighted that the issue of climate change could not be avoided in any decision the government makes about a project that could boost expansion in the oilsands, Canada’s fastest growing source of heat-trapping carbon pollution.

“Climate change is not a new issue, although the evidence of impact continues to gather and the implications seem increasingly dire,” the report said. “Even though the warming influence of a passing El Nino was starting to wane, July and August of 2016 were the two hottest months in recorded history, carrying on a 16-month trend during which every month had been the hottest ever – the hottest June, the hottest May, the hottest April.”

Another factor the panel recognized was a split between a large number of supporters of the project in Alberta and a boisterous opposition in British Columbia.

"If the attitude of Albertans were to be summed up in a single word, it would probably be: impatience. It has been a difficult couple of years in a province that has prided itself on being one of the most productive economies in Canada."

"As people pointed out in both provinces, the project is such that its principal benefits flow to Alberta while the environmental and economic risks fall much more heavily on British Columbia. This creates a tension that might only be addressed at a federal level."

The panel said its consultations broke a Canadian record for public participation with 35,259 responses, the highest-ever response rate to a government of Canada questionnaire, surpassing one on prostitution legislation in 2014 and another on marijuana legislation in 2016.