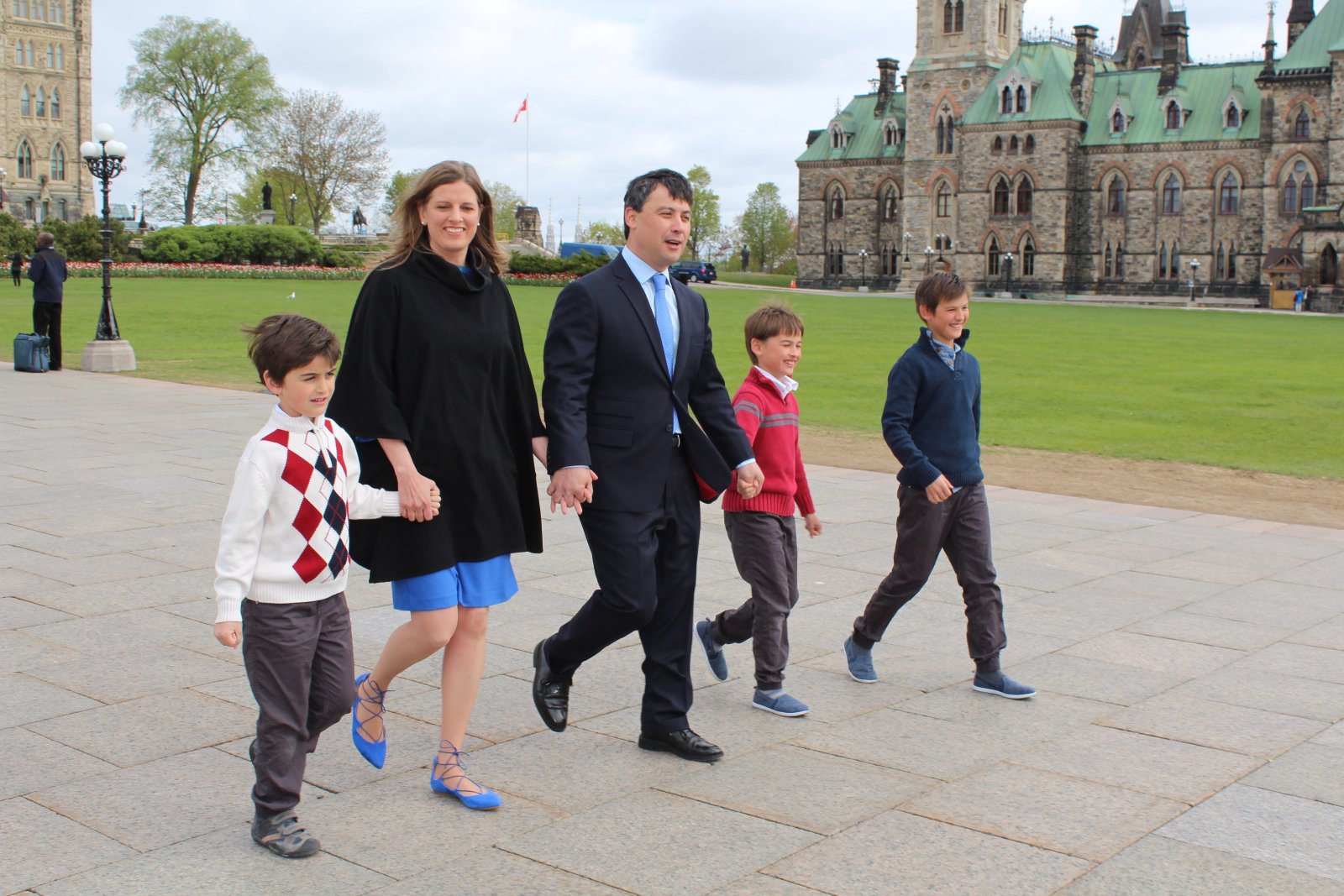 Conservative MP Michael Chong walks with his family on Parliament Hill as he launches his party leadership campaign on May 16, 2016. Photo by Mike De Souza.
Previous story

Conservative MP and leadership candidate Michael Chong has offered a bold plan to cut taxes, help low income households, and reduce greenhouse gas emissions. It is by far the most sweeping plan of any of his fellow leadership contenders – indeed, it may be the most dramatic climate policy and tax cut plan to be put on the table by any federal party or politician.

Chong’s plan would cut personal income taxes by $22 billion dollars per year, slashing the current five federal tax brackets – 15 per cent, 20.5 per cent, 26 per cent, 29 per cent, and 33 per cent - to two – keeping only the 15 per cent and 29 per cent–a 10 per cent cut in personal income taxes overall. He would also cut corporate income taxes by five per cent (roughly one per cent off the 15 per cent federal rate), increase the GST credit to low income households, and double the federal Working Income Tax Benefit, which helps low income workers. These changes would be paid for by reducing federal tax deductions, credits, and other tax expenditures by 50 per cent, and by gradually bringing in a new federal carbon tax.

Chong’s federal carbon tax would kick in in 2021, starting at $10 per tonne (on top of the $30 per tonne provincial carbon tax mandated by the Trudeau government). The federal carbon tax would increase by $10 per year after that until the combined carbon price reaches $130 by the year 2030. This is in line with what economists forecast is necessary for Canada to meet its emissions targets of reducing greenhouse gas emissions by 30 per cent from 2005 levels by 2030. Since it is hard to predict exactly how Canada’s economy or emissions will grow 14 years from now, Chong’s plan wisely proposes striking an expert panel of economists to advise on any adjustments to the carbon price necessary to meet Canada’s 2030 goals and maintain competitiveness.

The plan would deal with the challenge of transferring revenues from resource intensive provinces like Alberta and Saskatchewan by leaving the revenues from large industrial emitters, like the oil and gas sector, in the hands of the provinces. The federal carbon tax would only apply to emissions from transportation and buildings (which are roughly equal per capita across the country). The challenge of trade competitiveness for large emitters would be dealt with by a system of output based allocations (OBAs), similar to the plan being brought in in Alberta.

The increasing federal carbon tax would allow Ottawa to get rid of the myriad of regulations and subsidies the federal government currently has in place to deal with carbon emissions – often at a vastly higher price per tonne than a straight tax on emissions. Under the Chong plan, everything from home housing rebates to biofuels mandates to emissions standards for cars would be scrapped. Consumers and businesses could decide for themselves how best to reduce their emissions or face a higher carbon price.

This is bold climate policy, proposing the highest carbon price of any politician except for Elizabeth May and the Green Party. And it is bold economic policy which would slash personal taxes, cut corporate taxes, eliminate regulation and red tape, and help low income households.

Michael Chong calls his plan “revenue neutral,” but it is in fact revenue negative – meaning it will cut taxes overall by more than it will raise. He would bring in his major tax cuts right away, but only increase the carbon price gradually – so over the first ten years of the plan, it would represent a net $87 billion tax cut for Canadian households and businesses.

The Chong plan is full of pro-growth, pro-work incentives – cutting marginal rates for personal and corporate income taxes, which are the biggest disincentives to work and hiring, and increasing WITB encourages people near the poverty line to seek work rather than rely on welfare. So the net effect of this package is likely to contribute to greater economic growth and lead to higher returns than Chong’s proposal is predicting.

And while the federal Conservatives claim to support Stephen Harper’s targets of a 30 per cent emissions reduction by 2030, only Michael Chong has proposed a plan that might actually get the country there.

There are now 10 candidates in the federal Conservative leadership race. Some of them have come out against any form of carbon pricing. Others have kept quiet. But so far none of them has proposed a plan that comes close to doing as much to reduce taxes or reduce emissions as Michael Chong.

The Chong plan is the first bold entry in the Conservative environment and economy sweepstakes. Let’s hope that it isn’t the last.