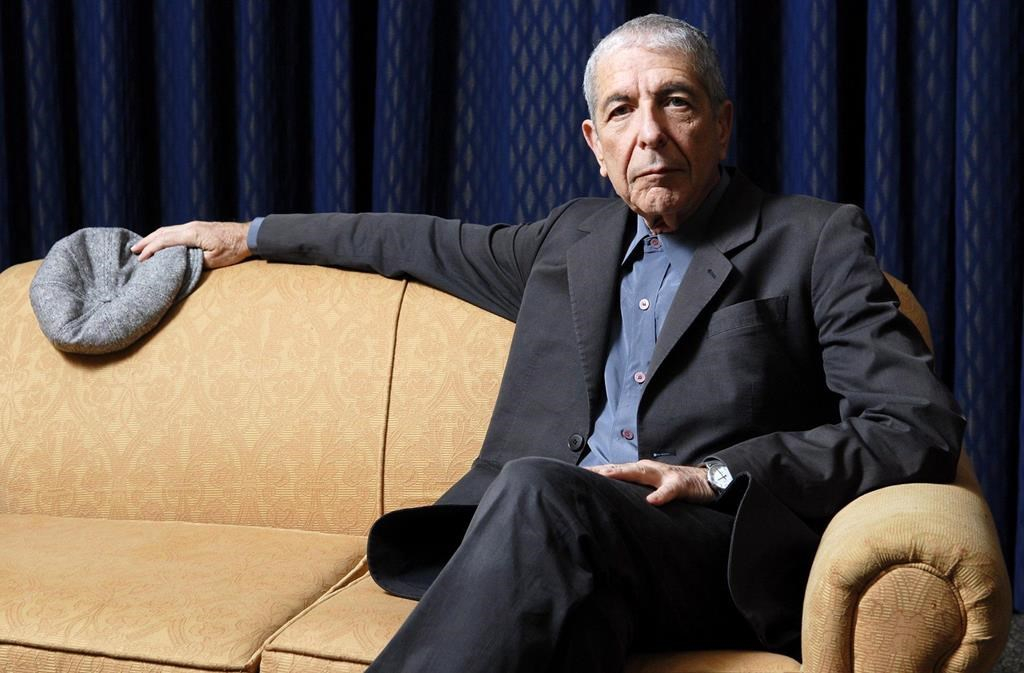 Leonard Cohen died peacefully at his Los Angeles home at the age of 82, his son Adam said in a statement Thursday. Photo by the Canadian Press.
Previous story

Leonard Cohen — writer, poet, composer, singer, renowned seducer and, for many, the epitome of cool — has died at the age of 82.

His sonorous, tobacco-painted baritone was once described as "the musical equivalent of rotgut whisky" and his lyrics and texts studied spirituality, sex, power and love.

Cohen died peacefully at his Los Angeles home, his son Adam said in a statement Thursday.

Just weeks ago Cohen released a new album, "You Want It Darker." Cohen was still performing to sellout crowds and drawing new generations of fans at an age when most people would have settled back in their rocking chairs to reflect on their life's accomplishments.

Now all that's left is his prodigious body of work, which includes the oft-covered "Hallelujah," which was sung by k.d. lang during the opening ceremony of the 2010 Winter Olympics in Vancouver.

Pointing to W.B. Yeats, Walt Whitman and Canadian poet Irving Layton among his literary influences, Cohen himself had fans among some of music's top names, including U2, REM, Johnny Cash and Bob Dylan.

In a recent New Yorker profile on Cohen, Dylan expressed deep admiration for his work.

"I like all of Leonard's songs, early or late," Dylan said. "'Going Home,' 'Show Me the Place,' 'The Darkness.' These are all great songs, deep and truthful as ever and multidimensional, surprisingly melodic, and they make you think and feel. I like some of his later songs even better than his early ones. Yet there's a simplicity to his early ones that I like, too."

In reviewing his 2008-10 world tour, Britain's Independent newspaper declared that "to hear him sing is still an experience to truly make young women and romantics shiver and sweat."

Cohen's compositions endlessly entranced audiences, who usually treated the reclusive performer with awe. However, his poetic songs were far from being toe-tappers, with some clocking in at seven minutes long and dealing more in substance than sass.

His songs prompted him to be dubbed the "godfather of gloom," the "poet laureate of pessimism," the "grocer of despair" and the "prince of bummers." One reviewer in the 1970s described his songs as "music to slit your wrists to."

But he was hailed for his intelligence, humility, curiosity and generosity.

Cohen was an honorary pallbearer at the state funeral of former prime minister Pierre Elliot Trudeau - a fellow Montrealer - in September 2000, along with U.S. President Jimmy Carter, Cuban President Fidel Castro and the Aga Khan.

Kurt Cobain paid tribute to Cohen in a song off Nirvana's final album "In Utero."

"Give me a Leonard Cohen afterworld," Cobain moaned in "Pennyroyal Tea." "So I can sigh eternally."

"I see no disenchantment in Leonard's lyrics at all," Dylan told the New Yorker.

"There's always a direct sentiment, as if he's holding a conversation and telling you something, him doing all the talking, but the listener keeps listening."

The 2003 Order of Canada inductee is said to have had a fantastic sense of humour and loved to crack jokes.

He wasn't averse to poking fun at himself, as he did before a sold-out crowd at Montreal's Bell Centre during a 2012 concert.

"Sometimes, I stumble out of bed, look at myself in the mirror and say to the mirror, 'Lighten up, Cohen'," he said to laughter.

Compared to some entertainers who march through their famous lives with brass-band personalities, Cohen glided along unassumingly, although any tidbit of news or sighting was almost treated with second coming-type excitement.

He could show up in the darndest places other than the sun-drenched streets of Los Angeles, where he often recorded. Cohen was so taken with the Greek island of Hydra that he bought a house there in 1960 for $1,500 and lived in it even though it had no electricity or running water.

He also stayed in a Zen Buddhist monastery on Mount Baldy near Los Angeles for five years and popped up in his Montreal hometown where he strolled around the city. The singer once left a TV reporter doing man-in-the-street interviews gobsmacked when the journalist unknowingly tapped him for an opinion. Cohen shyly declined.

He also liked to slide into a booth at the fabled Montreal deli The Main for a smoked-meat sandwich.

But the 2008 inductee into the Rock and Roll Hall of Fame struggled to define the location of the creative well that spawned his offerings.

"If I knew where the songs came from, I'd go there more often," he said in a 1992 interview with The Canadian Press.

"Some people write great tunes in the back of taxicabs but it takes me endless amounts of writing and rewriting to come up with something I can wrap my voice around."

Another time he compared it to being like a "bear stumbling into a beehive."

The ever-dapper Cohen, who favoured black suits, fedoras and tweed caps, was born in Montreal on Sept. 21, 1934, to a middle-class family. His father, who ran a well-known clothing store, died when he was nine.

He pursued undergraduate studies at McGill University and became president of the debating union. He flirted with a legal career and attended McGill law school for a year after completing his bachelor's degree. He also went to Columbia University for a year.

But literature had a stronger call than litigation.

"Let Us Compare Mythologies," his first book of poetry, was published in 1956 when he was an undergrad. The "Flowers For Hitler" poetry collection and the novels "The Favourite Game" and "Beautiful Losers" followed in the 1960s.

But as eloquent as he could be on the printed page, establishing himself as a poet and novelist of renown by the age of 32, Cohen decided that songwriting might pay better.

It was a career change that raised a few eyebrows and agents in New York reportedly asked him, "Aren't you a little old for this game?"

It didn't stop him.

A big break came in 1966 when Judy Collins recorded his standard "Suzanne," and he came out with his first album "Songs of Leonard Cohen" the same year.

That was followed up with "Songs from a Room" in 1969, which included the popular "Bird on the Wire."

He had a fairly steady output although his popularity dipped in the 1970s as disco, not doom, was deemed to be the treat for consumers' ears. But Cohen began a comeback in 1984 with "Various Positions," which included "Hallelujah."

Ironically, "Hallelujah," was on the only Cohen album ever rejected by his record company and was little noticed when it did come out on an independent label. But it has become modern standard after hundreds of cover versions, high-profile performances and use in TV and movie soundtracks.

It's played at weddings, funerals — including the 2011 state ceremony for then NDP leader Jack Layton — school concerts and religious services. It was repeatedly played on VH1 after the 9/11 terrorist attacks and at a telethon for relief efforts after the Haitian earthquake in 2010.

But the Grammy- and Juno-winning Cohen, who once starred as head of Interpol in an episode of TV's "Miami Vice," seems to have been defined almost as much by his libido as his music and his words.

Actress Anjelica Huston once summed him up as "part wolf and part angel."

"Death of a Ladies' Man," a 1977 collaboration with Phil Spector and his famous "wall of sound" style, traded on Cohen's love life, although the singer described the final product as "grotesque."

Cohen was generally discreet about the women he dated, with the tally mainly being taken by the media.

"I never discuss my mistresses or my tailors," he told an interviewer, although he has broken that rule a few times, describing an encounter with Janis Joplin in the song "Chelsea Hotel No. 2."

As well, one of his signature tunes, "Suzanne" is based on another lover he knew in Montreal.

The 1991 Canadian Music Hall of Fame inductee's love life served to fuel a standing quip in his hometown that his Montreal conquests alone could fill a small phone book. His prowess even rated a tip of the hat in Rolling Stone magazine's 2004 album guide.

"For all his poetic angst and folkie sorrow, Cohen could never hide the fact that he was getting more rock-star booty than any other Canadian, before or since," wrote Rob Sheffield.

"Whispering in his glamorously tattered voice, he still makes all his songs sound like sinful confidences shared over bottles of bloody-red wine."

At the height of his popularity in France in the 1960s, it was said that if a French woman owned one album, it was likely to be by Cohen.

But he dismissed it all with a resigned shrug.

"No one masters love and I don't seem to ever master the song," he said. "You have to struggle with it, like it was the first time you ever did it."

In the New Yorker profile dated Oct. 17, Cohen hinted he was feeling unwell and struggling to finish songs he had been working on.

"I don't think I'll be able to finish those songs. Maybe, who knows? And maybe I'll get a second wind, I don't know. But I don't dare attach myself to a spiritual strategy. I don't dare do that. I've got some work to do. Take care of business. I am ready to die. I hope it's not too uncomfortable. That's about it for me."

Opinion: "I just broke down"