Opinion: How Homer Simpson did vote 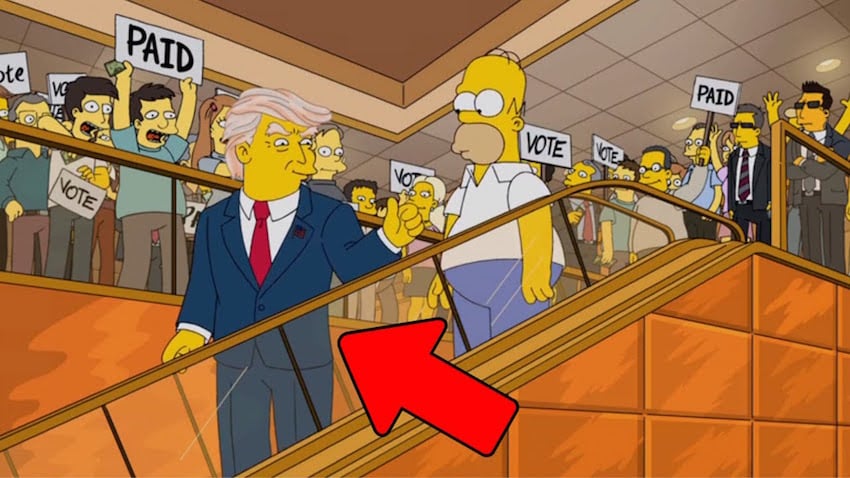 In my Nov. 4 piece about how Donald Trump’s candidacy meshed with the worldviews of certain residents of Springfield, I concluded that despite the Simpsons producers’ wishful thinking, Homer Simpson’s vote would be a last-minute decision and that it was too bad that bars no longer close on Election Day.

As an update, here is what I think happened last Tuesday:

After being told at the polling station that he isn’t on the registration list (probably went to the wrong polling station!), Homer heads to Moe’s Tavern where Carl and Lenny are trading barbs about the candidates (“she’s crooked”; “he’s the crook”; “she’s sick”; “he’s sickening”; “she’s yesterday’s news”; “he’s tomorrow’s nightmare”). When Homer tells what happened, Barney realizes that the election isn’t November 28, and Moe says, “Hey Homer, why don’t you go back and get one of those provisional ballots and put that crooked lady behind bars?”

As a determined Homer walks out, taking Barney with him, he sees the TV above the bar (set permanently to Fox News) reporting that the FBI found nothing criminal in Hillary’s emails. This causes him to conclude that the Clintons finally got to Comey. Homer admits to himself that while he repeatedly told pollsters he was undecided, he didn’t want Marge or anyone to know he had been leaning Trump all along. (See: the Bradley effect.)

For the sake of brevity and intrigue in my pre-election article, I left out a number of peripheral Simpsons characters. With those factored in, Trump wasn’t likely to need Homer Simpson’s vote to win Springfield.

I had omitted several Republican stalwarts surely in the Trump camp:

They all ascribe to the “Strict Father” model described by linguist George Lakoff. As do a few other characters I had omitted, who are also rejoicing over the election outcome:

This more than offsets other peripheral characters I had bypassed, including Clinton supporters Artie Ziff (another Internet billionaire for Hillary) and Crazy Cat Lady (classmate of Hillary’s at Yale Law); Dr. Nick (graduate of Hollywood Upstairs Medical College), one of more than 1 million Americans who voted for Dr. Jill Stein; and near-sighted and ever-unlucky Hans Moleman who got run over by a runaway pram on the steps leading up to his polling station.

According to Simpsons writer Dan Greaney, the show’s episode in 2000 that featured a Trump presidency was “a warning to America….the logical last stop before hitting bottom.” (This is why on Sunday night, in the show’s opening, Bart was writing “being right sucks” on the chalkboard)

My intention behind this how-would-Springfield-vote exercise was to provide insight into why surprisingly many Americans were viewing a Trump presidency as a way up, not down. I felt that even if Trump lost, an understanding of how others see the world would be crucial to avoid us all hitting rock bottom.

I only wish I had come up with the idea for the article months earlier. D’oh!

How will Homer Simpson vote?