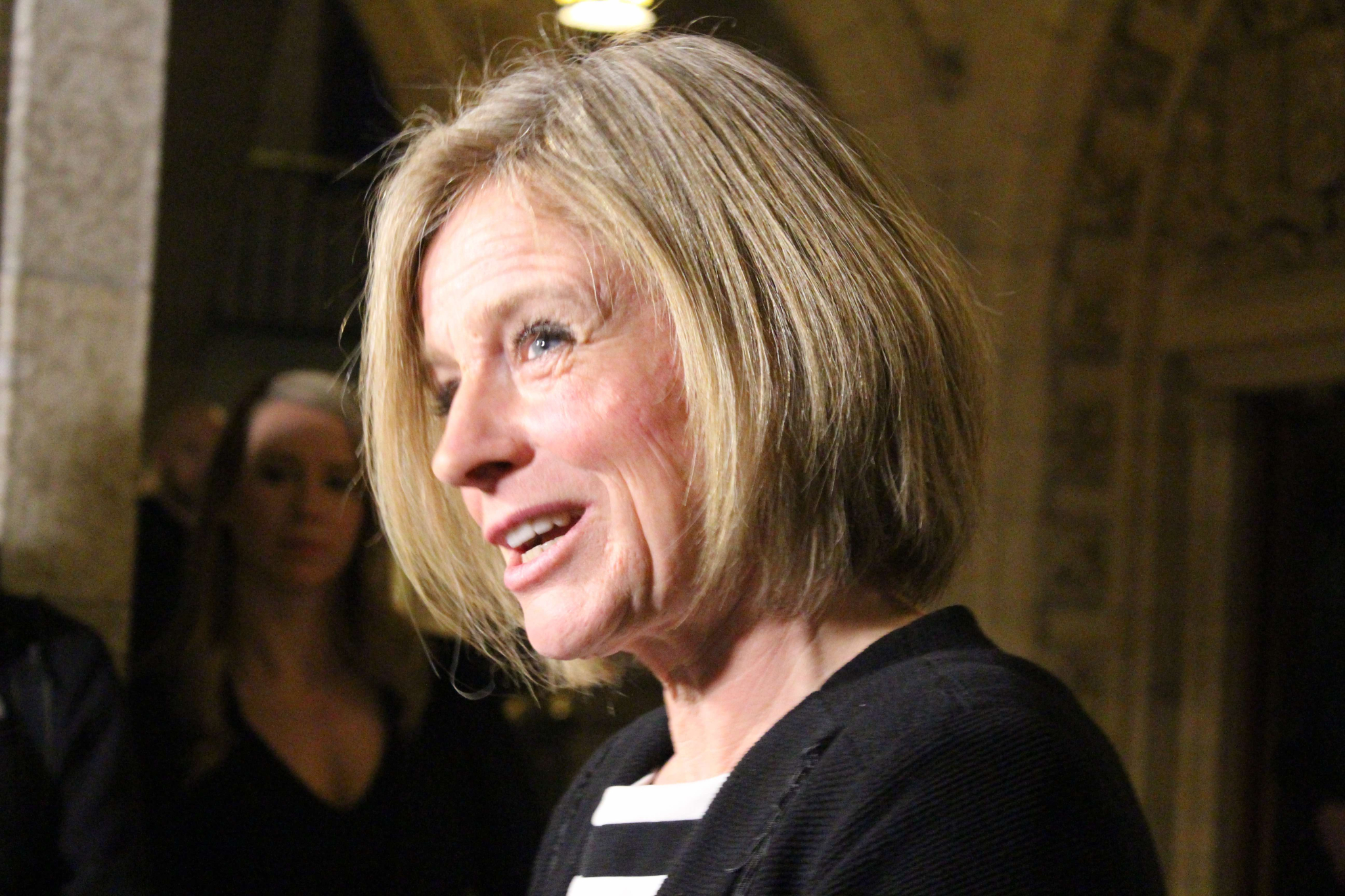 Alberta’s New Democratic Premier Rachel Notley was all smiles Tuesday evening as she emerged from a meeting with the prime minister.

Moments earlier, she shook Justin Trudeau's hand and thanked him on behalf of all Albertans for his leadership and “demonstrated commitment" to building the economy while moving forward aggressively on the environment.

The meeting and her flight to Ottawa were prompted by Trudeau's announcement that his government would be approving two controversial pipeline projects, despite public opposition, while rejecting a third project.

​Environmentalists have said that the approval of new pipelines to accommodate an additional one million barrels of oil per day would push Canada's climate change goals out of reach, but Notley later told reporters that these pipelines open the door to solutions, while protecting jobs.

Notley explained that her government was now "well positioned" to support Trudeau’s efforts to ramp up a tax or price on carbon pollution to $50 per tonne by 2022, up from a proposed starting price of $10 per tonne in 2018.

She said the approval of two new pipeline expansion projects, one to the west coast of British Columbia — Kinder Morgan’s Trans Mountain expansion — and one to the U.S. Midwest — Enbridge’s Line 3 replacement — are providing enough economic opportunities to allow oil-rich Alberta to pursue its own transition away from fossil fuels.

Alberta was 'brutally slammed' by collapse of oil, Notley said

While some other New Democrats, Liberals, scientists, environmentalists and First Nations groups have vowed to fight to reverse the Trudeau government’s decision, Notley said it is putting Alberta — which has the world’s third largest reserves of oil after Saudi Arabia and Venezuela — and its economy back on track. The province has lost tens of thousands of jobs ever since global oil prices collapsed in 2014, with its oilsands industry unable to compete with more conventional forms of oil.

Some economists say new pipelines are not going to help Canada’s economy as the world moves away from fossil fuels, but Notley, Trudeau and industry stakeholders say they will provide a bridge to a cleaner economy, by accessing more potential buyers and a higher price for Canadian oil.

“Prime Minister Trudeau is showing some extraordinary leadership today,” Notley said at a news conference. “Our province has been brutally slammed by the collapse in commodity prices and it has been a long, dark night for the people of Alberta as a result. Today we are finally seeing some morning light...

Alberta has introduced a climate change plan that includes an economy-wide price on climate pollution. It also includes a cap that would allow annual oilsands emissions, Canada's fastest growing source of greenhouse gases, to rise about 40 per cent to 100 million tonnes of carbon emissions per year.

But its economy has struggled to find new markets for the oilsands sector due the increasing competition it is now facing from U.S. producers and lack of access to markets beyond America.

Under previous governments, several major pipeline projects failed to get approval. But Notley said that her government has gotten results by setting a different tone in relations with the federal government than her predecessors, Alberta Conservatives who ruled the province for 44 years before her government was elected in 2015.

Notley's NDP government stopped denying climate change and worked with other Canadians instead of shouting at them, she said.

“We needed to get approval of a pipeline that got our product to different markets, to the Asian—Pacific. And so we said very clearly at the time that we couldn't endorse the additional price, above and beyond what we had already priced in Alberta, without that (approval of pipelines),” she said.

“But now I believe that we’re well-positioned to work with the rest of Canadians to make Canada an environmental leader, while at the same time protecting the jobs of so many people who rely on them to feed their families and put roofs over their heads.”

LOL. Notley is doing her very

LOL. Notley is doing her very best to suck up the oil industry.

In Canada's "Sixth National Communication and First Biennial Report on Climate Change for 2014" submitted to the UNFCCC, the federal government predicted that GHG emissions from the Alberta bitumen oil sands would reach 101 Mt (CO2 eq) by 2020, up from 34 Mt in 2005, and 137 Mt in 2030. In its "Second Biennial Report" submission to the UNFCCC (April 2016). the new government predicts that GHG emissions coming from the Oil and Gas sector (emissions specifically related to the bitumen oil sands were not included in that report) will go from 157 Mt in 2005 to more than 210Mt in 2020, and 242 Mt in 2030 (for 2030, the two reports show the same amount of total GHG emissions for Canada at 815 Mt). Even if emissions from the Alberta bitumen oil sands are capped at 100 Mt per year, Canada's total GHG emissions will have to be cut down dramatically if the federal government wants to reach its reduction target for 2030 of 524Mt. The approval of two major pipelines will make that goal more difficult, almost even impossible to reach. The lowest emissions scenario puts total Canadian GHG emissions at 765 Mt in 2030 which is 16 Mt higher than 2005. These predictions don't even include emissions from the LULUCF sector which has been a net source of GHG emissions in the last twenty or more years (+46 Mt in 2104 alone). The $10 carbon tax proposed by the federal government won't make a dent in the level of emissions.

"But now I believe that we’re

"But now I believe that we’re well-positioned to work with the rest of Canadians to make Canada an environmental leader..." - while producing and transporting bitumen through other provinces?

Speaking of caps, is that a red dunce cap on Notley's head in the above photo?