By Elizabeth McSheffrey | News, Energy | November 29th 2016
#590 of 2005 articles from the Special Report: Reports from the Race to a Safer World 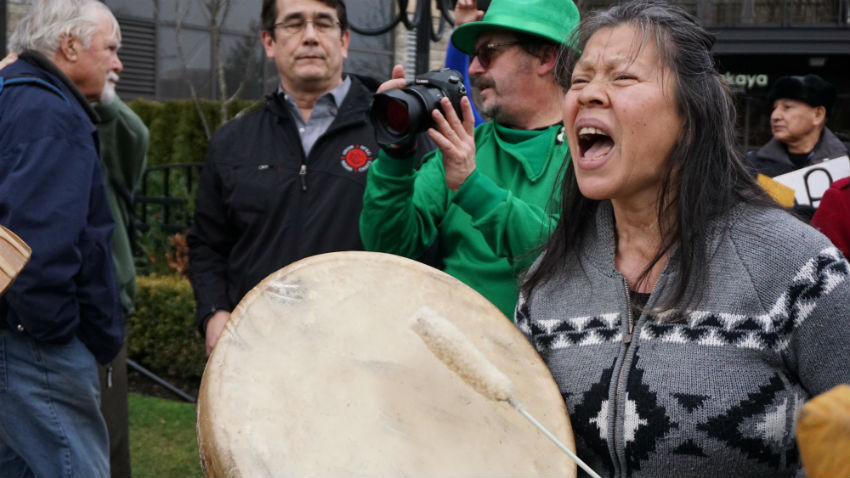 An Indigenous protester demonstrates outside the National Energy Board hearings for Kinder Morgan's Trans Mountain expansion project in Burnaby, B.C. on Jan. 19, 2016. Photo by Elizabeth McSheffrey.
Previous story
Next story

The reaction is pouring in swiftly and relentlessly to Prime Minister Justin Trudeau's triple pipeline announcement this afternoon.

"Approving Kinder Morgan’s heavy oil pipeline expansion is a big step backwards for Canada’s environment and economy," he said in a press statement. "This project was approved under a flawed and biased Harper-era regulatory process that shut out local voices and ignored climate change and First Nations concerns.

"I – along with the tens of thousands of residents, local First Nations, and other Metro Vancouver cities who told the federal government a resounding ‘no’ to this project – will keep speaking out against this pipeline expansion that doesn’t make sense for our economic or environmental future."

The Canadian boss of the Texas-based Kinder Morgan was pleased.

“This Project has evolved substantially as a result of the scrutiny it has undergone and the input received from communities, Indigenous and Metis groups and individuals. No voice has gone unheard, and we thank everyone who has helped make this Project better,” said Kinder Morgan Canada president Ian Anderson.

The Trans Mountain expansion (TMX), a proposal to triple the capacity of an existing pipeline network that links the Edmonton and Vancouver regions, was opposed by at least 21 municipalities and 17 First Nations. If constructed, it would ship roughly 890,000 barrels of crude oil and petroleum per day, and emit as much as one million tonnes of heat-trapping carbon pollution annually.

“The Northern Gateway Pipeline was a dangerous proposal and we applaud the government's decision to deny it, however it does not justify the Prime Minister’s decision to approve the Kinder Morgan pipeline,” said Sven Biggs, an energy and climate campaigner for Stand, in a Tuesday press release.

“Today’s decision on the Kinder Morgan pipeline signals the beginning of a new phase in the struggle against pipelines. You will see the movement continue to escalate in the streets as the number of protests and actions continue to grow, in the courts, and at the ballot box here in B.C. and beyond.”

The project, proposed by the Texas-based Kinder Morgan, is expected to increase tanker traffic in Vancouver waters by up to 600 per cent, and critically threaten the endangered Southern resident killer whale population, which is sensitive to underwater noise and struggling with a decline in its salmon food stock. It would also cross the unceded territory of the Tsleil-Waututh First Nation, which has launched two lawsuits against the project and been among its most vocal opposition.

"Right now, Prime Minister Trudeau is approving a project that is a violation of our stewardship policy and our law," said Tsleil-Waututh Councillor Charlene Aleck. "This issue is as black and white as the killer whales they endanger. This is about our survival and the protection of our home, this inlet, and the planet. They are making a big mistake, we will not allow this pipeline to be built."

“Rejecting Enbridge does nothing to reduce the risks associated with Kinder Morgan’s pipeline and tankers," added Jessica Clogg, executive director of West Coast Environmental Law. “Community opposition to the project has never been stronger, and as we’ve seen with Northern Gateway, that’s what will prevent this pipeline from ever being built.”

Conservative politicians across the country had mixed reactions.

In Ottawa, interim Conservative leader Rona Ambrose said she was disappointed that Trudeau had killed the Northern Gateway project — a pipeline that was rejected by the Federal Court of Appeal earlier this year after it concluded that Ambrose and others in the former Harper government had failed to properly consult with First Nations — and believed that it was unlikely the Kinder Morgan pipeline would ever proceed.

"On Kinder Morgan, what I will say is that I don’t think that this pipeline will be built," Ambrose told reporters. "I said today to the prime minister in the House of Commons that approval is the beginning, and yes is the beginning, but now he needs to use his political capital to see this project built, and I don’t think he has enough of it. I think that the protests will ensue. The fight is on. And so I think today what we saw is one project be rejected, which is 4,000 jobs, and another project, sadly, be approved that I think all of us know has very little chance of being built."

In Saskatchewan, Premier Brad Wall said Trudeau's approvals were "a step in the right direction" and that his prairie province, also an oil producer, welcomed the approvals of Trans Mountain and Line 3.

"As for the latter pipeline, it will involve significant investment and new jobs in Saskatchewan during construction," Wall said in a statement posted on his Facebook page. "We thank the prime minister and the federal government for this announcement."

Wall, who has also been a strong critic of Trudeau's climate policies, said the new pipelines would help Canadian oil producers get better prices for their product, by providing access to new markets. He also said that he believed the Energy East pipeline would be the most important one for his province and that he hoped it would "also be approved by the appropriate review and decision making process."

In B.C., despite having rejected the project earlier this year based on Kinder Morgan's inability to prove it would meet stringent "world leading" oil spill safety requirements, the government greeted the news with a neutral statement. The province said it will still hold the company to its five provincial project requirements, including top notch oil spill response, prevention, and recovery systems, sound recommendation from the NEB review panel, and a fair share of fiscal and economic benefits for B.C. and Indigenous people.

"Because we have taken that clear and principled approach to stand up for our province, we have seen the proponent and the federal government take actions, including Ottawa's recent Ocean Protection Plan to address world-leading marine spill prevention and response," said Environment Minister Mary Polak. "I understand the BC Environmental Assessment Office anticipates that it will soon complete B.C.'s environmental assessment, which has been underway for seven months. I have every confidence in B.C.'s environmental assessment process."

The province's Green Party leader, Andrew Weaver, on the other hand, bulldozed the approval. Weaver, a climate scientist, has fought the expansion from the beginning, along with federal Green Party leader Elizabeth May, who recently said she would be willing to be arrested while protesting the oilsands expansion project.

"The approval of this project is completely contradictory to this government’s rhetoric at the Paris climate talks, as well as their commitments to finally embrace a new era of reconciliation," said Weaver in a press release.

“I was an intervenor in the National Energy Board review. I have read through Kinder Morgan’s application, reviewed thousands of pages of documentation and asked Trans Mountain more than 600 questions about their spill response capacity. As a scientist, I can say unequivocally that we remain completely and utterly unprepared for a major oil spill."

"I have to say that I’m devastated by this decision," May told reporters in Ottawa. "Many may have expected it, but I really believed that Prime Minister Trudeau would examine evidence. Nothing has changed. Kinder Morgan process remains broken and flawed."

Support for TMX in Alberta

According to the Kinder Morgan, the pipeline expansion will generate more than $46 billion in government revenue for provincial and federal governments, and at least 15,000 jobs per year during construction. In a statement released after the federal approval, Trans Mountain applauded cabinet's decision to expand Canada's access to world markets for its resources, and reaffirmed its commitment to meeting all 157 of the federal approval conditions, outlined by the National Energy Board in May.

"In today’s announcement the federal government commits to implementing the recovery plan for the southern resident killer whale and the establishment and funding for an Indigenous advisory and monitoring committee," said Kinder Morgan Canada's Ian Anderson. "Taken together, we’re confident we will build and operate this Project in a way that respects the values and priorities of Canadians.”

The approval was celebrated by local business groups, the Canadian Association of Petroleum Producers, and Alberta Premier Rachel Notley.

“Our province has been brutally slammed by the collapse in commodity prices," she said in a Tuesday statement. "It has been a long, dark night for the people of Alberta as a result. Today we are finally seeing some morning light... Let's work together right across this country to protect our environment. And let's work together — as we're doing today — to show that there will be jobs and prosperity for Canadians in a greener future."

By Elizabeth McSheffrey | News, Energy | May 19th 2016
Reports from the Race to a Safer World

The drift cards released at

The drift cards released at 20 sites along KM's tanker route travelled far further than government or industry say a spill would go. Some over 1000 km to Haida Gwaii. Science, logic, the precautionary principle, consultation, public opinion and ethics clearly mean nothing.

We have another oil pimp in

We have another oil pimp in Ottawa .

It's a very unfortunate

It's a very unfortunate decision by the federal government. Instead of weaning ourselves off of fossil fuel, we are setting ourselves up to pollute the planet for the next 35-40 years. So for the sake of a few thousand jobs today we are setting up future generations to a very unhealthy standard of life and a seriously deteroriating environment, not withstanding the inevitable oil spills on the coast of bc.

Pipeline companies' back pockets are getting crowded, with Trudeau joining the regulators.

What few people talk about is

What few people talk about is the effect on Albertans of this project. An expansion in drilling will continue to contaminate our air and water, unavoidable results of the fracking that will expand across this province. We already expect a 50% cancer rate in Alberta. How many more people must die before our Governments notice the disastrous effect of fracking on all Albertans? Our agriculture and tourism industries are under threat, along with our health and our future as a place for our children and grandchildren to be able to survive.

Has anybody heard anything

Has anybody heard anything about the THIRD-PARTY Oil Tankers that will carry the Tar from Burnaby through our coastal waters? which flag will they carry, which set of Rules and Regulations [if any] will they be held to? EXXON VALDEZ Part two, coming very soon to a seashore near you!