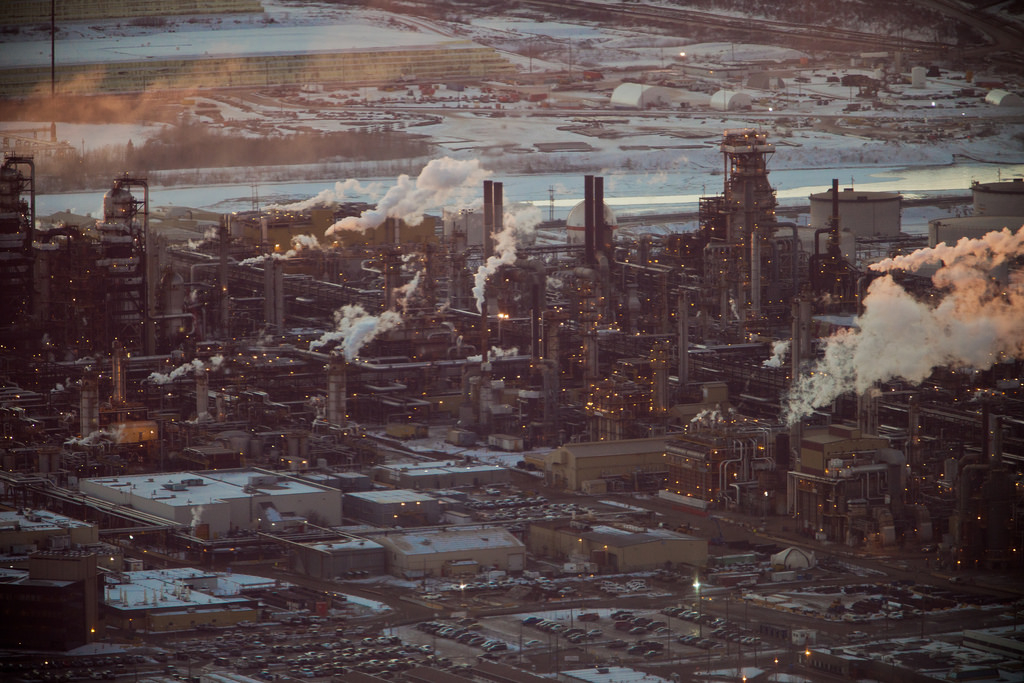 Scientists have found 15 ways that Alberta's oilsands industry can alter the oceans. Photo of oilsands facility in Fort McMurray by Kris Krug
Previous story
Next story

When Stephanie Green and a team of seven other scientists first began their latest research study more than two years ago in Vancouver, she said they were driven by curiosity.

Green, a Canadian, is a Banting post-doctoral fellow at Stanford University in California. She specializes in marine ecology and conservation science.

Most people knew that there was research underway on local impacts of Canada's oilsands industry, which sits in the middle of North America, hundreds of kilometres away from the coasts. But the team of eight scientists wanted to see how much scientific research had been completed on how the industry might affect the oceans.

By the end of their review, which involved scrutinizing 9,260 different research papers, the scientists concluded that there are a lot of things we don’t know about how Alberta's oilsands industry might alter the planet's oceans.

Overall, the scientists found 15 different ways that the oilsands industry — in a Canadian prairie province that’s home to the world’s third largest reserve of crude oil after Saudi Arabia and Venezuela — can cause “stress” or “disturbances” to the oceans.

The findings were published Tuesday in Frontiers in Ecology and the Environment in the midst of what the authors call an "intense public policy debate" about the future of energy.

Ten of 15 oilsands impacts on oceans are 'certain'

The scientists found that at least 10 of these impacts are “certain” to happen from new coastal development, ocean shipping, climate change and the risk of spills of bitumen, the heavy oil found in natural deposits of sand and clay in northern Alberta's oilsands. The other impacts would be probable, according to the study, which underwent a rigorous peer review.

Possible impacts would include disruptions to organisms from the waves and noise of ships, collisions with marine life, the introduction of potentially invasive species, as well as contamination from spills or the products used to clean up after disasters. The study also reviewed larger impacts that are caused by development in the oilsands and other industries such as climate change, ocean acidification and sea level rise.

"The extent of public information varies greatly, from little known effects of bitumen products in oceans to well-established consequences of climate change,"according to the study.

Bitumen is too heavy to flow freely in a pipeline in ambient temperatures. So it must be shipped after being diluted in a toxic solution, sometimes using a formula that is considered to be an industry trade secret. This product, known as dilbit, could react differently in water when compared to other forms of crude oil that have previously been implicated in spills such as the Exxon Valdez tanker disaster off the coast of Alaska in March 1989 or the BP Deepwater Horizon drilling disaster of April 2010 in the Gulf of Mexico. The secret formula used to ship bitumen could also make it difficult for responders to figure out how to clean up after a spill, the new paper said.

The new study — Oil sands and the marine environment: current knowledge and future challenges — was published less than a month after Prime Minister Justin Trudeau’s government approved two major pipeline expansion projects, Enbridge’s Line 3 replacement from Alberta to Superior, Wisconsin in the U.S. midwest, and Kinder Morgan’s Trans Mountain expansion project from Alberta to the Vancouver region on the west coast of B.C.

Together, these projects, if completed, would add more than one million barrels per day of capacity to Canada’s pipeline infrastructure. But they are fiercely opposed by many First Nations leaders, environmentalists and some local mayors who say they pose to great a risk of spills, while pushing the country’s climate change goals out of reach.

The latest research from the scientists adds evidence into the debate that was missing when Trudeau announced his government's decisions.

“As Canadians, I think we often think about what’s happening with our fossil fuel industry, particularly around the oilsands being inland — inland Canada — and looking at the environment there,” said Green, the study’s lead author, in an interview with National Observer. “But as we’re seeing increasing pressure to transport this product globally, it’s connecting that type of industry to the ocean in ways that most of us don’t really consider.”

The Trudeau government and industry have said that they are investing hundreds of millions of dollars to ensure that new oilsands projects and pipelines will be safe and responsible. This includes an "historic" $1.5 billion federal plan to protect the oceans that was announced by Trudeau in November.

But the new research paper has recommended that governments should improve environmental assessments and oversight of industrial projects to fill the gaps in knowledge.

Otherwise, Green and her co-authors — Kyle Demes, Michael Arbeider, Wendy Palen, Anne Salomon, Thomas Sisk, Margo Webster and Maureen Ryan — warn that there's a risk when project proponents are “conflating the ‘absence of evidence’ for ecological effects with ‘evidence of absence’ of impacts.” This, in turn, could lead to damage to valuable natural resources, the study said.

“In the case of oil sands development, our study highlights substantial gaps in the scientific knowledge needed to support sound policy decisions,” the study said. “It also reveals gaps in regulatory mechanisms needed to incorporate existing information into risk assessments in North America, and provides key lessons for jurisdictions internationally that will face these same issues in future.”

Green said that, as a scientist, she thought it would be interesting to examine the full suite of effects of oilsands projects on the oceans in order to determine what information needs to be gathered to understand all of the risks of new development.

“For our group of authors, we understand that there’s a whole bunch of factors that go into the decision-making. But science and evidence need to play an important role for people so that those decision-makers have the right facts and the right information.”

Some of the industry products are disclosed on a website: crudemonitor.ca. But even in government, scientists admit that they haven't studied all types of oil products shipped in Canada since the industry is constantly introducing new products and formulas.

“We’re looking at the ones that are shipped in the highest volumes,” said Carl Brown, a scientist who manages the emergencies, science and technologies section at Environment and Climate Change Canada, in an interview with National Observer, earlier in December. “We’ve looked at different types. So we’ve looked at diluted bitumen (products) that have the condensate as a diluent. We’ve looked at some that have the synthetic crude as the diluent. So. in broad strokes, we’ve looked at the major classes."

The scientists who authored the new study shared their findings with the government in November, prior to Trudeau's announcement, and also shared some of the information with reporters. A few days ago, Wendy Palen, one of the co-authors, even noted on Twitter that the scientists had only found four papers that reviewed direct impacts of bitumen on oceans, describing this as "inadequate risk assessment" of industry.

9000 studies in total, only 4 directly on bitumen in ocean = inadequate risk assessment

But Brown said he was not among the government officials that were consulted about the new study, prior to the pipeline approvals.

Brown said his own team at the federal department has examined the differences between products shipped in the winter and the summer and tries to prepare for the possibility of a spill. He also said that they can learn more when a spill actually occurs.

“So, (we) use that as an opportunity to learn and corroborate the science that we’ve produced,” Brown said. “Luckily those sorts of things are not very common, but we try and learn as much as we can to try to prepare for the next time."

The paper also recommended that industry should pay to help the government fill the gaps in knowledge to prepare for spills, noting that this is what happened in the U.S. after the Exxon Valdez spill in Alaska. The authors proposed that this could come in the form of a per-barrel tax that would go toward a trust fund that could be used to respond to spills.

Tom Sisk, a co-author, said that the scientists elaborated on this proposal in response to some feedback they received from reviewers who asked for more details about how to address the challenges that they had identified.

But both Green and Sisk said they saw opportunities to engage in Canada as it pursues reviews of its oversight of industry, including the environmental assessment process and its review of the country's pipeline regulator, the National Energy Board.

But when asked about the incoming administration of president-elect Donald Trump, Sisk noted that there was some uncertainty about policies and about what might happen to America's unconventional oil resources if global commodity prices start to rise again.

"We are in a period of political transition, obviously, toward an administration that has promised to roll back some of the environmental policies, particularly with regard to climate. We don't know exactly what that will look like," said Sisk, the director of the landscape conservation initiative at Northern Arizona University.

"The recent decrease in oil prices has certainly led to a pause in the development of unconventional oil in the United States, but as soon as those prices climb up to certain point, I'm sure we'll be immediately back into a place where oilsands (deposits) in the United States, and oil shale — other forms of unconventional oil — will begin to look more attractive, from an economic development standpoint and that will pose new threats to land water and climate and biodiversity."

Sisk added that Americans and Canadians both need to think about the long-term and cumulative impacts of projects, instead of focusing on individual proposals, one at a time.

"We're never going to really succeed in aligning energy needs and environmental values if we're always in a reactive mode," he said. "If we're always trying to stop the latest proposal that has bad environmental consequences. We really need to get out in front to create a realistic energy policy that incorporates sound science and prioritizes the environmental and conservation outcomes that the public has repeatedly stated that they want — things that they value.

"And there are always going to be those tradeoffs and we need to do that from a long-term perspective that really incorporates our best scientific understanding and uses evidence to drive these tough decisions that are going to determine what the environmental energy future is. We need to be thinking long term."