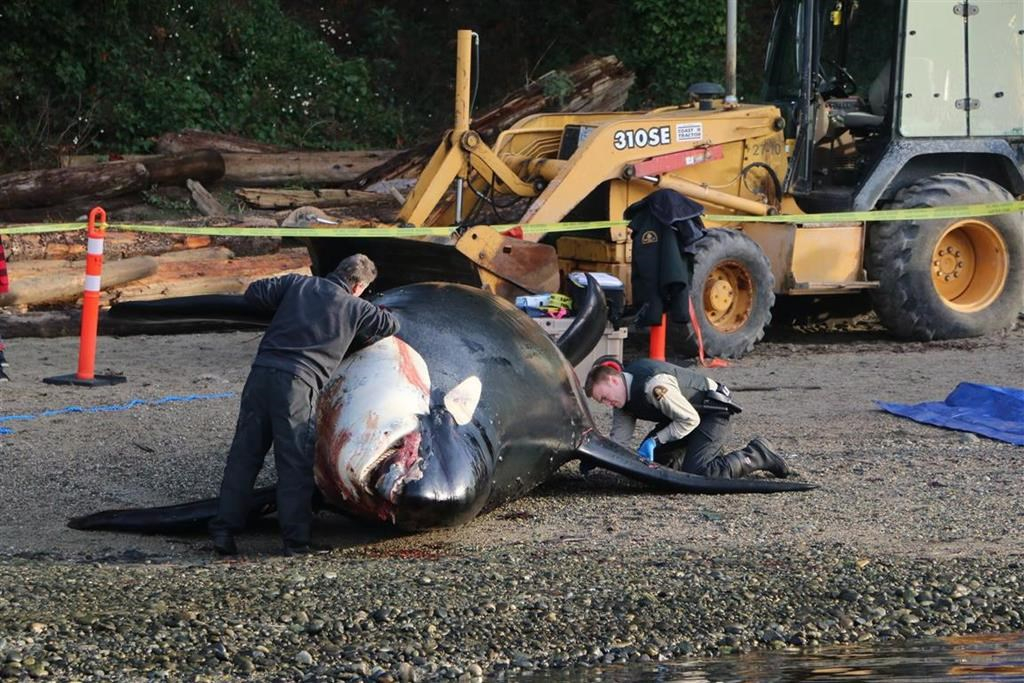 A male orca found dead on the shores of British Columbia had suffered a blunt force trauma to the head, officials said on Thursday. Photo by The Canadian Press
Previous story

A necrospy on an endangered killer whale found floating off the coast of British Columbia showed the animal had blunt-force trauma to its head and neck, officials say.

The male orca, found in the water off the Sunshine Coast north of Vancouver on Tuesday, also had a hematoma, indicating it was alive for a time after the injury, said Paul Cottrell, Pacific marine mammal co-ordinator with Fisheries and Oceans Canada.

He said the damage may have been caused by a vessel strike or other "heavy contact," but investigators are waiting on tissue tests and other results to determine exactly what happened.

"I think as we get more information back from the necropsy, it'll help inform us going forward, for sure," Cottrell said.

Investigators have also taken the animal's skull to Vancouver, where a CT scan will be done to determine whether there were any fractures as a result of the blunt-force trauma.

The 18-year-old orca, known as J34, was part of the endangered southern resident killer whale population, which live in the waters off southern British Columbia and Washington state.

At least three other animals in the group have died this year, including a calf, a 23-year-old female called J28 and a male known as L95. Cottrell said there are now 79 whales left in the population.

The Center for Whale Research in Washington state said in a news release it has been voicing concerns for over a decade that the endangered whales are not getting enough salmon for their survival.

"We reported that J34 was looking skinny this past summer," it said.

Cottrell said the necropsy showed the almost seven-metre-long orca was in overall good condition with a thick layer of blubber.

There's a lot of research going on to help protect the southern resident killer whales, and J34's death will likely help that work progress, he said.

"There's a big effort going on and of course, when we get a fresh carcass where we can get more information on cause of death and the details around that, we want to know what happened and why, and if it's a human-caused issue, how we can mitigate that going forward is really important."

The Sechelt First Nation, which helped retrieve the whale's body, will keep the skeleton and plan to display it in the future, Cottrell said.

But first the carcass will be left outside for about a year so various organisms can strip it of all organic matter, he explained. Once clean, the bones will be reassembled and displayed.

"This is a beautiful specimen, 18 years old, in the prime of his life. His teeth and everything were in great shape. So this will be a great specimen for display," Cottrell said.

Governments are repeating the

Governments are repeating the "study" mantra as if it is synonymous with acting to save these critically endangered species. It isn't. There is a maximum of 79 Orcas left and at least 6 members died this year. Over 14% of the entire remaining population! That level of attrition should be national headlines, with the Federal Government issuing emergency orders to curtail the noise and harrassment of boats, and protect vital food souces. As is required by Endangered Species act. Instead, they are busy approving Pipelines, LNG plants, and pandering to donors at private dinners. Worry not, they are "studying" ways to make ships quieter and less harmful in the future, so every cetacean dead by ship strikes is great information. The plan is obviously to let Resident Orcas, Woodland Caribou in Alberta, and other inconvenient species die out "for the good of the country" so the boreal forest can be completely clear cut and fracked, while the Salish Sea becomes a freeway for supertankers. I so want to be proven wrong, but my nightmares are becoming reality.