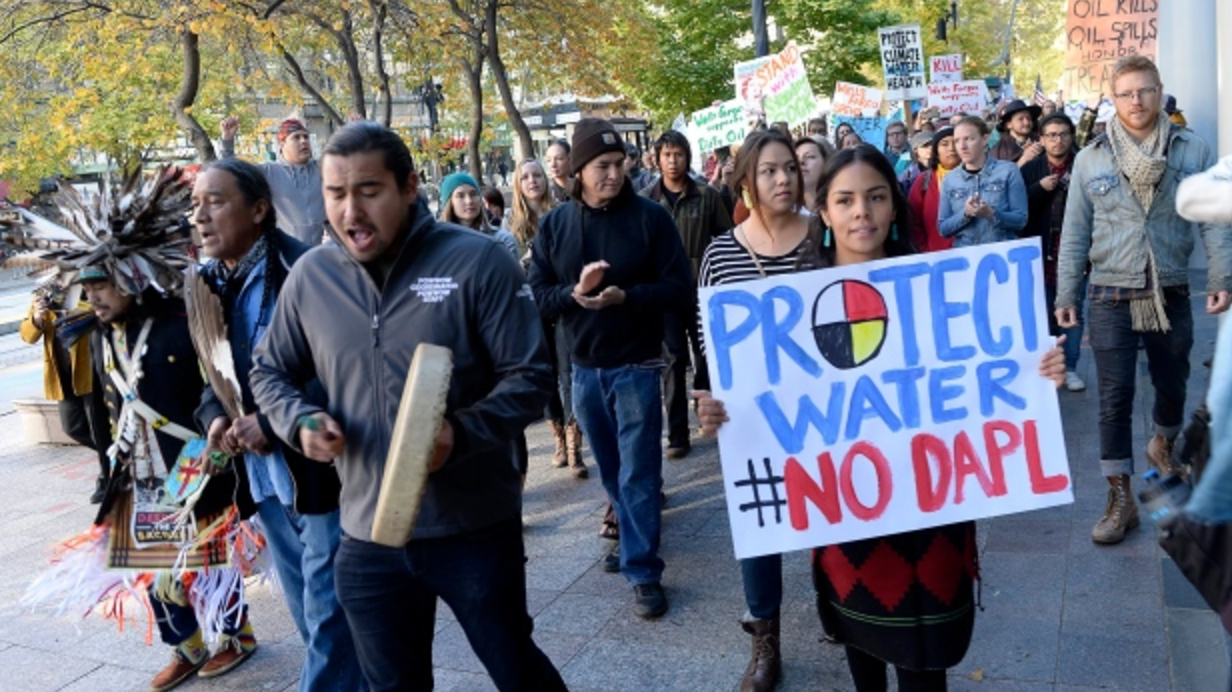 President Donald Trump moved to advance construction of the Keystone XL and Dakota Access oil pipelines Tuesday, along with signing a notice requiring the materials for the pipelines to be constructed in the United States.

"From now we are going to start making pipelines in the United States," Trump said from the Oval Office, confirming rumours that he would advance the controversial projects sometime that day.

Former President Barack Obama stopped the proposed Keystone XL pipeline in late 2015, declaring it would have undercut U.S. efforts to clinch a global climate change deal that was a centerpiece of his environmental legacy. The pipeline would run from Canada to U.S. refineries in the Gulf Coast. The U.S. government needed to approve the pipeline because it crossed the border.

Separately, late last year, the Army Corps of Engineers declined to allow construction of the Dakota Access pipeline under Lake Oahe, saying alternative routes needed to be considered. The Standing Rock Sioux tribe and its supporters say the project threatens drinking water and Native American sites, though Energy Transfer Partners, the company that wants to build the pipeline, disputes that and says the pipeline will be safe.

The pipeline is to carry North Dakota oil through South Dakota and Iowa to a shipping point in Illinois.

In Canada, environmental groups have said that just because the Keystone XL pipeline has support south of the border, doesn't mean the project will ever break ground. Prime Minister Justin Trudeau has also supported the Canada-U.S. pipeline, but organizers at 350.org have said lawsuits and civil resistance could stop it in its tracks.

"It's a dark day for reason, but we will continue the fight," said 350.org co-founder Bill McKibben. "This is not a done deal. The last time around, TransCanada was so confident they literally mowed the strip where they planned to build the pipeline, before people power stopped them. People will mobilize again."

“Indigenous peoples, landowners, and climate activists did everything in our power to stop Keystone XL and Dakota Access, and we’ll do it again," added executive director May Boeve. "These orders will only reignite the widespread grassroots opposition to these pipelines and other dirty energy projects. Trump is about to meet the fossil fuel resistance head on.”

Last year, more than 120 indigenous nations across North America — including the Standing Rock Sioux in North Dakota, the Lummi Nation in Washington, and the White Earth Nation in Minnesota — signed a pan-continental treaty against oilsands expansion. By standing together, they hoped to ensure that dangerous projects are not able to escape by using alternative routes.

These nations are currently fighting pipeline projects like Kinder Morgan's Trans Mountain expansion and Enbridge's Line 3 project. Greenpeace Canada has vowed to stand with them in the battle against both KeystoneXL and the Dakota Access pipeline, when the time comes.

“We all saw the incredible strength and courage of the water protectors at Standing Rock, and the people around the world who stood with them in solidarity," said Greenpeace executive director Annie Leonard. "We’ll stand with them again if Trump tries to bring the Dakota Access Pipeline, or any other fossil fuel infrastructure project, back to life."

Supporters of the Keystone XL pipeline argue that if constructed, it would create thousands of temporary and permanent jobs, and bring in $8-million a year in property taxes and $6.5-million per year to Canada. As news of its revival in the U.S. broke on Tuesday morning, the value of Canada's loonie leapt by one U.S. cent, indicating that money traders still see pipeline projects as a valuable currency.

Trump has moved swiftly in his first week of office to make good on some of his core campaign pledges he says are aimed at creating jobs and growing the economy. On Monday, he signed a memorandum withdrawing the U.S. from the Trans−Pacific Partnership trade pact, a proposed accord with 11 Pacific Rim countries and another of Obama’s prized accomplishments.

"Great thing for the American worker what we just did," Trump said as he signed the order in the Oval Office.

Yet even as Trump moves to implement his agenda, he is still making false claims.

During a reception with lawmakers at the White House Monday evening, Trump claimed the reason he’d lost the popular vote to Democratic rival Hillary Clinton was that 3 million to 5 million immigrants living in the U.S. illegally had voted. That’s according to a Democratic aide familiar with the exchange who spoke on condition of anonymity to discuss the private meeting.

There is no evidence to support Trump’s claim. He made a similar statement on Twitter in late November that he had won the Electoral College in a "landslide" and "won the popular vote if you deduct the millions of people who voted illegally." Clinton won the popular vote by nearly 2.9 million votes but lost the electoral contest.

Trump’s assertion appears to be part of a continuing pattern for him and his new administration in which falsehoods overshadow his outreach efforts.

On Tuesday, Trump summoned the heads of the big three American automakers, General Motors, Ford Motor Co. and Fiat Chrysler, for a breakfast meeting at the White House. He pledged to scrap regulations and reduce taxes on corporations that keep jobs in the U.S., though he did not specify his plans for either.

His administration, he said, will "go down as one of the most friendly countries" for business.

Trump’s actions signal a reset after a tumultuous weekend dominated by his and his spokesman’s false statements about inauguration crowds and their vigorous complaints about media coverage of the celebrations. While Trump’s advisers have long accepted his tendency to become fixated on seemingly insignificant issues, some privately concede that his focus on inauguration crowds was unhelpful on the opening weekend of his presidency.

In addition to his executive action on TPP, Trump signed memorandums freezing most federal government hiring — though he noted an exception for the military — and reinstating a ban on providing federal money to international groups that perform abortions or provide information on the option. The regulation, known as the "Mexico City Policy," has been a political volleyball, instituted by Republican administrations and rescinded by Democratic ones since 1984.

The actions were among the long list of steps candidate Trump pledged to take on his opening day as president. But other "Day One" promises were going unfulfilled, including plans to propose a constitutional amendment imposing term limits on members of Congress and terminating Obama’s executive actions deferring deportations for some people living in the U.S. illegally.

Editor's Note: This story was updated at 12 p.m. Eastern Time on Tues. Jan. 24 to reflect a breaking news update and include comments from environmentalists.

Trump owns shares in Dakota Access Pipeline and never provided any proof they were sold. Actually he's never provided proof that supports ANY of his claims, so every word he says must be assumed to be a lie unless proven otherwise. Refusing to divulge his tax returns, list of creditors (Russia and worse?), investments, as well as the 300+ business he is reported to own in part or full, means that he will be able to bypass the anti-corruption safeguards in place and enact government decisions to directly enrich himself. His "day 1" action to stomp all over the civil liberties and rights of Tribes and protesters by signing an Executive Order approving DAPL. He is demonstrating why it is very risky to give such power to one person by his anti-abortion, pro-coal and abandoning climate change agreements. I hope the rising seas take all his properties first...

The complicity of our federal

The complicity of our federal government and the efforts to cozy up to the bully are shocking. Both because of the impacts on climate change and because shouldn't get in bed with evil for a few dollars. We need to distance Canada from the bully to the south.