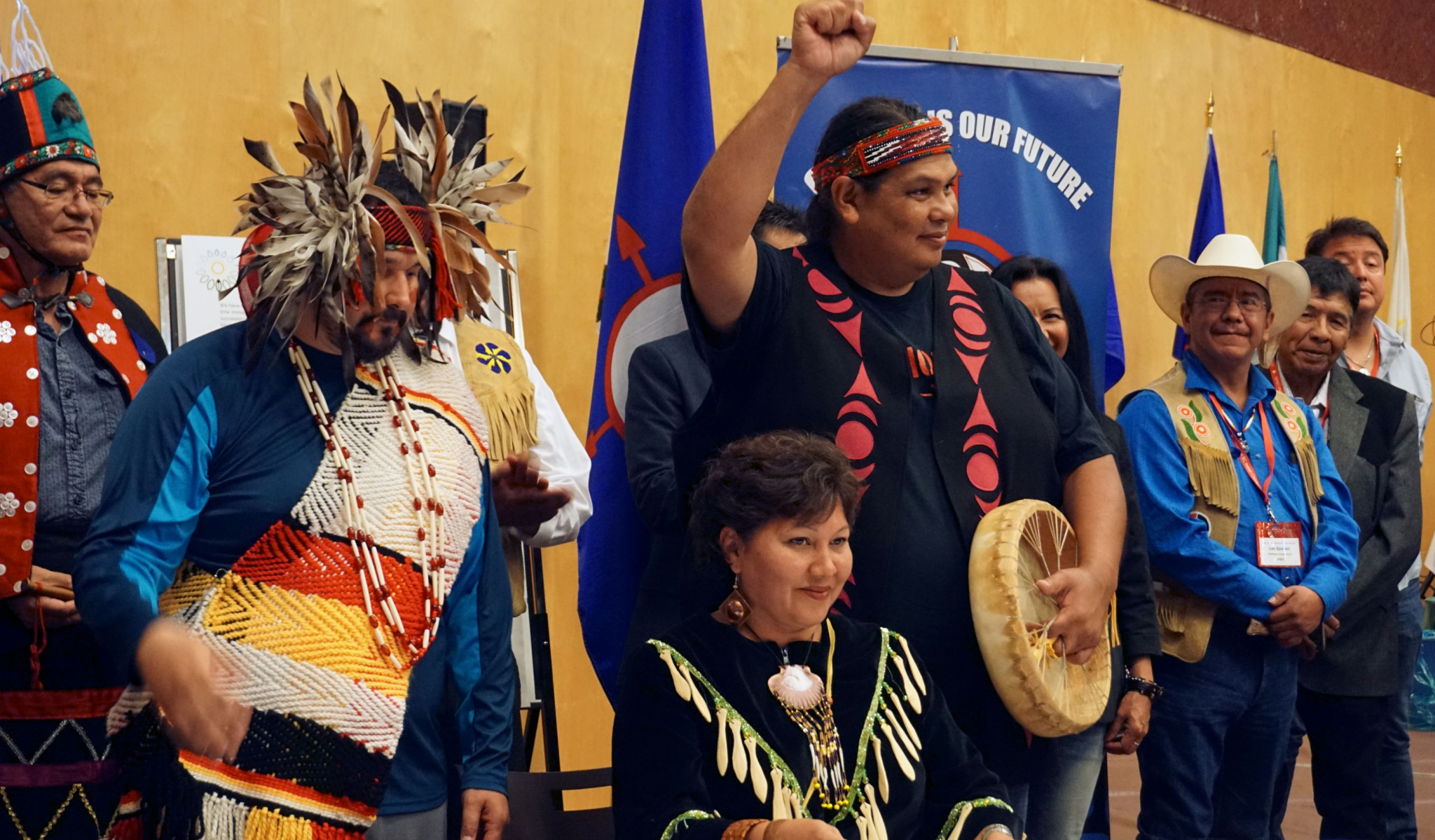 The thunderous pounding of Indigenous drums echoed in the air on Thursday as more than 50 Indigenous nations across North America rallied together to sign a historic, pan-continental treaty alliance against oilsands expansion in their traditional territory.

At the signing on Musqueam land in Vancouver, the lineup of chiefs waiting to put their names down filled up an entire room. It was a powerful ceremony, and participants clad in the regalia of their nations travelled from across B.C. and northern Washington to be part of the growing movement.

Grand Chief Stewart Phillip of the Union of BC Indian Chiefs, who also signed the document, said Indigenous people will no longer stand for dangerous projects on their territory that advance the threat of climate change.

"In this time of great challenge we know that other First Nations will sign on," he said, extending the invitation to Indigenous communities far and wide.

"Based on our sovereign, inherent right to self-determination, we have collectively decided that we will pick up our sacred responsibilities to the land, waters, and people. We will come together in unity and solidarity to protect our territory from the predations of big oil interests, industry, and everything that represents."

It's a movement that's already happening, he added, with no better example than in North Dakota, where the Standing Rock Sioux have forced the federal government to pause Dakota Access pipeline construction.

The document, called the Treaty Alliance Against Tar Sands Expansion, commits its signatories to assist one another when called upon in the battle against oilsands expansion, and to work in partnership to move society towards more sustainable lifestyles. By aligning themselves with other Indigenous nations across Canada and the northern U.S., participants hope to ensure that dangerous projects are not able to "escape" by using alternative routes.

“We have the right and the responsibility to stop these major threats to our lands, our waters and our peoples,” said Kanesatake Grand Chief Serge Simon. “For example, from Quebec, we will work with our First Nation allies in B.C. to make sure that the Kinder Morgan pipeline does not pass, and we know they’ll help us do the same against Energy East.”

It comes not only from a legal and cultural responsibility to protect their land, water, air, and climate from harm, said Grand Chief Derek Nepinak of the Assembly of Manitoba Chiefs, but a desire to safeguard a future for all peoples, Indigenous and non-Indigenous as well.

“We want to work with the Prime Minister and the government to develop a sustainable economy that does not marginalize our people,” he said. “This is a time of great spiritual awakening for our peoples as we reinvigorate our Nations and ensure a better tomorrow for all.”

While First Nations, environmentalists and other key stakeholders across North America argue that pipelines, tankers, and oil by rail increase the risk of catastrophic oil spills, threaten critical marine and terrestrial ecosystems, and put international climate targets out of reach, energy companies argue that they will revitalize struggling Canadian economies by bringing energy to overseas markets.

The energy companies also argue that their proposed projects promote responsible resources development. The Canadian Association of Petroleum Producers however, Canada's largest oil and gas lobby group, said the Treaty Alliance will not change the way its members do business with Indigenous communities.

Oil and gas industry to carry on

"Our member companies work with First Nations and Metis communities all the time, regularly, and have a long history of doing that," said Brian McGuigan, CAPP's manager of aboriginal policy. "We'll continue to work with them. Members work with them everyday and have very positive relationships... It's not always easy conversations, but they continue the dialogue."

He would not comment on whether he felt the newly-signed document would hinder CAPP's goal of getting Canadian oil to tidewater.

The new treaty builds on a series of major First Nations victories against oilsands expansion projects, including a Federal Court of Appeal decision in June that overturned the Harper government's approval of the Enbridge Northern Gateway project, and rallies across the continent that contributed to U.S. President Barack Obama's decision to kill the Keystone XL pipeline.

American signatories to the treaty include the Standing Rock Sioux, who are fighting Dakota Access Pipeline, the Lummi Nation in Washington, which is currently fighting the Trans Mountain expansion, and the White Earth Nation in Minnesota, which has launched a legal complaint against the Enbridge Line 3 program. Canadian signatories include B.C.'s Katzie First Nation, Tsleil-Waututh Nation, Carrier Sekani Tribal Council, Wet'suwet'en First Nation, and Heiltsuk First Nation, among others.

Here's what the treaty says:

"Therefore, our Nations hereby join together under the present treaty to officially prohibit and to agree to collectively challenge and resist the use of our respective territories and coasts in connection with the expansion of the production of the Alberta Tar Sands, including for the transport of such expanded production, whether by pipeline, rail or tanker.

As sovereign Indigenous Nations, we enter this treaty pursuant to our inherent legal authority and responsibility to protect our respective territories from threats to our lands, waters, air and climate, but we do so knowing full well that it is in the best interest of all peoples, both Indigenous and non-Indigenous, to put a stop to the threat of Tar Sands expansion.

We wish to work in collaboration with all peoples and all governments in building a more equitable and sustainable future, one that will produce healthier and more prosperous communities across Turtle Island and beyond, as well as preserve and protect our peoples’ way of life."

WATCH: The signing ceremony in Vancouver

Indigenous chiefs from across B.C. sign a pan-continental Treaty Alliance Against Tar Sands Expansion in Vancouver on Thurs. Sept. 22, 2016. Video by Elizabeth McSheffrey.

Puma Creepers Schwarz Amazon
A significant hint to think about in relation to network marketing is the fact you can evaluate yourself to others' accomplishment for objective-setting uses only. In no way judge your own achievement on others, although. It is an essential morale contractor simply because you are in your own special condition with your own individual hurdles.

Prior to negotiate an industrial real estate property hire, you need to be confident you are able to repair and restore the region. This is because simply because this will give you the ability to do improvements all by yourself instead of relying on the landlord to accomplish the repairing and rebuilding for you personally.