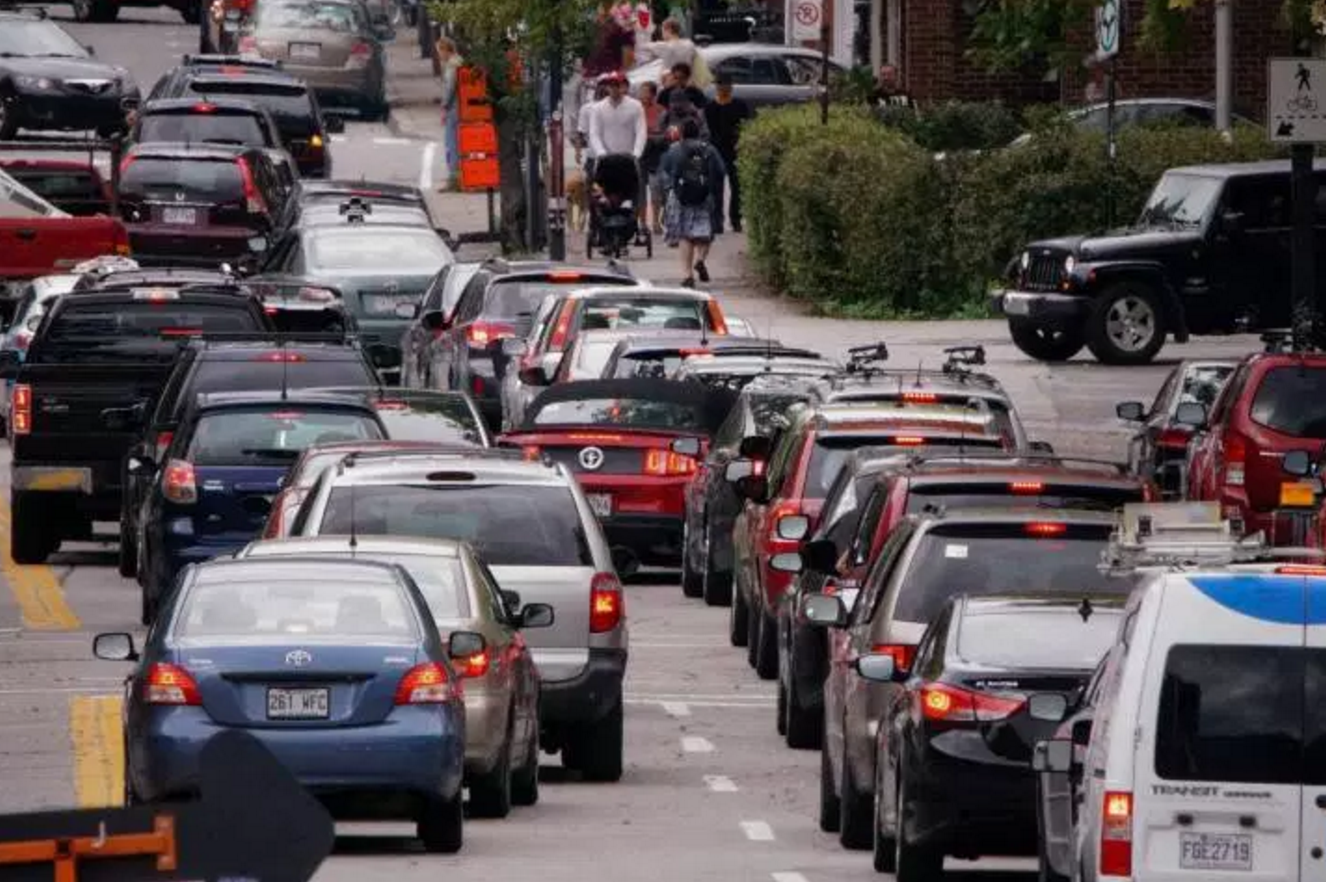 Montreal commuters suffer from the third worst traffic congestion in Canada according to a new CAA report. File photo by Canadian Press
Previous story
Next story

The report, published on Jan. 11, called "Grinding to a Halt, Evaluating Canada’s Worst Bottlenecks," was proudly touted by the CAA as a "first of its kind study" proving that Canada's top 20 most congested traffic bottlenecks collectively cost drivers more than 11.5 million hours, and drain an extra 22 million litres of fuel per year.

As a transit planner, it seems to me that the report is intended to spur urban highway expansion that would undermine the new Pan-Canadian Framework on Clean Growth and Climate Change. It implies that wider highways are an effective way to reduce greenhouse gas (GHG) pollution.

While claiming that pollution would be reduced if bottlenecks were broken, the CAA does not acknowledge the inevitable increase in pollution if roads are widened to break bottlenecks. Studies show wider roads lead to increased traffic.

The CAA’s spokespeople have been careful to suggest a variety of ways of dealing with these ‘bottlenecks,’ including road expansion and tolling. But they have not identified the actions, such as road expansion, that increase climate pollution. The report touts the expansion of the QEW highway, which runs west of Toronto towards Hamilton, as a good way to deal with traffic congestion (and by implication, a good way to reduce GHG pollution).

Yet neither the report, nor the accompanying media release mentions improving public transit as a way of responding to congestion and the climate crisis.

One of the so-called ‘bottlenecks’ featured in the report is West Georgia Street in Vancouver. West Georgia is in fact a carefully controlled metering point that helps Vancouver manage downtown traffic and meet its climate objectives, not a random bottleneck. A metering point is a place where the volume of traffic is limited through road design or traffic signal timing to prevent congestion in other areas.

Gordon Price, former Vancouver city councillor and head of the Simon Fraser University City Program, asserts that this metering point allows vehicles to be “filtered onto the downtown peninsula in manageable quantities by the signal system. Otherwise, cars would congest where the damage would be maximized — on the complex grid of downtown streets.”

The City of Vancouver is renowned for the quality of life in its freeway-free downtown core where the majority of people travel by public transit, walking and cycling.

Some media outlets responded to the report with balanced stories, including the possibility of improving public transit.

Others uncritically repeated the misinformation in the CAA report. An article in the Surrey Leader, for example, used data from the study to make the ridiculous claim that replacing the four-lane Massey Tunnel with a controversial 10-lane bridge could “reduce carbon dioxide emissions by 255,000 kg each year.”

In an email response to the author of the story, Kristine D’Arbelles, CAA’s Manager of Public Affairs said the study did not consider the effects of highway expansion on GHG pollution. “When our study says ‘alleviating this bottleneck would reduce carbon dioxide emissions by 255,000 kg each year,’” she wrote, “that calculation does not take into consideration any increase in demand if a road is widened. This would require travel demand modelling, which is outside the scope of this study.”

D’Arbelles declined to comment on CAA’s position, or lack thereof, regarding action to reduce GHG pollution from transportation.

You can't build your way out of congestion

Decades of experience and studies show that the cliché, “you can’t build your way out of congestion” is correct, and the CAA is wrong about any need for “travel demand modelling.” New highway capacity is quickly filled with more cars burning more fuel and belching out more CO2 in wider traffic jams.

In a 2007 study, Clark Williams-Derry, research director of the SightLine Institute, estimated that “considering the increased emissions from highway construction and additional vehicle travel, adding one mile of new highway lane will increase CO2 emissions by more than 100,000 tons over 50 years.”

Over the past decades, federal and provincial governments have responded to pressure from groups like the CAA and funded transportation infrastructure with little or no regard for climate pollution. They spend billions of our public dollars every year on urban highway expansion.

Largely as a result of this spending, between 1990 and 2014 climate pollution from transportation increased 32 per cent in Canada. Transportation is now the second largest source of GHGs.

The CAA’s executives are swimming against the tide on climate action in Canada (although they are well aligned with U.S. President Donald Trump’s oily agenda).

The world has "better ideas" than freeways

In April, MPs voted to pass Liberal MP Andy Fillmore’s private members bill to analyze the greenhouse gas impact of every infrastructure funding proposal over half a million dollars, and for giving funding priority to projects that reduce climate pollution. In a presentation to the Green Jobs BC conference in November, Jonathan Wilkinson MP, parliamentary secretary to Environment Minister Catherine McKenna, said the federal government now has a “strong preference for public transit over building of new highways.”

In December, Prime Minister Justin Trudeau and most of Canada’s premiers signed the Pan-Canadian Framework on Clean Growth and Climate Change which includes a “shift from higher to lower-emitting types of transportation, including through investing in infrastructure.” The examples include shifting from driving to transit and cycling as well as shifting freight from trucks to rail. The Framework is Canada’s plan to meet greenhouse-gas-emission reductions committed under the United Nations accord reached in December 2015 in Paris.

This new climate test for government spending in Canada is a big deal. But if the idea was adopted and applied rigorously in India, China and other countries the effect would be enormous.

In the U.S. and U.K., there are ethical roadside assistance programs for people who object to the pro-road expansion policies of their respective automobile associations. The alternatives in Canada seem limited to roadside assistance and towing coverage offered by banks, big box stores, and automotive chain stores. Anything is better than the CAA, but perhaps the best ethical option in Canada is paying for a tow truck if and when you need one.

The CAA claims to have 6.1 million members through nine affiliates across the country, from the BCAA to CAA Atlantic. If you are one of these members, please consider cancelling your membership and writing to the CAA to explain why you are doing so.

Chopping up your CAA card is one of the most effective climate actions you can take. It might help get better transit in your neighbourhood too.

Here are the "meanest" and "greenest" cars for the environment

Highway expansion CAN dramatically reduce climate pollution on cross-Canada routes. It's not about congestion, it's about more direct routes than the paths we made into roads, as automobiles appeared on the scene so long ago.

If we had a highway from Montreal to Winnipeg that followed the rail route built across northern Ontario a century ago, the road distance would be about 200 km shorter than by the (only) Trans-Canada route that zig-zags north of Superior.

We need leaders with the vision to build more efficient road transportation. Canada is a third-world country when it comes to interprovincial highways.

That might not be a bad idea, but I'd rather use that money for high speed rail like they have in Europe, Japan and China. A 300 kph rail line would make the trip between Montreal and Winnipeg in 6 or 7 hours.

The CAA should do a little

Natural Resources Canada (NRC), "Emission impacts resulting from vehicle idling" (2016): " Each litre of gasoline that is used produces about 2.3 kg of carbon dioxide (CO2), the principle GHG linked to climate change...One simple and effective way to reduce the production of CO2 emissions from light-duty vehicles is by choosing to eliminate unnecessary vehicle idling...In fact, if Canadian motorists avoided idling for just three minutes every day of the year, CO2 emissions could be reduced by 1.4 million tonnes annually. This would be equal to saving 630 million litres of fuel (or $630 million at $1/litre) and equivalent to taking 320,000 cars off the road for the entire year. Eliminating unnecessary idling is one easy action that Canadians can take to reduce their GHG emissions that are contributing to climate change."
Choice of vehicles and avoiding unnecessary idling are good easy steps to help reduce the environmental impact of vehicles. After all, idling gets you nowhere!