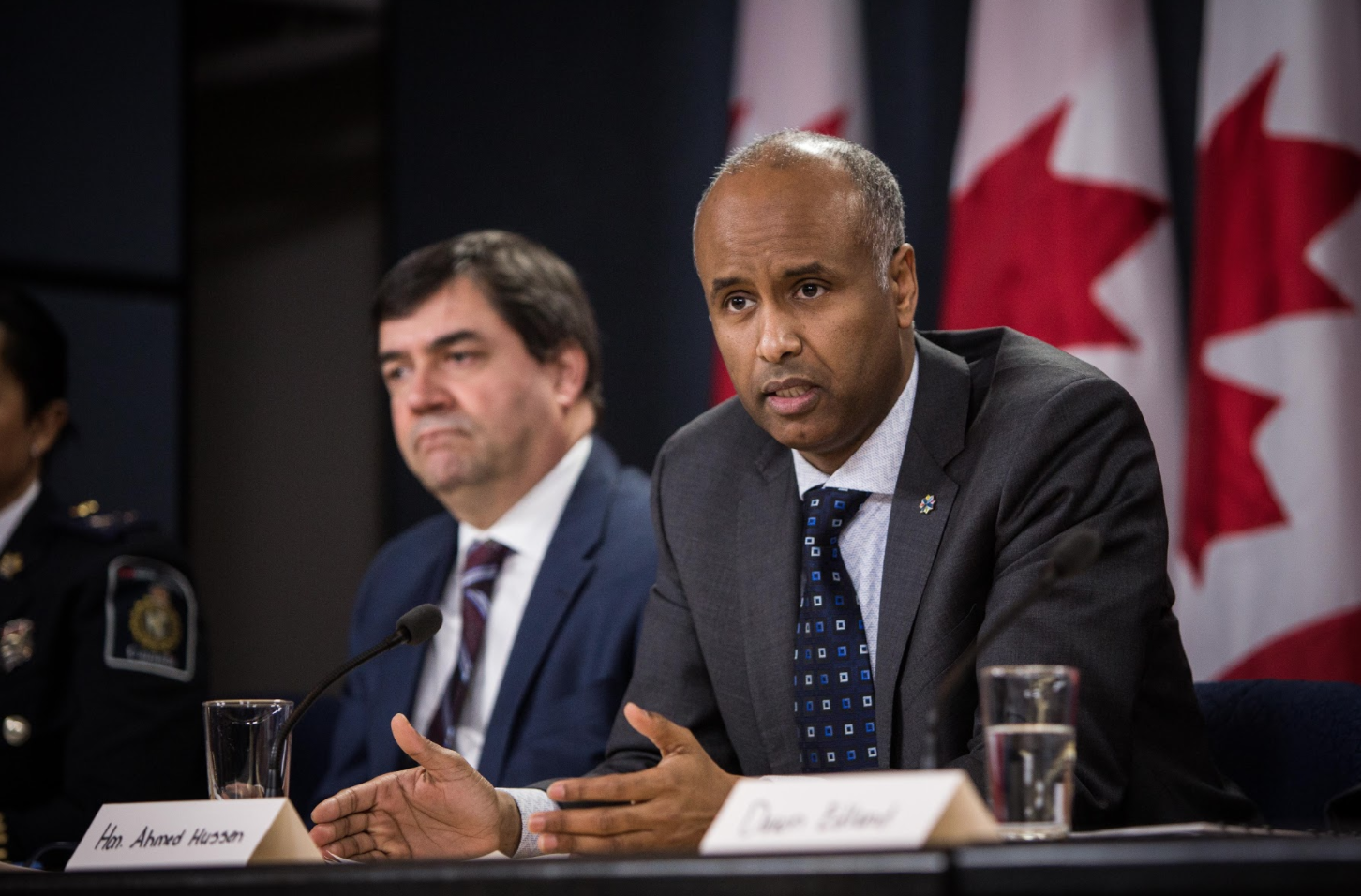 During a last-minute press conference on Sunday afternoon, Immigration Minister Ahmed Hussen said Canada has been assured by the White House that they can enter the U.S. provided they have a valid Canadian permanent resident card and a passport from one of the seven countries affected.

"It's a very fast-changing situation, there's a lot of moving parts," he told reporters. "As we monitor the situation... we will be coming up with policy options to look at our response to these changes, however, for now, the parameters of the agreement are in place."

Dual citizens with a Canadian passport are also allowed into the U.S., but should travel with their Canadian identification, he added. More than 35,000 Canadian citizens hold dual citizenship from one of the countries identified in the executive order: Iraq, Iran, Sudan, Somalia, Syria, Yemen, and Libya. He encouraged anyone who experiences problems to contact Canada's consular assistance.

It was initially unclear Saturday whether Canadians who are also citizens of the affected countries would be allowed to cross the U.S. border, as the State Department said dual citizens were included in the ban. Hussen said his department had been in contact with American officials throughout the weekend.

Daniel Jean, Canada's national security adviser, said the government was not consulted on the executive order before it was signed. In fact, he said, he found out about it through media reports. He said he doesn't think the American government understood all of the "consequences" of its wide-reaching ban before the order was signed and confirmed that Canadian dual citizens were not the initial target of the executive order, despite the confusion.

Hussen said Canada will provide temporary shelter to any people stranded in the country because of the ban, but noted that there are currently no people stuck in Canadian airports. Global Affairs Canada has not received any requests for consular assistance to date, he added.

"Let me reiterate Canada's perspective," he said. "Immigration continues to play a clear role in contributing to Canada's well-being, to our economic prosperity, and to our success as a nation. We are confident in our programs and will continue to ensure our immigration system is about compassion, efficiency, economic opportunity, and protection of the health, safety and security of Canadians."

Hussen declined to answer questions about his personal feelings towards the ban, having immigrated to Canada from Somalia, one of the seven affected countries. Neither he nor Jean would offer perspective on whether they thought the order was "racist," and Hussen repeated how proud he is to be Canadian.

He echoed the sentiments of a Tweet sent by Prime Minister Justin Trudeau over the weekend and welcomed all refugees fleeing persecution and other threats in their own country. It does not appear as though Canada has altered its refugee targets for 2017 as a result of immigration activities in the U.S. and will still aim to resettle 25,000 people this year.

Over the weekend, the federal NDP Party called on the Trudeau government to take part in an emergency debate on the U.S. travel ban to address its far-reaching implications on global travellers and Canadians. Hussen would not commit to participating, but said the government remains "open" to all suggestions from all parties on the issue.

“This ban will have disastrous implications for thousands of innocent travellers, family members, students, business people, indeed travellers of all kinds, but most disturbingly, the men, women and children who are seeking asylum and fleeing persecution," NDP critic for immigration, citizenship and refugees, Jenny Kwan, wrote in a letter to the Speaker of the House of Commons on Sunday morning.

"It is unclear exactly how many persons living in Canada are affected by this ban but several hundred thousand Canadians of dual citizenship and those born in countries under the ban are extremely concerned by these developments and others such as permanent residents, may be severely impacted."

The ban does not affect American green card holders, Hussen explained, but it does affect citizens of the seven affected countries who are transiting through Canada. The U.S. State Department will shortly provide further clarification to the public.

Editor's Note: This story will be updated as more information becomes available

OMG, I remember when

OMG, I remember when apartheid South Africa made Japanese people had "honorary white status." That, of course, was because SA businesses saw they could make a lot of money if they partnered with Japanese corporations. Funny how free flow of corporate capital and workers happens when big business wants to make a buck off those people. Our government promotes their efforts as a human rights, progressive, issue. They will never say their work ensures the profits of the trans-national corporate interests. This government is most properly referred to as 'progressive neoliberal.'