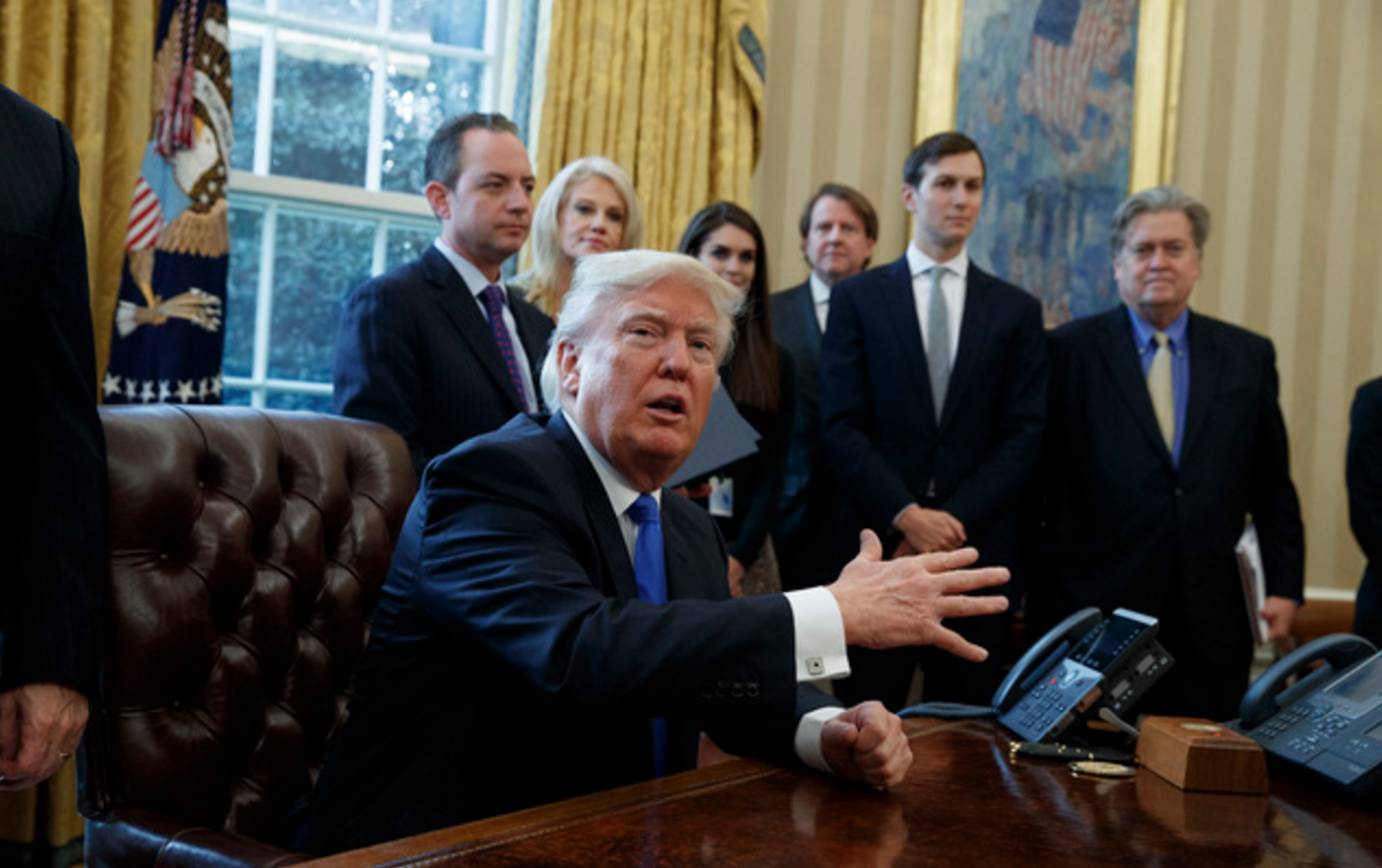 President Donald Trump meets with advisors in the Oval Office during the first few weeks of his presidency. File photo by Associated Press
Previous story
Next story

Canadian journalists are offering their U.S. colleagues some good advice on how to deal with President Trump’s media hostility and bald-faced lies, based on their experience covering former prime minister Stephen Harper and the late former Toronto mayor Rob Ford.

To understand the method behind Trump's madness, however, we have to recognize that when the bombastic Republican businessman threw out the rule book on conventional politics, he picked up the climate denial playbook.

Many of the ‘fake news’ tricks and post-truth politics that helped propel Trump to the White House were invented in the climate wars: Making stuff up to advance one's interests, creating an echo chamber to repeat those claims, attacking the credibility of institutions designed to separate fact from fiction, and claiming that the wealthy and powerful are political underdogs besieged by tyrannical ideologues.

This was the modus operandi of the climate denial machine created and financed by oil and coal companies, like Exxon, Koch Industries, and Canada's own Talisman Energy. It was devastatingly effective at delaying action on climate change — often with the assistance of a credulous mainstream media who now face similar tools turned against them.

A cabinet full of climate deniers

So what lessons from the 25-year battle against organized climate denial can be applied to Trump's tricks on other policies?

Don’t give the lies unwarranted air time: The media’s cultural norm of ‘show both sides’ meant that they gave deniers equal billing with the scientific consensus as if there were two equally compelling arguments. If he is lying then say it is a lie, not that it is a claim that some expert doesn’t agree with.

Defend science: We can’t proceed as if one more scientific study or media fact-check will convince his supporters that the emperor has no clothes. The problem is not a lack of information, but what social scientists call ‘motivated reasoning.' It's the unconscious tendency to process information so the conclusions fit what we want to believe, and reject information that challenges our group identity (something we all do). Scientific institutions are designed to help us overcome that tendency, which is why attacks on science and expertise are such a big part of the climate denial / Trump / Brexit strategy.

Show who really benefits: Trump has positioned himself as an outsider, a brilliant business man who will negotiate a better deal for the little guy. Just as the climate denial machine went off the rails (in most places) once it was shown to be a creation of the oil and coal companies, we need to show who really benefits from Trump’s policies.

Love trumps hate: The seeds planted by climate deniers and Trump fell on fertile ground because significant numbers of people wanted to believe what they were saying. Rather than explaining why their fears and concerns are groundless or attacking them, acknowledge the fear and advance solutions. On climate change, I’d rather not believe it myself: the problem is so big and so embedded in our everyday lives that no individual can solve on their own. Hence it is much easier to believe it’s a socialist hoax than to imagine how we could work together to solve it. Empathy won’t work for everyone, but it might work for enough to tilt the scales.

No silver linings in Trump’s storm clouds: While we can reach out to people who have bought into Trump lies, we shouldn’t co-operate with the man himself or his team (who know exactly what they are doing). It can be tempting to try to find a way that we can work with someone like Trump, in the hopes of blunting some of the worst impacts in our particular area of concern. To do so is to normalize what he is doing as acceptable, and it’s not. As the Greenpeace USA banner hung in sight of the White House said: Resist.

Keith Stewart has been working on climate change for over 20 years. He is a senior energy strategist for Greenpeace Canada and teaches energy and environmental politics at the University of Toronto.

Exactly. When we stopped

Exactly. When we stopped calling liars liars, and started acting as if they were honest folks marching to a different drummer....when we lost track of objective reality and started believing we could believe whatever we preferred to believe.........we participated in creating a tower of babel in which truth itself became suspect, if not irrelevant.

It's time to return to the bluntness of my father's time...where the real liars were 'goddamn liars' and any farmer could tell them so. Rex Tillersen is such a scoundrel, if he can claim to know nothing about climate change or Exxon Mobil's roll in spending trillions to produce the junk science that tried to refute climate reality...and succeeded in befuddling the issue for decades.

Let's start repenting our collective cowardice by calling the new secretary of state what he is. A God Damned liar. Climate change should scare us....not that little equivocator.