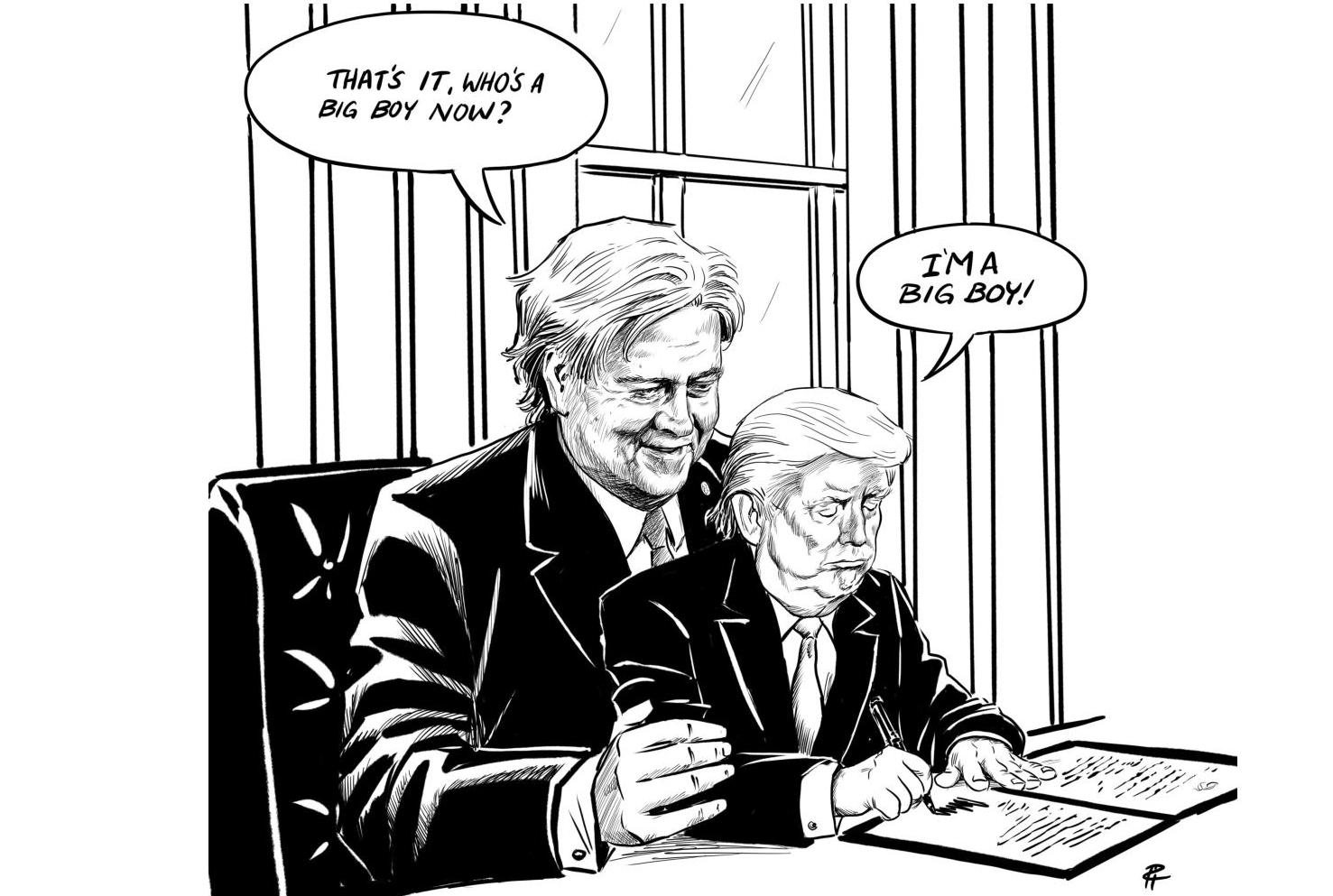 The core principle of a constitutional democracy, for which countless numbers have made the ultimate sacrifice, is the supremacy of its constitution.

Sally Yates, the former acting attorney general in Washington, D.C., expressed it succinctly in 2015, when questioned by Jeff Sessions, the current nominee.

Jeff Sessions grilled Sally Yates on her duty to follow the law during a 2015 hearing https://t.co/gi7gqNyk8w pic.twitter.com/nvavT6OcQH

As she swore in her oath to "preserve, protect and defend the Constitution," Yates refused to support an unconstitutional presidential order, and promptly walked the plank. Within hours, she was fired via a White House announcement that contained unhinged language more suited to official communiqués in North Korea.

"The acting Attorney General, Sally Yates, has betrayed the Department of Justice by refusing to enforce a legal order designed to protect the citizens of the United States...," said the White House on Monday. "Ms. Yates is an Obama Administration appointee who is weak on borders and very weak on illegal immigration."

Defiance of the rule of law is the calling card of the despot, the warlord, the police state. It's a card Donald Trump seems perfectly willing to play, dealt by his political Svengali, the racist and extremist Stephen Bannon.

And so America finds itself pitched headlong into a constitutional crisis: As the media camera flicks on to the next sensational tantrum, the next image, the next gratuitous brawl, the damage inflicted on American democratic institutions endures.

In the months and years ahead we will understand better what this was all about. We’ll know if the weekend of Jan. 27, 2017 foreshadowed a diabolically brilliant palace coup, or marked the stumbling face-plant of a colossally inept presidency. There’s not much room in between.

But on that Friday, and the days following, travellers carrying valid entry visas winged through silent peaceful skies toward America — into chaos and pandemonium. They were met by Customs and Border Protection officers who casually trampled their rights, handcuffed them (including the elderly and children), placed them under detention, refused them access to attorneys, and in some cases, allegedly unlawfully cancelled their visas and sent them back.

For much of the weekend, those officers appeared to operate entirely extra-judicially, possibly in defiance of court orders. They obstructed attorneys and refused to meet congressmen seeking information.

As teeming throngs of protesters gathered outside airports across the country, no fewer than five federal court judges across the country temporarily stayed the provisions of the ban. Even through this clear rebuke, the Customs and Border Protection officers refused to verify how many travellers had been detained, and reportedly continued to refuse access to legal counsel, even after being presented with federal court orders requiring it.

According to The New York Times, 721 people were denied entry or boarding for the U.S. over the weekend.

Amid the ensuing confusion, Bannon quietly replaced the Chairman of the Joint Chiefs of Staff and Director of National Intelligence on the U.S. National Security Council. To what end remains to be seen.

When Marco Rubio sought information from the State Department concerning his own constituents, officials acting under orders refused to discuss the matter.

Suddenly, the en masse departure two days earlier of the entire top echelon of the Foreign Service department made a lot more sense. Perhaps they wanted no part of the bedlam about to be unleashed. Indeed, 1,000 State Department diplomats and officials signed a dissent cable harshly protesting the terms of the ban.

As upheaval unfolded in capitals across the globe, the usual diplomatic channels were broken. American ambassadors in Ottawa, in Paris, London, Berlin, Tel Aviv, and almost everywhere, had been dismissed by Trump, effective January 20.

America’s top national security officials were all blindsided by Trump's order. Defense Secretary James Mattis, Homeland Security Secretary John Kelly and the now confirmed Secretary of State, Rex Tillerson, were left unaware of the contents of the Executive Order until Trump signed it.

Trump’s entry ban is being attributed to an extremely small circle — most likely Bannon and his whiz kid, the 31-year-old Stephen Miller. That neither has legal training or substantive experience in government was apparent from the most abysmally incompetent rollout of a presidential policy in living memory.

Joe Scarborough discusses Stephen Miller's role at 2:00 in the video

Then, in a freakishly bizarre twist, it emerged that the order was drafted by congressional staffers who worked surreptitiously under a non-disclosure agreement that barred communication even to their own employers. Not even the Republican chair of the House Judiciary Committee, to whom these staffers reported every day, was aware of what they were up to.

None of this will calm nervous GOP elected representatives, who are becoming increasingly vocal about their displeasure. As a warning shot signaling displeasure, at least two Republican senators are opposing Trump’s Education Secretary nominee.

Leaks now gushing out of the porous Oval Office portray an administration in disarray. To read The Washington Post and New York Times, the president’s inner circle resembles nothing so much as a bed of snakes that despise each other as much as their sworn enemies.

It may all be a clever ruse. Maybe in some genius playbook somewhere it’s a great idea to shock and destabilize the most powerful government in history by making enemies everywhere while looking inept, sloppy, and undisciplined.

Maybe the plan is that there's a big political win for a miniscule coterie that attacks the press, the intelligence community, military and intelligence-sharing allies, trading partners, the Foreign Service, the Department of Justice, each other, other Republicans, Muslims, women, and minorities.

Maybe Trump’s tiny inner circle of puppeteers really can take the world’s most powerful economic engine and most prosperous, stable, powerful, educated, diverse and thriving democracy, and turn it into a white supremacist authoritarian nightmare in a matter of weeks.

It is important to understand

It is important to understand the concept of "Anti-Fragile" - things that gain from disorder.
https://youtu.be/S3REdLZ8Xis

Given Bannon's cross pollination with Goldman Sachs, it is very likely he is pursuing an Anti-Fragile strategy, just like Mercer is (see Linda's missive about fake news in Canada). The outcome doesn't matter to Bannon, all that matters is that disorder (volatility) is created. Naomi Klein hit upon this with Disaster Capitalism.

Hedge fund people like Mercer and George Soros profit from volatility. It isn't so much the policy outcomes that matter, but rather the disorder created in the battle over those policies.

For regular people, Taleb points out that it is enough to know that the presence of fragility can be detected.

So the question is: who is fragile, who is not. That is what our pundits need to be looking at.

Politico confirms Bannon's pursuit of Anti-Fragile strategy...."Antifragile—which has been read and circulated by Bannon and his aides—reads like a user’s guide to the Trump insurgency."
http://www.politico.com/magazine/story/2017/02/steve-bannon-books-readin...

I wouldn't say most stable or

I wouldn't say most stable or educated or thriving nation. US students do not rank at the top. They are probably in this mess now because poorly funded public schools are not able to do their jobs producing well-informed citizens. The intention of DeVos appeared to be the further erosion of education of all but the children of the wealthy. Tyrants prefer a citizenry that is uneducated and therefore easier to manipulate and control.