A Liberal minister spoke about his past as a bus driver. Tories started laughing 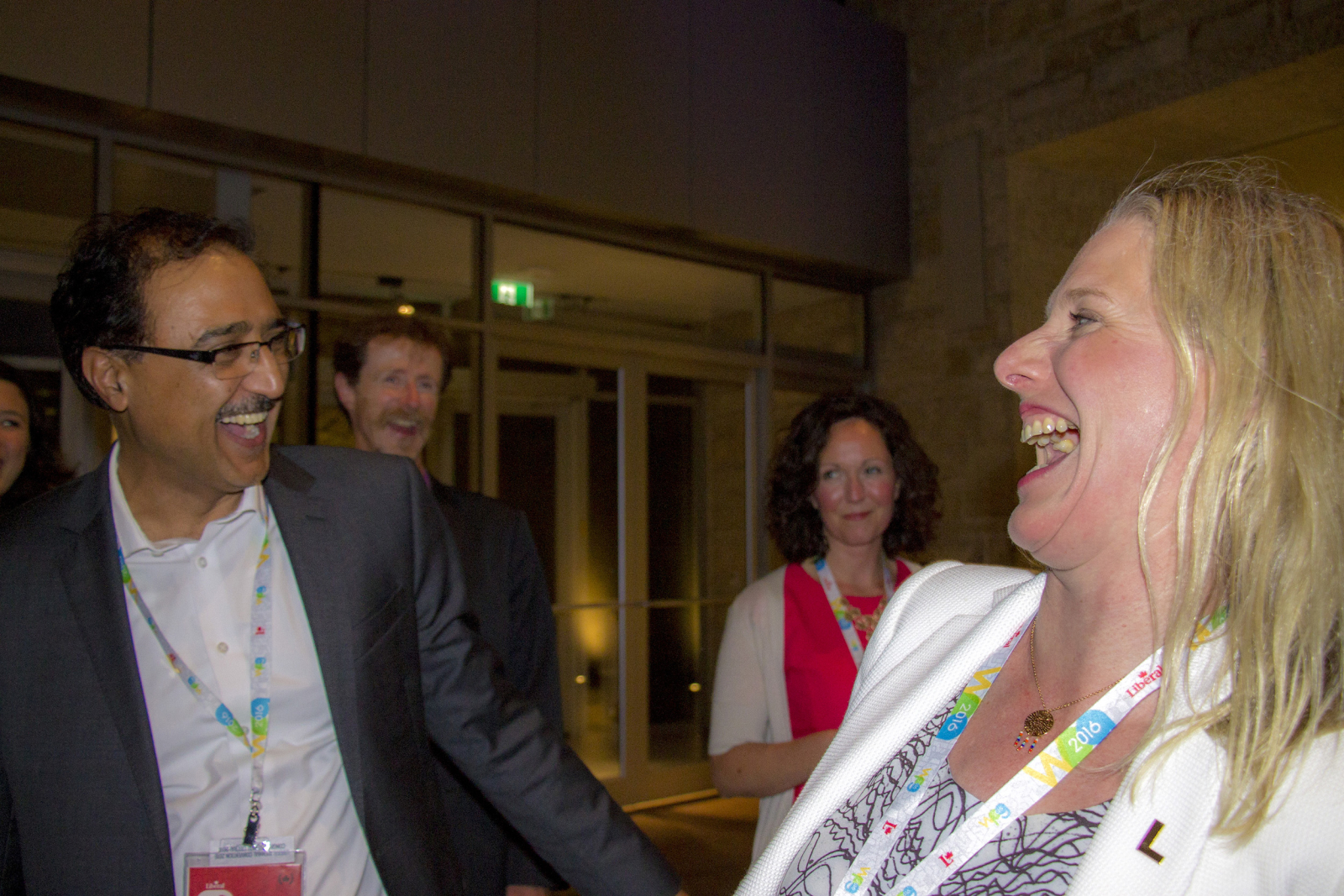 Liberal Infrastructure Minister Amarjeet Sohi is lamenting what he described as an "unfortunate" expression of laughter erupting from the opposition Tory benches in the House of Commons this week after he spoke about his past as a bus driver in Edmonton.

"It was a very unfortunate expression of ... laughter that was done by the opposition," Sohi told reporters after the daily question period in the Commons on Thursday. "Whether they apologize or not, that’s up to them, but we are focused on my work and we are here to focus on delivering the commitments that we made to Canadians."

The laughing incident arose after backbench Liberal MP Don Rusnak, who represents a federal riding in the Thunder Bay area of northwestern Ontario, asked Sohi if he could talk about the benefits of the government's efforts to support public transit.

The question fell under the category of what is known in federal politics as a "planted question" asked by a government backbencher. These types of issues are regularly raised by the government in the House of Commons, normally designed to elicit a pre-rehearsed response or soundbite that promotes a government policy.

Sohi began his answer to Rusnak's question on Tuesday by highlighting his past work as a bus driver and then expressing condolences for a Winnipeg bus driver who had been stabbed the night before.

A video of Tuesday's incident shows that several opposition MPs laughed after Sohi spoke about his previous job. Several Liberal ministers shook their heads in disgust over the laughter. But it wasn't immediately clear if the laughter was over Sohi's former job, or whether the Tories were expressing skepticism about the minister's sincerity.

Sohi said he didn't want to allow the laughter to distract from his message and his current job to deliver billions of dollars in new federal infrastructure money to Canada's communities.

"Well, I rose in the House to convey my deepest condolences and thoughts and prayers with a Winnipeg bus driver who was stabbed while performing his – his duty and service to his community, and I wanted to do that as a former bus driver who have seen, you know, violence happening on transit facilities," he said. "Obviously, I did notice the laughter, but I was there to convey a very, very important message, and that message was to show our support and thoughts and prayers with the person who was stabbed while serving – serving his community."

Conservative MPs laugh in the background after Liberal Infrastructure Minister Amarjeet Sohi speaks about his past as a bus driver. House of Commons video.

Sohi is one of only four Liberals elected in Alberta and he was appointed to cabinet by Prime Minister Justin Trudeau after also serving as a city councillor in Edmonton.

"These kind of expressions of disrespect are not going to stop me from focusing on what I need to focus on, which is delivering on behalf of Canadians," said Sohi.

Responding to a Liberal complaint about the laughter on Wednesday, former Conservative cabinet minister Candice Bergen, now the opposition house leader in the Commons, dismissed suggestions that her Tory colleagues were disrespectful.

"We all come from various backgrounds, and that is why we are called the House of Commons. We represent the people: farmers, bus drivers, receptionists. We represent everybody," Bergen told the Commons on Wednesday. "There is all kind of laughter that occurs here. We absolutely respect and honour all of the jobs that we have done, and the experience that we bring to this House."

The incident comes during a week in which the Tories were hammered by the Liberals for not supporting a motion in the House of Commons to denounce racism. Conservative leadership candidate Michael Chong distanced himself from his colleagues by supporting the motion that was introduced by Liberal MP Iqra Khalid to denounce Islamophobia.

Federal Liberals party it up in Winnipeg

Conservative leadership candidates have talked about protecting us common folk from the depredations of the elites in Canada as if the word does not describe their own upbringing and attitudes. If Tory MPs laugh at a man because he worked in a necessary occupation as a public service, we know where their sympathies truly lie.

We have to be careful to

We have to be careful to distinguish between the Muslim culture, people who subscribe to the Islamic faith, and the Islamic religion itself. We tend to equate the three as if they are the same thing.

Muslims are a cultural group of people comparable to Chinese or Indian people. And by the way, I have good friends among all these cultures.

Muslim people can be of Christian or Islamic or other faiths. Any person, white, Muslim or other, can claim to be of the Islamic faith. People who do follow Islam are not necessarily Islamic in all ways Islam, any more than a Christian is a Christian in all ways Christian. So, it is important that we always understand there are differences between the people who follow a faith, and the faith itself.

It is not the mandate of Muslim people to kill non-Muslim people, but it is clear that for many Islamic followers, they believe it is their mandate to kill non-Islamic people, which they call 'infidels'. This statement is not an expression of hatred or 'Islamaphobia'. It is a statement of historical and present fact, based on the countless times we have seen people claiming to be followers of Islam, who commit appalling crimes against infidels in the name of Allah. Such appalling crimes are often committed against muslims too, who commit the sin of co-operating with infidels. In other words, if a bomber kills 50 muslims along with 25 infidels, then that is simply Allah's will and serves those Mullims right for being with the infidels. This is according to people who claim to be followers of Islam.

There are Christian followers who claim that the Bible says homosexuality is against God's will, and same-sex marriage is non-Christian. As a Christian myself, I believe no such thing. So, I don't expect to be condemned because I am Christian. I consider it entirely reasonable and appropriate to question churches and individual who claim to be Christian and utter such hateful positions.

I also believe it is entirely reasonable to question whatever religion might suggest that we hate people because of their sexual orientation, their choice of marriage partner, or their religious adherence. The Jesus Christ I know, never promoted hatred or exclusion of any kind, but this does not mean we cannot question Christian churches and people who claim to act in the name of Christ, as they carry out their hateful agendas.

Some of the readings I have done on the subject of Islam, suggest that the founder of Islam, Mohammed was a murderer, rapist and pedophile who claimed to be a messenger of God, and who directed the penning of a doctrine no less evil than Mein Kampfm, which Islamic followers now call the Quran. The problem is that we have no English translation that Islamic experts agree to be accurate. So we can neither tell whether claims about its message are correct, or incorrect.

Given the erratic and evil behavior of millions of people who claim to be Islamic now fighting under the label ISIS, I have to believe that there may be truth to the claim that Islam and the Quran itself is an evil doctrine comparable to Mein Kampf. God knows what the Quran actually says, given it has never been translated into a modern language. Instead, we must rely on self-appointed Imams some of whom are outright killers and warlords. With so little vetting of who speaks for Islam, it would not be surprising if very few Islamic followers have a clue of what the Quran actually says,

I am not a hate monger. On the other hand, I do not believe that anything is inherently good simply because it is called a religion. We should never judge anybody simply because of their culture or their religion because that is prejudice, and prejudice is the epitome of ignorance and evil. On other hand, telling me that the Quran is a book of peace because many people claim it is, is the equivalent of claiming that Mein Kampf was a good book because so many people believed it was. The comparison is intended because, in the first forty years of my life, I have yet to see anything come of the Islamic religion that has not been repressive or evil. I have met many Muslims and even followers of Islam, whom I believe to be desirable friends to keep, But, I have yet to gain any confidence whatsoever that the Islamic religion is anything other than a doctrine that means harm to all non-Islam believers, and seeks eventual dominance of the world.