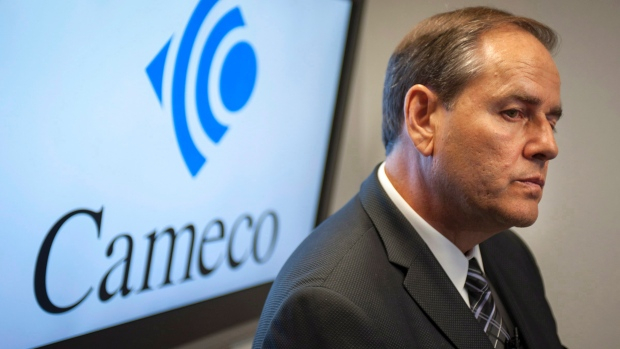 While Japan and its surrounding waters continue to bear the brunt of the catastrophic 2011 Fukushima nuclear disaster, its economic aftershocks are striking the mines of northern Saskatchewan.

TEPCO has been unable to run its nuclear plants for 18 months due to new government regulations and has cited a ‘force majeure’ event to cancel its remaining deliveries from Cameco: almost 9.3 million pounds of uranium through 2028. In legal terms, this is the equivalent of invoking an unforeseen ‘Act of God.’ Cameco emphatically rejected the termination notice. If negotiations fail, the parties may proceed to international arbitration.

“We've worked with eight of the 11 Japanese utilities on a number of things to help them with their difficult circumstances,” Grant Isaac, vice-president and CFO of Cameco, said in a recent conference call with investors and media. He noted that the risk of contract termination was always looming but “what's happened here with TEPCO really is a departure from the successful commercial relationships we've had with the others, including TEPCO, post-Fukushima.”

The uranium market has always fluctuated according to unforeseeable geopolitical shifts, but producers around the world now find themselves in a persistent slump, largely owing to the Fukushima effect. Global prices of uranium have fallen 50 per cent since 2011, along with stock value and overall profitability.

Uranium stocks may have bottomed out

Public perceptions of the nuclear industry have also been permanently tarnished. After a series of public protests in 2011, the German government of Angela Merkel reversed its energy policy and pledged to shut down 17 reactors by 2022. These plants had met 20 per cent of the country’s energy needs. In Britain, Toshiba recently sold its stake in an unfinished English plant and announced intentions to stop building new reactors altogether.

The sting has also been felt in Khazakstan, the world’s largest uranium producer by volume. In January, state-owned Kazatomprom announced a ten- per-cent cut in output due to poor market conditions and global oversupply.

But just as fissures precede fission, there may be hope for Cameco, demonstrated in a discrepancy between market potential and current performance. In December, Palisade Research confidently declared that uranium stocks had finally bottomed out, with nowhere to go but up.

According to the Nuclear Energy Institute, there are currently 60 nuclear units under construction in 15 countries worldwide, the bulk of which will be operational by 2025 – there are also more than 160 others in the licensing and advanced planning stages. More than half of the reactors under construction are in China (20), Russia (seven) and India (five).

“Large, non-emitting baseload generation is of particular value for such economies, as reliable electricity is a key indicator of economic progress and modernity. Nuclear plants, while capital intensive up front, are 60-80-year assets delivering vast quantities of electricity, cleanly and reliably,” John Keeley, spokesman for the Nuclear Energy Institute, said in an interview. “A single 1000 megawatt nuke can power a city of 750 thousand people.”

Manage as if difficulties will persist

While the potential for another Chernobyl or Fukushima exists with the unanswered question of how to dispose of radioactive waste, nuclear energy nonetheless falls into the ‘clean energy’ low-emission spectrum. While solar, tidal, and wind are cleaner options, the technology and infrastructure has not progressed enough to satisfy the energy needs of industrial megacities.

Small but booming economies with densely populated cities, like South Korea and the United Arab Emirates, are increasingly turning to nuclear alternatives for their power needs. This will become ever more prevalent as these nations attempt to reduce greenhouse gas and carbon emissions, especially under the 2015 international Paris Agreement.

These new plants will need fuel, and troubles aside, Cameco and Saskatchewan are still sitting on plenty.

“We’ve been saying for some time that uranium prices are neither rational nor sustainable. Indeed, I would have to say that market conditions in 2016 were as tough as I’ve seen them in 30 years,” Tim Gitzel, president and CEO of Cameco, said in the conference call with investors and media. “Ultimately, it’ll be the return of term contracting and meaningful quantities that will signal a transition to a more positive market environment. Until then we will manage our business as if difficult market conditions will persist.”

Did this company engineer the largest tax dodge in Canadian history?

It's hard to find any

It's hard to find any compassion for a company that provides the deadly fuel for a power plant that will cause unimaginable human suffering. Fukushima is still melting down and with nightmare like repercussions. The worst is yet to be seen.

Nike Air Max 2015 Heren Kopen
Lessen your outfits stack when you find yourself preparing for the trip. You should quickly have the ability to package per week of garments for the journeys. Select clothes which has versatile expertise and goods that can be blend-and-matched up very easily. In case your vacation is going to be over one week, anticipate cleaning instead of more than-preparing.

There is lots to learn about major depression and just how it might impact you. If you think that you are unable to get free from it on your own, you may want to seek the advice of a medical expert. They should be able to look at you together with determine if prescription medication or intervention is necessary.

Nike Air Max 90 Shoes
For those who have Diabetes then alcohol is not your close friend. Alcoholic drinks are filled with sugars which will not aid your glucose levels. A cup of red wine has much more sugar than challenging liquor and beer will has significantly less sugars than red wine but greater than liquor.

Be suspicious of the items pain relievers you employ. People who have symptoms of asthma do not use aspirin and NAIDs, or Non-Steroidal Anti--Inflammatory Medications, like Advil, Motrin, and Aleve, because there is a chance of those getting worse your asthma symptoms. Instead, try to use acetaminophen, far more often called Tylenol, to help you alleviate your discomfort.