Don't despair, you can save the world within your reach 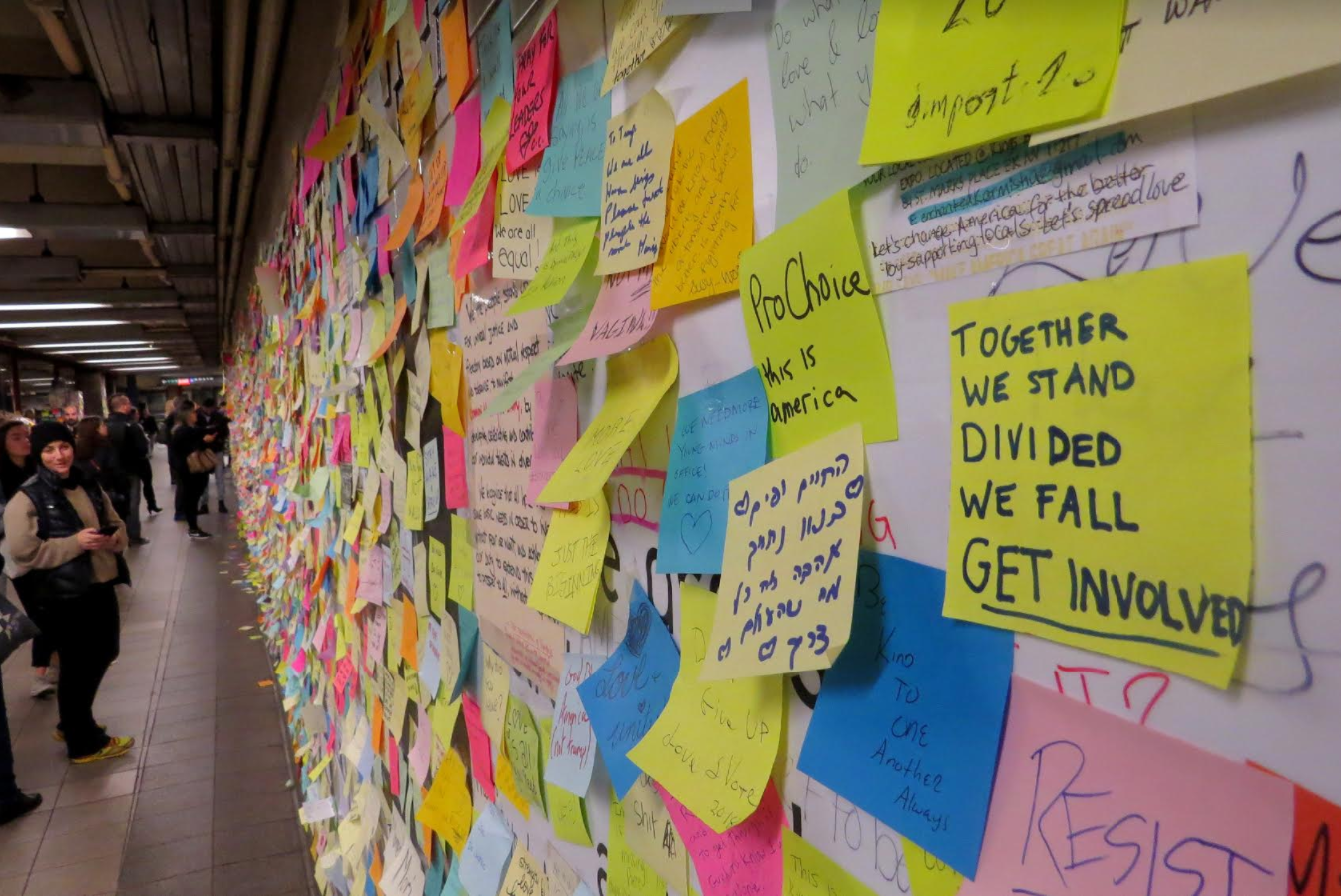 Sticky notes with messages of encouragement plaster the walls of a New York City subway station a few days after President Trump's election in November 2016. Photo by Jens Wieting, Sierra Club BC
Previous story
Next story

There has barely been a day without terrible news since Donald Trump was elected president of the United States.

To get through this, we have to keep in mind that we are 7.4 billion people on our planet, that only 320 million live in the U.S. and only 63 million of them voted for Trump. We must stand in solidarity with the people in the U.S. fighting to defend civil rights, minorities and the environment.

It is important for both for the planet and our imperiled neighbour, that the seven billion of us outside the United States speed up progress for global prosperity, protecting nature and saving the climate. The importance of this became concrete to me when I shared the story of British Columbia’s Great Bear Rainforest in New York a few days after the November presidential election.

The Great Bear Rainforest legal and policy framework agreements were announced a year ago, on Feb. 1, 2016 by the B.C. government, the region’s First Nations, a group of forestry companies and environmental organizations. Our delegation from the Rainforest Solutions Project (Greenpeace, Sierra Club BC and STAND) was invited to New York to accept the Fuller Challenge, awarded by the Buckminster Fuller Institute, for our role in the Great Bear Rainforest Agreements.

Many people around the world were still in shock, but we felt fired up by the diverse, inspiring crowd at the award ceremony in Brooklyn and we experienced the power of sharing a story of hope at a time of despair.

We can inspire the world

Buckminster Fuller (1895 – 1985) and the institute founded in his name have inspired countless change makers around in the world. Fuller was an architect, author and inventor driven by the desire "to make the world work for 100 per cent of humanity in the shortest possible time through spontaneous co-operation without ecological offense or the disadvantage of anyone."

The Fuller Challenge awarded to the Rainforest Solutions Project acknowledges efforts that pursue a “whole systems approach to understanding and intervening in complex and interrelated crises for wide-scale social and environmental impact... regionally specific yet globally applicable and... a truly comprehensive, anticipatory, integrated approach to solving the world's complex problems.”

This is what the Great Bear Rainforest Agreements accomplished: collaboration, science-based decision-making, respect for nature’s limits and indigenous rights. We have to pursue the same principles to tackle the world’s most urgent problems, from armed conflicts, to economic crisis and climate change.

There are few places in the world that are better positioned than Canada and British Columbia to inspire the world; and after three years in a row breaking global warming records we have no time to lose.

Mend what is in your reach

It is true that the new U.S. government is already undermining international co-operation and is taking us backwards on a number of issues. But we cannot allow the Trump administration to undermine our resolve and let the world go to hell in a hand basket. Whatever struggle you are involved in, large or small, you are making a difference.

The American poet Clarissa Pinkola Estes said: “Ours is not the task of fixing the entire world all at once, but of stretching out to mend the part of the world that is within our reach. Any small, calm thing that one soul can do to help another soul, to assist some portion of this poor suffering world, will help immensely. It is not given to us to know which acts or by whom, will cause the critical mass to tip toward an enduring good."

We must succeed because what we do causes little ripples that spread out. New Yorkers who came to hear the story of the Great Bear Rainforest felt strengthened and a little more hopeful because of what has been accomplished for community well-being and ecological integrity in one the largest coastal temperate rainforests on the planet.

We need more stories like the one of the Great Bear Rainforest to inspire and remind people everywhere that a better world remains possible in these challenging times.