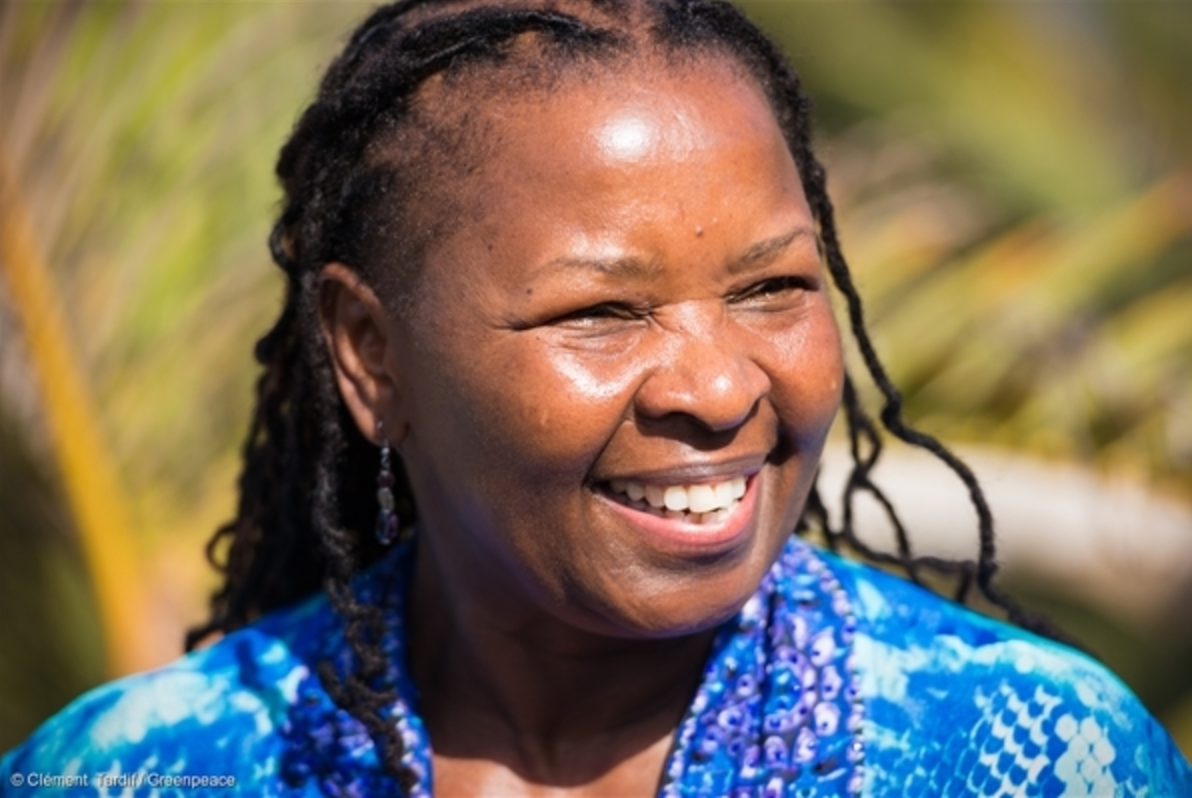 It was on Feb. 28, 1992 when Njeri Kabeberi got her first taste of grassroots activism. Kenya was in a state of brutal political repression and terror under then-president Daniel arap Moi, whose government ruthlessly interrogated, detained and tortured opponents.

She was working for an insurance agency at the time, but was asked by Kenya’s most famous female political and environmental activist, Wangari Maathai, to help out with a hunger strike for the elderly mothers of political prisoners. She was asked to file a petition to Kenya's attorney general, and to escort the elderly ladies to and from the protest.

At the time, Kabeberi had a young son and aimed to be home later that evening. She ended up staying an entire year, through beatings, tear gas and heated negotiations, until the last political prisoner was released on Jan. 19, 1993.

“I was a changed human being”

“I could never go back to my work after that; I was a changed human being,” Kabeberi said in a National Observer interview. “It made me understand the power of women… So for me, a woman can never fail.”

The power is out at her hotel in Johannesburg, South Africa and the connection from her cell phone is poor, but the warmth in Kabeberi's voice is audible as she speaks about the activism that has since taken her all over the world.

Despite the early victory, and dozens of similar demonstrations of female leadership across the continent (including her mentor at the hunger strike, Wangari Maathai, who was later awarded a Nobel Peace Prize) African women still face significant gender-related barriers to basic human rights, education, and economic success.

As executive director of Greenpeace Africa, Kabeberi feels extra pressure to succeed as the leader of a continental organization because she is a woman.

“If I don’t do this job right, the blame might be on my gender — not that I was incompetent as a human being, but as a woman,” she tells National Observer. “That is always lingering in the back of my head, and therefore, I cannot afford to let the women down.”

If Kabeberi’s superstar track record is any indication, however, failure in her role as executive director isn’t likely: since the hunger strike in her youth, she has served as development coordinator for Amnesty International in East and Southern Africa, a board member of the Kenyan Human Rights Commission, and Kenya’s representative at The Netherlands Institute for Multiparty Democracy.

At one point, her attempts to broker peace amidst a violent federal election were considered so powerful, she was named on an anonymously-authored hit list of “traitors” in Kenya. She received so many death threats between 2007 and 2008, she went into hiding for several months. One year later, she was awarded a Democracy Ribbon from the Netherlands, and a Humanity Award from the Chamber of Lawyers in Frankfurt, Germany, and in 2010, she won an International Labour Organization Wedge Award for championing women’s rights in Kenya.

It may look to an outsider as though she has given up an action-packed life on the picket line for a cushy desk job, but the veteran activist says working for Greenpeace isn't for the faint of heart. The stakes are higher than ever, says Kabeberi, as the climate gets hotter, and floods and droughts continue to strike African countries in full force.

Climate action for 54 countries... at once

Climate change was not a central issue in Kabeberi's life as she raised children and campaigned for gender equality, freedom from oppression, and a healthy democracy in Kenya.

But as she started preparing for her Greenpeace Africa interview in 2016, she put the pieces together. Human rights are inextricably linked to climate change, she realized, particularly on a continent that already suffers from food insecurity, scorching temperatures, and a severe lack of clean drinking water infrastructure.

Suddenly, it felt as though she had been preparing for the job all her life.

“Even if we did well in the human rights and governance area, but then lost our planet, there would be nobody to fight for,” she explains. “It’s not only about human beings. It’s about the animals that live there, the trees, and everything that makes us live in harmony."

Kabeberi has her work cut out for her. Unlike other Greenpeace chapters, which manage campaigns in a single country, hers manages climate action for an entire continent of 54 culturally and geographically diverse states.

It’s difficult to build support for Greenpeace Africa campaigns, she adds, when the majority of Africa’s 1.2 billion residents have a low level of awareness about climate change and a long list of other, more visible challenges. The impact of climate change varies by region and there is no pan-continental solution. Yet, as a continent, Africa can’t afford to wait.

“We are facing the impact of environmental degradation and climate change much harsher than most of the other continents, because economically and 'infrastructurally,' we are not as prepared,” Kabeberi says. “And the challenge has not been that we can’t find people (to hire), the challenge has been the amount of resources required to invest properly in Africa."

Africa dominates the World Bank’s list of countries most at risk from climate change’s five major threats — drought, flood, storm, rising sea levels, and agricultural uncertainty. Of particular concern are Malawi, Sudan and Senegal, the latter of which has already started to lose entire villages to flooding.

Despite Africa being the second-largest and second most-populous continent, its contributions to global greenhouse gas emissions are insignificant. Europeans emit between 50 and 100 times more emissions than the typical African country per capita, while Americans emit 100 to 200 times more, according to data from the United Nations Environment Programme.

At an organizational level, Greenpeace Africa recognizes that “Africans aren’t responsible for climate change” and “industrial nations are the worst offenders,” but that ultimately, the planet belongs to everyone and all of humanity must care for it. The chapter, launched in 2009, is primarily funded by Greenpeace International, but is campaigning for funds from individuals, trusts, and foundations that align with its mission.

“One of my challenges as executive director is to find ways and means of forming a viable green movement in the continent,” Kabeberi explains.

That doesn't mean all of Africa will need to get on board with climate action, she adds, but it does take a critical mass to put enough pressure on governments to change. Forming such a movement is a remarkable challenge, she says, but to make that task more manageable, Greenpeace Africa has chunked its initiatives into four key campaigns: protecting the Congo Basin from deforestation, stopping overfishing in West Africa, promoting ecological farming in the horn of Africa, and demanding a shift from fossil fuels to renewable energy in South Africa.

It has offices in South Africa, Kenya, Senegal, Cameroon, and the Democratic Republic of Congo.

The organization has met some success so far — in 2016, it petitioned local governments to support ecological farming, partnered with three of South Africa’s largest retailers to lobby for a national renewable energy framework, and in a special investigation, exposed how illegal fishing activities of the China National Fisheries Corporation compromised the security of West African marine resources.

It has also served as a watchdog on governments and energy policies; while Greenpeace Africa congratulated Kenya last year for suspending construction of an emissions-heavy coal-fired power plant on a UNESCO World Heritage Site, it lambasted the South African government for pushing forward with nuclear energy plans, despite ample opportunity to pursue wind and solar energy.

More than 75 per cent of African countries signed the 2015 COP21 Paris agreements committing to keep global warming below 2°C this century, but Kabeberi says there is often a gap between what governments legislate, and what actually gets done. Corruption has, she acknowledges, and will continue to be an obstacle to effective climate action in many African countries.

“In some cases, we have big corporations that are actually negating the legislation in different countries that are fighting against fossil fuels,” she says. “The corporations come with bigger money and I can only assume they’re using that money to influence the state.”

This alleged corruption not only makes Greenpeace Africa’s work essential, she argues, it also makes it dangerous. Kabeberi knows from personal experience that opposing those in power can be risky — the mother’s strike in Nairobi in 1992 is only one example.

This is where Kabeberi’s previous experience as a human rights activist and civil society worker merges with her work at Greenpeace: she knows how to manage and organize campaigns, interact with government leaders, and practice peaceful civil disobedience.

Empowering women in the climate battle

She also knows how to mobilize women, who time and time again, have proven themselves a force to be reckoned with on issues of governance and human rights. The obstacle, says Kabeberi, is rallying them around climate change and gathering the funds required to hire skilled campaigners, researchers, and environmental scientists.

"We haven’t tapped into the strong civil society that we know exists," she says. "You sometimes need a big action to trigger or a strong voice or something challenging to the citizens. I would like one day to say we have grown in numbers and that we are shaking the continent and actually making a difference."

By 2019, Kabeberi hopes that Greenpeace Africa will be a continent-wide organization — an unstoppable force with broad support and a diverse portfolio of campaigns. And it very well could if she has anything to do it.

According to the United Nations Development Programme (UNDP), climate change disproportionately affects women, who are more exposed and vulnerable because they are often poorer, receive less education, and are less involved in political and domestic decision-making that affects their lives. It will also disproportionately affect African women, and the UNDP estimates that the proportion of women affected by climate-related crop changes could range from 48 per cent in Burkina Faso to 73 per cent in Congo.

But women have won battles in Africa before, says Kabeberi, and with the hunger-striking mothers of 1992 as her inspiration, she hopes to help win this one as well.

"The level of organization of women, when they are committed to something, when they have good leadership, is very powerful," she says fondly. "Those women literally — it was the first open, risky strike or campaign in Kenya in the Moi government, and it was done by women, and it was successful. If a woman wants to focus on something, she can never fail.”