Melting at the roof of the world. Climate change comes knocking. Again. Louder. 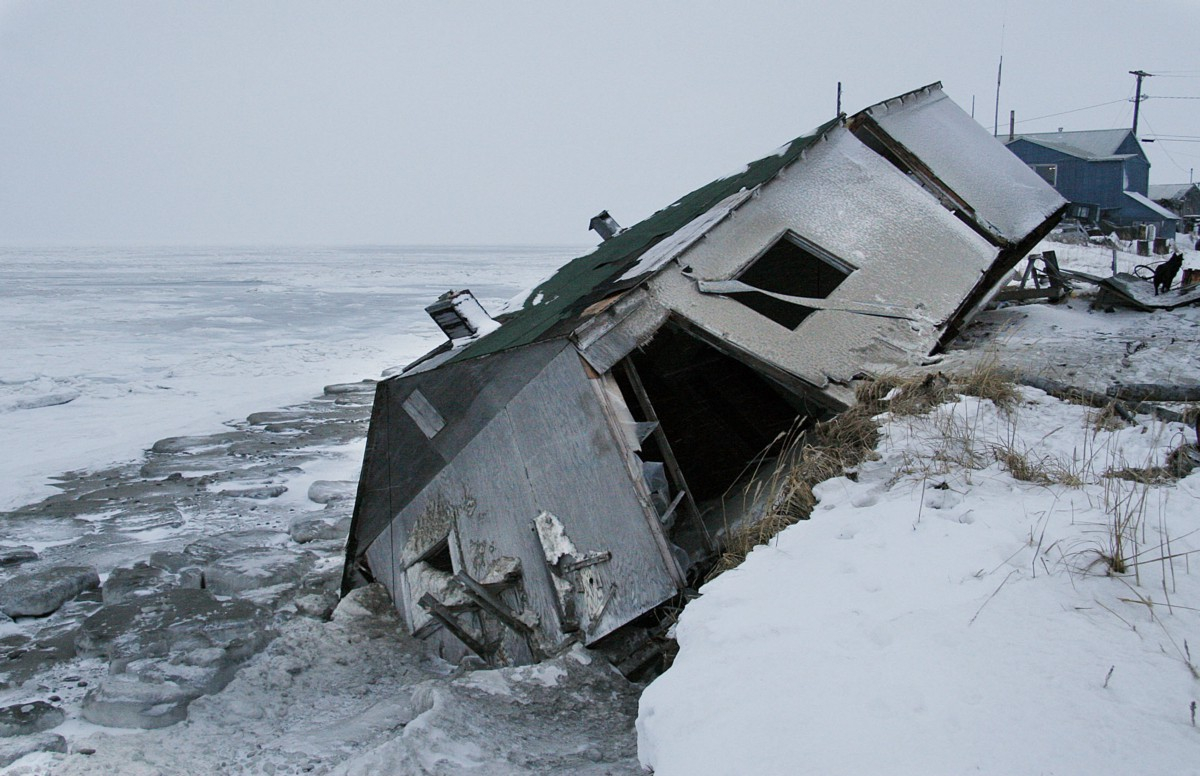 The Arctic landscape is collapsing. Photo by The Associated Press
Previous story
Next story

The most dramatic warming of the planet is happening in its coldest regions.

Sixteen years ago, National Geographic was already reporting on alarming changes in Inuit territory. The melting permafrost and warming temperatures were threatening Inuit communities and culture, and damaging the land and wildlife.

"Sea ice is thinning, and disappearing. Indigenous animals are moving farther north. And melting permafrost has loosened the ground enough to weaken foundations and cause homes to lean. This, plus rising sea levels, threatens to displace an entire community," National Geographic reported back then. The article described the Inuit of Nunavik as the "canary in the coal mine of climate change."

Since then, things have only gotten worse. A new study by researchers in the Northwest Territories shows that the melting of Canada's permafrost has accelerated to even more dangerous levels.

“Megaslumps” of carbon-rich mud are choking rivers and lakes and lighting the fuse on a massive carbon bomb, scientists say. 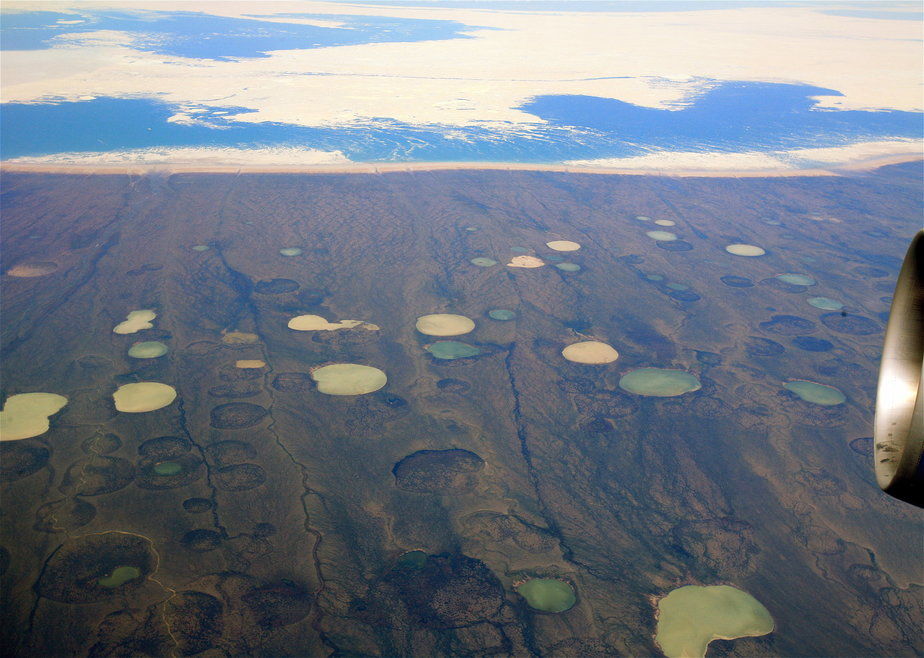 News of the melting permafrost should set off alarm bells in Ottawa and legislatures across the country. Canada's federal and provincial governments have the tools they need to accelerate the transition to a sustainable economy. The Liberals should make use of their valuable majority to take much faster action on creating green jobs and embracing innovative energy solutions.

For inspiration, they can look to a pragmatist, Hassan Yussuf, president of the Canadian Labour Congress. Yussuf's organization has demonstrated that Canada could create a million jobs for Canadian workers while combating climate change.

The labour leader is one of the growing generation of Canadian business and labour leaders recognizing the urgency of transitioning away from a fossil fuel economy. In this era of populist politics and the automation of traditional jobs, Yussuf's plan for a new generation of good jobs is more important than ever.

But, as we know, governments are cumbersome and too often cater to industry instead of their real mandate, which is to serve the public. And, when you think about it, clean energy solutions, the breakthroughs and the innovations, are really subversive to the fossil fuel industry's goals to improve shareholder returns on oil, coal and gas.

National Observer is committed to bringing you the stories of clean energy innovation and reporting on the many inspiring solutions to the climate crisis.

Here in Canada there are positive steps towards a pan-Canadian climate framework, but there isn't much sense of urgency behind Canada's clean energy transition. Our buildings are still heated by natural gas, our vehicles still run on gasoline or diesel.

For the most part, the federal government seems to hope the market will take care of things with a prod from carbon taxes and some investment in electric vehicle charging stations.

It’s a far cry from the progress in leading jurisdictions where governments are actively mandating the switch to clean energy. In the U.S., California simply made it the law that a rising percentage of new car sales have to be zero emission. It’s proven to be one of the most effective policies to combat global warming.

Over in Norway, almost half of the new cars registered last year were electric. Norway's transportation minister says it is "realistic" to phase out gasoline and diesel cars by 2025 — just 8 years from now.

Hassan Yussuf sees no reason why Canada should be left behind in what he calls the “clean growth century.”

“Canada needs to dramatically accelerate the shift to a green economy, and we know it can be done in a way that is economically and socially responsible, without leaving behind workers and their communities,” he says.

The Canadian Labour Congress’ plan, released in 2016, lays out a pathway to create one million new jobs and reduce climate pollution through investments in high-speed rail, building retrofits, public transit and clean energy.

The federal government will release its next budget soon and you’ll get an indication of whether Canada will accelerate efforts to build a sustainable economy.

One thing you can count on is National Observer telling you more in the coming weeks about the potential for revitalizing the economy and creating good jobs. You'll hear about the paradox of smog-choked China rising to dominance in the field of clean energy. You'll find out which jurisdictions are making the most progress and which policies have driven positive change.

National Observer is fully committed to covering climate change as the critical challenge of our age. You'll be seeing more coverage of the effects of melting permafrost and the ways climate instability is impacting people living in Canada's Arctic. National Observer will be investigating whether Canada's cities can expect an influx of climate refugees from northern regions.

Become a subscriber and you’ll get quality reporting on people and communities making a difference. You'll get hard-hitting investigations exposing the powerful interests that try to undermine progress. Like you, we want a stable and healthy future for our children.

I agree Canada needs to

I agree Canada needs to engage in the green economy in a mega way. Also, I agree the government is slow in moving in this directions, and alas not so slow to move in directions of fossil fuel promotion decisions.
These needs and the type of counterproductive actions from our government are the reason we citizens need to reclaim our democracy - make it democratic. Without "fair" elections, I do not see any government feeling any pressure to be accountable to its citizens. When the government knows citizens can vote their believes rather than strategically, elections become representative of citizens and politicians then must respond to citizen requests or lose their seats in the next "fair" election.

With a selfie prince smile and the confidence that the whole world loves them. our current government has abdicated from serving citizen's needs. Even though they have been internationally, chastised severely because of their climate decisions being counter to their lofty statements in Paris; they continue to celebrate their illusion of nonpareil, which they seem to think insulates them from reality.
I believe a majority government serves its party and a minority government or coalition serves citizens. True democracy in our government and institutions are intricately connected to a robust economy (green based for the future) and the environment. The three sustain each other or cripple each other.

The prevailing wind today at

The prevailing wind today at Fort McMurray is SE and shifting to South. I have suspected particulate from Asia blowing NE over Alaska and the Arctic was settling down and accelerating the thaw of the Arctic Ice Cap. In the early 70’s I was finding layers of soot and dirt when shovelling snow off the ice for fishing on isolated St. Ignace Island in Lake Superior. I had used a boat as late as January 11th one winter and a snow machine as late as April 23rd on Nipigon Bay..

Wiki has a Composite map of the volcanic ash cloud spanning 14–25 April 2010 from a view entered on the North Pole. Quite revealing;
https://en.wikipedia.org/wiki/2010_eruptions_of_Eyjafjallajökull
The 2010 eruptions of Eyjafjallajökull were volcanic events at Eyjafjallajökull in Iceland which, ... Consequently, a very high proportion of flights within, to, and from Europe were cancelled, creating the highest ... lavenders' like this one over the flight path of Leeds-Bradford Airport in England during the aviation shutdown.

Soot and Dirt Is Melting Snow and Ice Around the World - Latest Stories
news.nationalgeographic.com/.../140610-connecting-dots-dust-soot-snow-ice-climate-...
Jun 10, 2014 - New report highlights increased loss in Greenland ice cap from dust and soot. ... This matters because Greenland is mostly covered in ice, and ... Further, as Arctic Ocean ice thaws in spring and summer, more ... This is a trend that has accelerated since 2007, driven primarily by rising global temperatures.

Dirty snow and ice deteriorate quickly so particulate emissions maybe the biggest cause, with temperature increases caused by open water. It is always warmer on open water even in December on Lake Superior. You just have to walk a 100' inland and old man winter is alive and well. Nature is also a Freak Show, 3 winters ago our Great Lakes were 92% frozen over and this winter shore ice on rock outcroppings is minimal. At the moment it is - 15* C, when about a month ago Northern Ice Roads were closed temporarily because of a warm spell. Last weekend we had thunder and heavy rain, which is unusual but not uncommon. I used to work outside year round so you are attuned to weather variables. Wind strength is also a factor in whether Ice will form, or otherwise be constantly broken up by strong winds blowing waves under new formed ice. I have had the opportunity to travel along Lake Superiors shore for many decades observing natures ways, and i am sure the Arctic Ice Pack is susceptible to the same variables.

Nature is an unpredictable

Nature is an unpredictable Freak Show, there were snow drifts reported to be 9 meters high in Churchill Manitoba this past week. This makes me think of the heavy snows in California's mountain range, i think, twice as deep as normal. Also with the end of their predicted 25 year drought only after 5 years. The flooding damage and near failure of the Oroville Lake Dam caused the evacuation of close to 200,000 people. Ref:

Churchill 'like a ghost town' after blizzard buries town in snow - CBC
www.cbc.ca/.../manitoba/blizzard-churchill-mayor-mike-spence-shut-down-c......
4 days ago - Manitoba blizzard wallops Churchill, hampering emergency services ... Churchill in March snowstorm 0:10 ... It's a great place to weather the storm. ... Mayor Spence said the town is waiting for the winds to die down, so crews ...

If it was not for the soot and particulate issue settling down on Ice caps which accelerates thaw and increased temperature we may still have our snow capped peaks at Banff. I have not driven through there since 2007 so am not up to speed on whats left. It was alarming from my time spent in BC in the early 70's, as there was only one snow capped peak left. I am not sure if there has been any recovery. If the Ice fields have melted in Banff which help retain fresh snow pack it becomes a run-away train. But just like a bare spot on a Ski Hill, if someone does not take a shovel and cover it with fresh snow from the bush it spreads like wildfire.