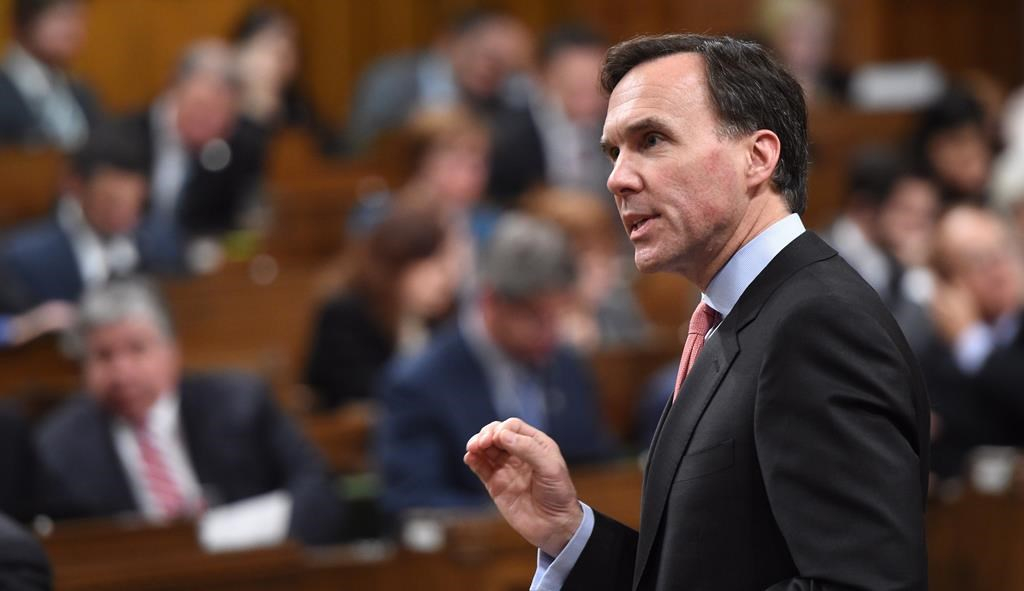 Minister of Finance Bill Morneau responds to a question during Question Period in the House of Commons on Parliament Hill on Tues. March 7, 2017. Photo by The Canadian Press
Previous story
Next story

Finance Minister Bill Morneau will introduce the federal government's latest budget on March 22 — his first amid the economic uncertainty of the Donald Trump era.

The budget, the Trudeau government's second since the 2015 election, comes as Ottawa and corporate Canada scramble to assess the risks of possible and unpredictable policy actions from the country's top trading partner.

Amid a persistent Canadian fear of negative economic fallout from the Trump administration's decisions, it remained far from clear Tuesday whether Morneau's budget will account for the unknowns.

Indeed, Morneau was far more interested in talking about how the budget will be a blueprint for navigating an evolving economy rather than potential economic threats lurking south of the border.

He billed the budget as one that will create jobs, help Canadians develop the right skills and ensure success in the "economy of the future."

When asked directly about the Trump-related risks, Morneau insisted that the government will continue building on the plan it started laying out in last year's budget.

The official Opposition Conservatives urged the Liberals on Tuesday to reassure Canadian businesses that they have no plans to impose any tax or fee increases.

Tory finance critic Gerard Deltell pointed to the Canada Pension Plan enhancement as an example of a Liberal change that has hit businesses with additional costs.

"If the Trump administration tables some new direction to have less fees and less tax for business, well, we must address it because it's very serious," said Deltell, describing Canada's business community as the backbone of the economy.

Deltell's colleagues also took aim at the Liberals. Moments after the budget date was announced in the House of Commons, Ontario Tory MP John Brassard jeered: "Hang onto your wallets, folks!"

The Trudeau government has been criticized since last year's budget for not outlining when it will bring the federal books back to balance following a string of projected annual, double-digit shortfalls until at least 2021-22.

They ditched pledges to run annual deficits of no more than $10 billion and to balance the books in four years. Instead, they have focused on reducing the debt-to-GDP ratio — also known as the debt burden — below the current level by 2019-2020.

In November, Morneau's fall fiscal statement predicted a deficit of $25.1 billion this year and a shortfall of $27.8 billion for 2017-18.

The Liberals have laid out a plan to run deficits as a way to invest billions into economy-boosting infrastructure projects over the coming years.

Many economists have supported deficit spending for infrastructure, but some have voiced concerns about the lack of a timetable to balance the books.

New Democrat Leader Tom Mulcair said the Liberals have failed to deliver on several of their campaign vows, such as smaller shortfalls and ambitious increases to First Nations spending.

"Mr. Trudeau's got to look at what he promised Canadians," Mulcair said.

The budget will follow a series of stronger-than-expected economic indicators in recent weeks.

But even with the encouraging results of late for indicators like job creation and trade, Conference Board of Canada chief economist Craig Alexander said the "slightly" better outlook since the start of the year still has a huge cloud hovering above it.

"In the wake of the election victory by Trump, a lot of uncertainty was introduced into the economic forecasts," said Alexander, who participated in Morneau's Jan. 13 meeting to hear projections from private-sector economists.

Trump's famous unpredictability means it's impossible to know for sure the challenges Canada could end up facing, Alexander added.

"When we actually have the budget, it will be interesting to look at it in a lens of how has the Canadian government responded to potential Trump issues. That's not normally the way we read a budget."

As usual, the state of the country's fiscal trajectory will also draw lots of attention.

In December, the Finance Department released numbers predicting that, barring any policy changes, Ottawa could be on track to run annual shortfalls until at least 2050-51. It warned that if such a scenario played out the federal debt could climb past $1.55 trillion by that same year — more than double its current level.

When asked Tuesday if his budget would do anything to bring the books back into the black sooner, Morneau refused to be knocked off his script.