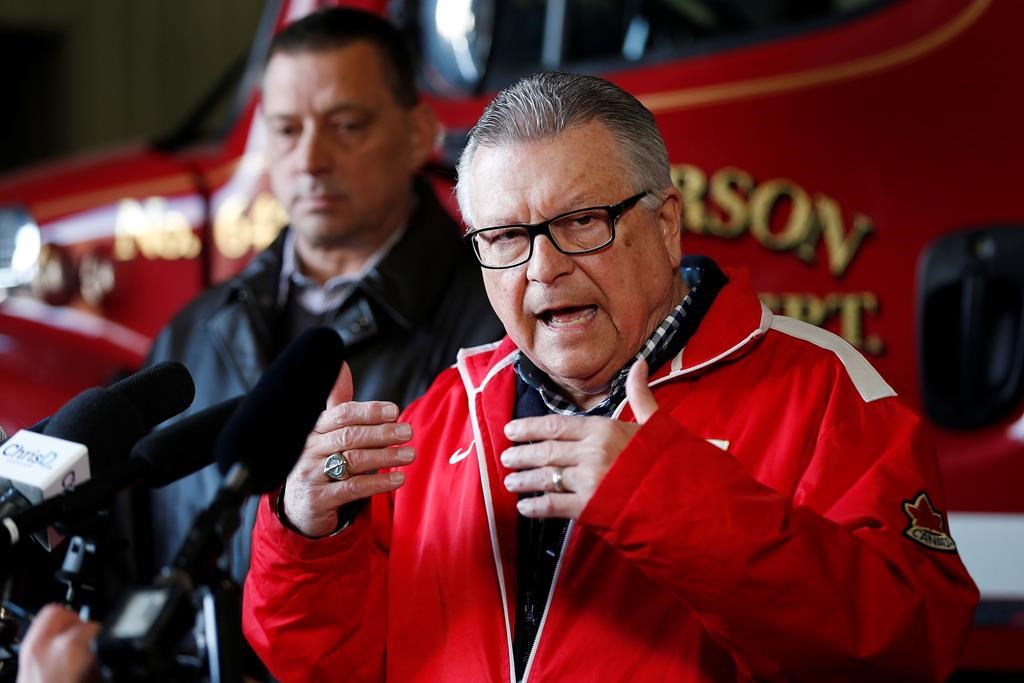 Ralph Goodale, Minister of Public Safety and Emergency Preparedness, speaks to media as Greg Janzen, Reeve of Emerson-Franklin listens in after a visit with officials at the fire hall in Emerson, Man. Photo by The Canadian Press
Previous story
Next story

Canada's national police force and border watchdog say they have the resources they need — for now — to deal with the influx of people entering the country illegally in search of asylum, the federal minister in charge said Tuesday.

Public Safety Minister Ralph Goodale told reporters that the RCMP and Canada Border Services Agency "have affirmed to me and to the prime minister and to the cabinet that the resources they have and the legal tools that they have are appropriate and sufficient to enforce the law."

But one what-if scenario was on everyone's mind at the cabinet meeting Tuesday on the issue — hundreds of asylum seekers suddenly becoming thousands when the weather turns warm.

Several federal agencies are planning for that possibility as they contemplate the point at which an increasing number of newcomers suddenly demands both a political and an operational response.

The latter would mean more border officers, more judges to evaluate immigration claims and more local shelter beds. Officials are also exploring whether the risk of spring flooding in Manitoba poses a threat to those crossing from the U.S.

For now, however, no new resources are being requested or offered.

"At this stage, the situation is being very properly addressed by our security agencies, both the RCMP and the CBSA," Goodale said. "If they feel there is a tool or more resources that they need to deal with the situation, they will certainly let us know."

The Immigration and Refugee Board, which is responsible for deciding the validity of the asylum claims, is managing the increase internally, Immigration Minister Ahmed Hussen said in an interview with The Canadian Press.

"We work very closely with the IRB and we're always happy to look at ways we can help them do their job faster and more efficiently."

Beyond the operational issues, the Liberals are also grappling with how to balance the legal reality of the situation with their preferred political message of Canada being open to immigrants and refugees.

"There may be this kind of assumption that somehow you jump across the border and that's kind of a free ticket to Canada. Well, it's not," Goodale said.

The Opposition Conservatives are seizing on the issue as evidence of a government that's not protecting Canada's borders.

"You've got to send a strong message that we consider our borders sacrosanct," said Tony Clement, the Conservative critic for public safety. "We are an open and welcoming country, but we don't want people to get hurt in their migration here, and we want to obviously ... protect our sovereignty."

Those themes will likely be part of a meeting that Goodale and Hussen have later this week with their American counterparts.

Preliminary analysis of some of the people entering through Quebec has suggested they're all getting U.S. entry visas issued by the American embassy in Saudi Arabia, The Canadian Press has learned.

Canadians will seek to impress upon the Americans that they need to look into how that's happening, say sources familiar with the preparations.

Meanwhile, the notion that asylum seekers fear poor treatment in the U.S. under Trump will also be on the table, as Canadian officials seek assurances that the American system will remain untouched by immigration policy overhauls.

An executive order that originally sought to temporarily block from the U.S. immigrants from seven predominantly Muslim countries is believed to be behind much of the traffic into Canada in recent weeks.

A revised version signed by Trump on Monday dropped Iraq from the list of banned countries, but that's not likely to do much to dampen the motives of those eager to flee the U.S. and come to Canada.

Canada is seeking reassurance on the U.S. asylum system because of the Canada-U.S. Safe Third Country agreement.

That deal, which precludes people from making asylum claims at official land border points, requires that the U.S. asylum system continues to function, something that many experts have said in recent weeks is impossible given the current political climate.